This afternoon, Deputy Defense Secretary and robotics booster Bob Work will christen the largest unmanned surface vessel in history. At 130 feet long and not quite 140 tons displacement, DARPA’s Sea Hunter dwarfs previous robotic boats, giving it the ruggedness and fuel capacity, about 70 days’ worth, to cross oceans on its own power without a manned mothership. But Sea Hunter, aka ACTUV, is still much smaller than the Navy’s smallest manned warship, the Cyclone-class coastal patrol boat — 179 feet and 380 tons — let alone a frigate or destroyer. At just over $20 million apiece, it is vastly cheaper than manned craft, too.

Sea Hunter‘s size and cost open an intriguing new niche in naval operations. Imagine swarms of small, inexpensive, and above all expendable unmanned craft scouting ahead of or escorting traditional task forces. If the roboats get blown up, it costs no lives and relatively little treasure. If the roboats survive, their sensors provide invaluable intelligence to the fleet, and intelligence can win wars. 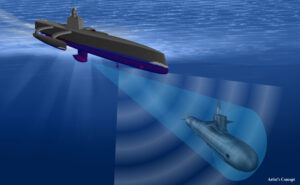 Sea Hunter is currently kitted out as a sub-hunter, with sonar to find submarines: Its program name is ACTUV, a nested acronym for ASW (Anti-Submarine Warfare) Continuous Trail Unmanned Vessel. But that’s arguably a misnomer. ACTUV is designed as a modular “truck” with the physical capacity and software “hooks” to install a wide variety of payloads, DARPA program manager Scott Littlefield told reporters. (Littlefield stuck to sensors, but the possibility of arming ACTUV certainly exists).

So what’s crucial in the coming two-year test period is not any particular payload: It’s the autonomous artificial intelligence that directs the vessel’s operations overall.

DARPA has worked hard getting the robot boat compliant with international collision regulations, or COLREGs. It has multiple redundant radars and collision-avoidance algorithms to keep it from running into other vessels, Littlefield said. The program is developing software that can distinguish a sailboat from a motor vessel, a crucial distinction under COLREGs since wind-driven craft can’t maneuver out of the way as easily. It should even be possible for ACTUV’s algorithms to understand the meaning of different bells, whistles, and horns, as COLREGs require for vessels in fog. If another craft wants to talk to ACTUV, however, the robot’s not smart enough to converse: The radio call will be patched through via satellite to a distant human.

In fact, DARPA envisions constant human supervision for ACTUV. But it won’t be like a Predator drone, where a human constantly operates the unmanned system by remote control, Littlefield emphasized. Instead, the human will plan missions and issue general orders for the ACTUV to execute on its own, for example telling the vessel an area to sweep for enemy submarines.

During testing, a human will actually ride on Sea Hunter with a full set of controls just in case, said Littlefield, the same approach used on the experimental Google car. But the long-term plan is to put the human supervisor on shore or on a ship.

A major goal of testing will be working out how to operate ACTUV in coordination with vessels, both manned and unmanned. (The Army is working on similar “manned-unmanned teaming” between drones and manned helicopters). Such a combination of humans and robots in a single, seamless, synergistic force — sometimes called a “Centaur” approach — is central to Deputy Secretary Work’s vision of future warfare, the so-called Offset Strategy. We can’t match Russia or China for numbers, the reasoning goes, but if we support our relatively few human combatants with robots, we can offset their advantage and prevail.