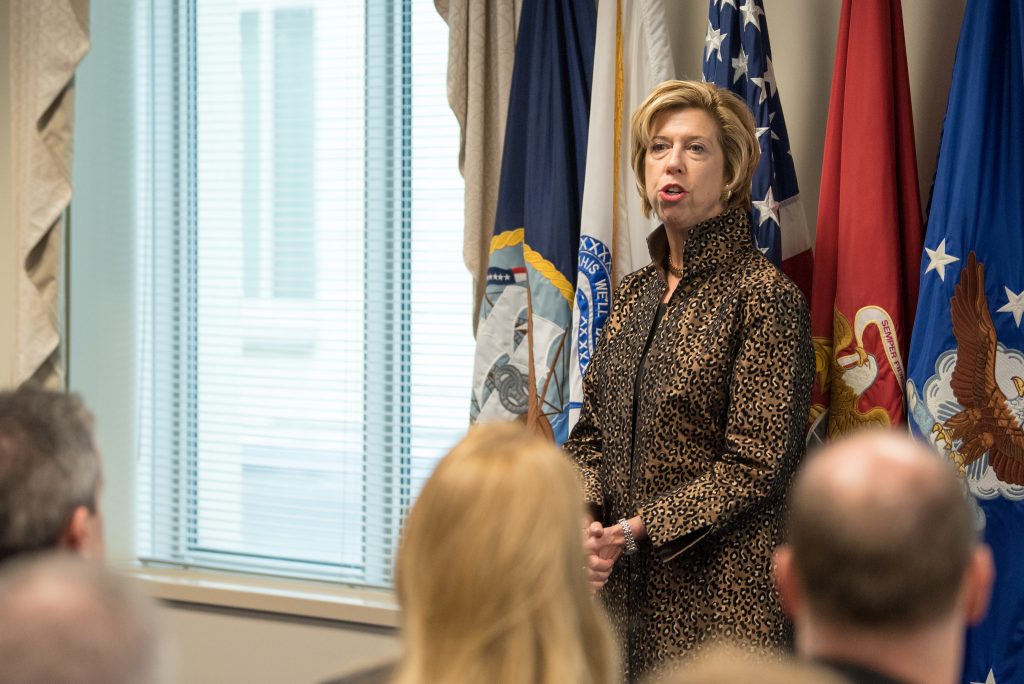 FARNBOROUGH AIR SHOW There was quite a bit of speculation over what happened to Ellen Lord, the Pentagon’s chief of acquisition and sustainment when she suddenly cancelled events at the world’s largest military and commercial air show here.

After Lord and Peter Navarro, President Trump’s chief trade advisor, pulled out of the show, questions were raised over the big planned international rollout of the Trump administration’s America First program to ramp up weapons sales worldwide.

But as it turns out, Lord was doing just that. But not in the U.K.

Instead of flying to London, Lord flew to Delhi to co-chair the U.S. Defense Technology and Trade Initiative with her Indian counterpart, the India secretary of defense for technology Ajay Kumar, said Lt. Col. Mike Andrews, a Pentagon spokesman. “She’ll also be meeting with American industry as well. This visit underscores the importance of continued security and trade collaboration between the United States and India,” Andrews told me.

Lord’s trip to India underscores the growing importance the country plays in U.S. policy making in the region. For much of the past decade, Washington has been trying to forge a closer bond with Indian leaders, while the U.S. military has increased the number of exercises it conducts with the Indian armed forces. And of course, the U.S. defense industry is looking to wean Delhi from its dependence on Russia for fighter jets, helicopters, ships, and missile defense systems.

The meeting may also help soothe some of the frustration Indian leaders have felt over the multiple postponements of the anticipated “two-plus-two” dialogue, which is now slated for November.

The dialogue is set to include defense minister Nirmala Sitharaman, Foreign Minister Sushma Swaraj and their American counterparts, James Mattis and Mike Pompeo. It was originally slated for April, but the abrupt firing of Rex Tillerson as Secretary of State and swearing in of Pompeo in late March contributed to the original delay. It was tentatively rescheduled for May or June, Indian leaders said, but preparation for the meeting between Donald Trump and Kim Jung Un consumed much of Pompeo’s effort.

The talks are expected to hit on issues like technology collaboration and military exercises, India’s continuing relationship with Moscow, and Chinese influence and expansion.

Both sides have been eager to expand collaboration, and India is known to be demanding a significant amount of work to be done in its own military plants.

The Indian Ministry of Defense said in a release that a joint working group looking at a surveillance aircraft “has made considerable progress,” and the Indian navy joint working group “is constructively engaged with US Navy for aircraft carrier technology cooperation for the ongoing program.  On the land systems front and on projects under the DRDO, both sides have identified projects where scope of co-production/co-development of systems exists.”

Tensions remain, however. Indian officials have bristled at a law passed by Congress last year that slaps penalties on countries doing business with Russian defense firms, and the government has said it will continue to buy Russia kit, including the S-400 air defense system.

“Our defense relation with Russia has endured several decades,” Sitharaman said earlier this week, adding it is “a US law and not a UN law.”

The debate in Washington over the Countering America’s Adversaries Through Sanctions Act (CAATSA), intensified this week after president Trump’s performance in the press conference with Russian President Vladimir Putin. Senate Minority Leader Chuck Schumer demanded the rejection of a measure in the 2019 NDAA that would allow the Trump administration to ease penalties against U.S. allies buying Russian weapons.

“Ratchet up sanctions on Russia, not water them down,” Schumer said in a floor speech Tuesday.

But objections to the bill have come from both Republican and Democratic lawmakers, concerned the sanctions would hurt U.S. allies like India, emerging friends like Vietnam and Indonesia, and some Eastern European countries who have old Russian gear in their inventories.

Defense Secretary James Mattis has also come out against the measure in April, asking for national security exemptions for such cases. The outcome of the legislation will be a key bellweather for his influence on the Hill.

The United States has emerged as India’s second biggest arms supplier in recent years — supplying the Indian military with 15 percent of its equipment — but Russia still accounts for 62 percent of the country’s military needs, while Israel comes in third place at 11 percent, according to SIPRI.

Some of the biggest deals still in the works include the S-400, four frigates, and the formation of a joint venture to manufacture Russian light utility helicopters in India.

A Reuters report Wednesday afternoon indicated that the United States was ready to sell India an unspecified number of Guardian drones for use patrolling the Indian Ocean, and for hunting down militants on land. It would mark the first foreign sale of an armed American drone. And India was also invited this week to take part in a counter-mine exercise along with the U.S. and Japanese navies for the first time. The annual 2JA mine-countermeasure exercise included four Indian Navy explosive ordnance disposal divers.