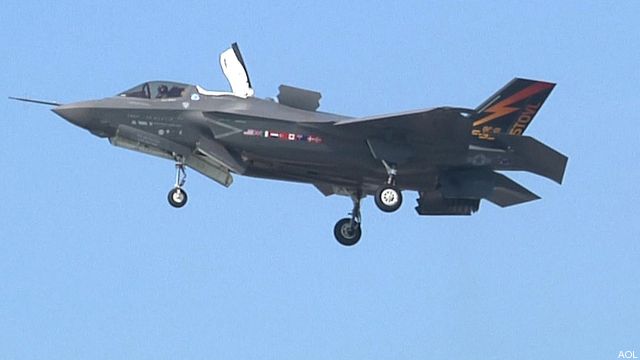 Washington: A bipartisan band of six senators — five of them members of the Senate Armed Services Committee — are questioning the Pentagon’s politically explosive $1 trillion cost estimate in an Aug. 1 letter to Ash Carter, the presumptive deputy secretary of defense.

The was made on the last page of the Pentagon latest Selected Acquisition Report for the F-35 program. SARs are generally considered authoritative cost estimates.

But the senators –five Republicans and one Democrat — say the April 15 SAR may “make overly conservative assumptions using cost factors and maintenance procedures from legacy aircraft systems rather than actual costs data.” That, they say, means it “may significantly overstate costs for the entire F-35 program.”

The senators go further, saying that the SAR, “may not be of sufficient quality and fidelity to enable Congress to make informed budget decisions.” In other words, you tell us it’s this bad but we don’t really believe you. And that implies they want a new estimate, though they don’t call for one in the letter.

In plain English, the senators believe that the Pentagon estimate may be way too high because it uses outmoded data. Lockheed Martin officials have said predictive maintenance software and the modular design of the aircraft should mean the plane is considerably cheaper to maintain than planes such as the much older F-16, in part because fewer people will be required to maintain it and fix problems.

The letter was signed by: John Cornyn, SASC member from Texas; Kay Bailey Hutchison, a Texas member who sits on both the Senate defense appropriations subcommittee and the SASC; Jeanne Shaheen, the lone Democrat who hails from New Hampshire and sits on the SASC; Republican Orrin Hatch of Utah; Kelly Ayotte, member of the SASC; and Saxby Chambliss of Georgia, who is ranking member on Senate Select Committee on Intelligence and a member of the SASC.

Cornyn and Hutchison, of course, hail from the state where Lockheed Martin assembles the F-35. The company has a substantial presence in Georgia.