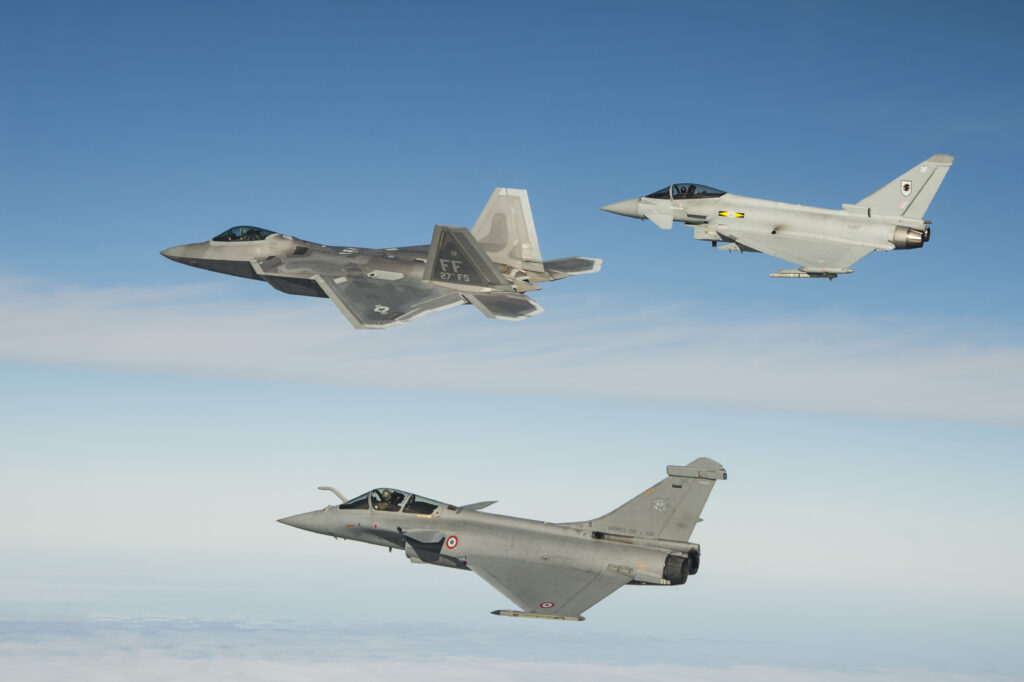 As former Air Force Chief of Staff “Buzz” Moseley once declared, “there is not a place on the face of the earth that the USAF will not fight their way into.” But this aspiration has been complicated by 15 years of fighting low-end opponents like the Taliban even as peer adversaries like China and Russia build up high-end anti-aircraft defenses. The result is dangerous atrophy in the technology and training required for US air (and naval) forces to project power offensively worldwide. Now, with Russian aircraft and air defenses firmly established at a new base in Syria — and clashing with NATO ally Turkey — the challenge of contested airspace is no longer a future possibility but a present reality.

It was this challenge that brought together the US Air Force, the Royal Air Force, and the French Armée de l’air in a recent trilateral wargame at Langley Air Force Base. The goals: recover lost skills, hone new ones, advance new concepts of operations, and shape a template for the 21st century transformation of each nation’s air combat force.

The close relationship between the real world and the exercise was highlighted in a remark made by US Air Force Chief of Staff Mark Welsh at the media day held during on the exercise on December 15, 2015, “Interoperability among allies and deconfliction in the operations of air forces in close proximity is crucial, “Gen. Welsh said. “We are using the same communications processes in the exercise that we are currently using in the Middle East to provide for interoperability and deconfliction.”

But the three air forces were looking to the future as well, shaping a template for 21st century operations within which fifth generation capabilities like the F-22 and F-35 can empower legacy aircraft to create a more lethal, survivable and effective force. Although the F-22 has flown with Typhoon in the past, this was the first time flying with the Rafale.

As the Air Combat Command chief, Gen. Hawk Carlisle, put it: “The whole is greater than the sum of the parts and we are working in this exercise in shaping a more effective force.” 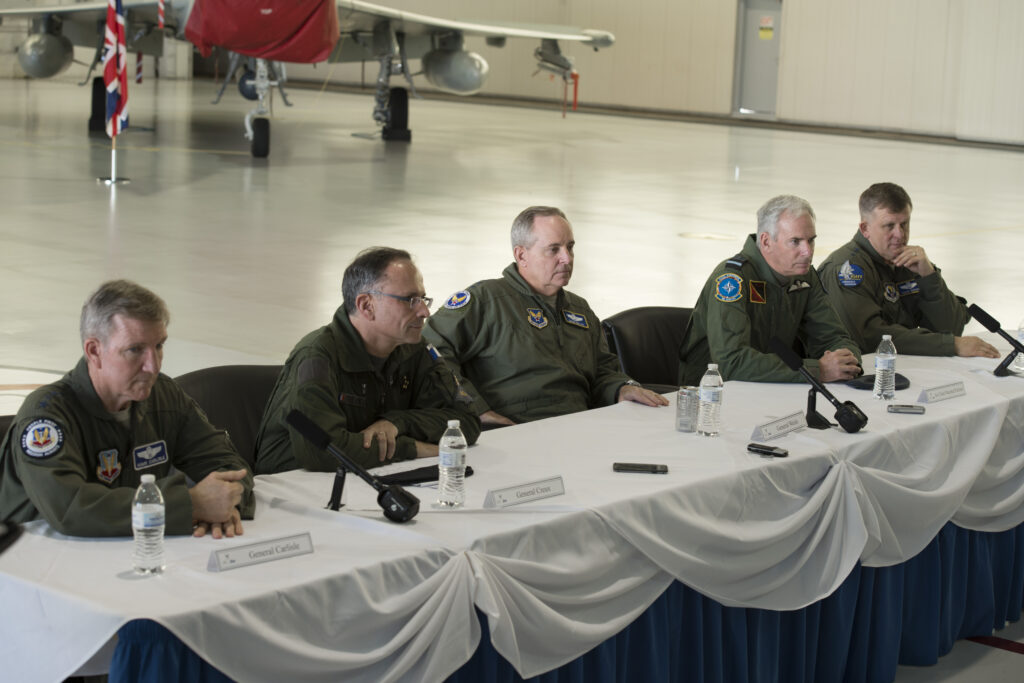 The changing threat environment was highlighted by the senior Air Force officers present at the media day event. Indeed, it was perhaps the only topic that drew comment from every one of the extraordinary array of leaders present: Welsh, Carlisle, US Air Forces Europe’s Lt. General Frank Gorenc, Royal Air Force chief Sir Andrew Pulford, and General Antoine Creux, Inspector General of the French Armed Forces.

“In this exercise in particular,” said Gen. Carlisle, “we are focused on enemy aircraft and their missiles, surface-to-air missiles, and electronic warfare as evolving adversarial threats.”

As counters to those threats, Carlisle continued, “we are focusing on link architecture and communications to pass information, the contributions the different avionics and sensor suites on the three aircraft can contribute to the fight, the ability to switch among missions, notably air-to-air and air-to-ground and how best to support the fight, for it is important to support the planes at the point of attack, not just show up.”

One key difference from the past is the role of the AWACs. If this exercise was held 12 years ago, the AWACS would have worked with the fighters in a hub-and-spoke system, with the AWACS acting as the central hub, pushing targeting and warning data out to the fighters . But fifth generation fighters like the F-22 and the coming F-35 have the sensor, data fusion, and communications capabilities to push out intelligence in their own right, so the centralized hub-and-spoke architecture becomes a decentralized many-to-many network. In contrast to old-school operations, the planes at the point of attack can provide a much more dynamic targeting capability against the adversary, with the intelligence they push back to the AWACS as important as the directions coming from the AWACS.

“The exercise was not about shaping a lowest common denominator coalition force but one able to fight more effectively at the higher end as a dominant air combat force,” Carlisle said. “The pilots learning to work together to execute evolving capabilities are crucial to mission success in contested air space.”

The important of human skill was especially highlighted by the head of the RAF. Sir Andrew Pulford noted that as the RAF added two additional Typhoon squadrons and an additional F-35 squadron, he was concerned to shape the right skill sets going forward into a world in which a benign environment for air operations would not be the norm. 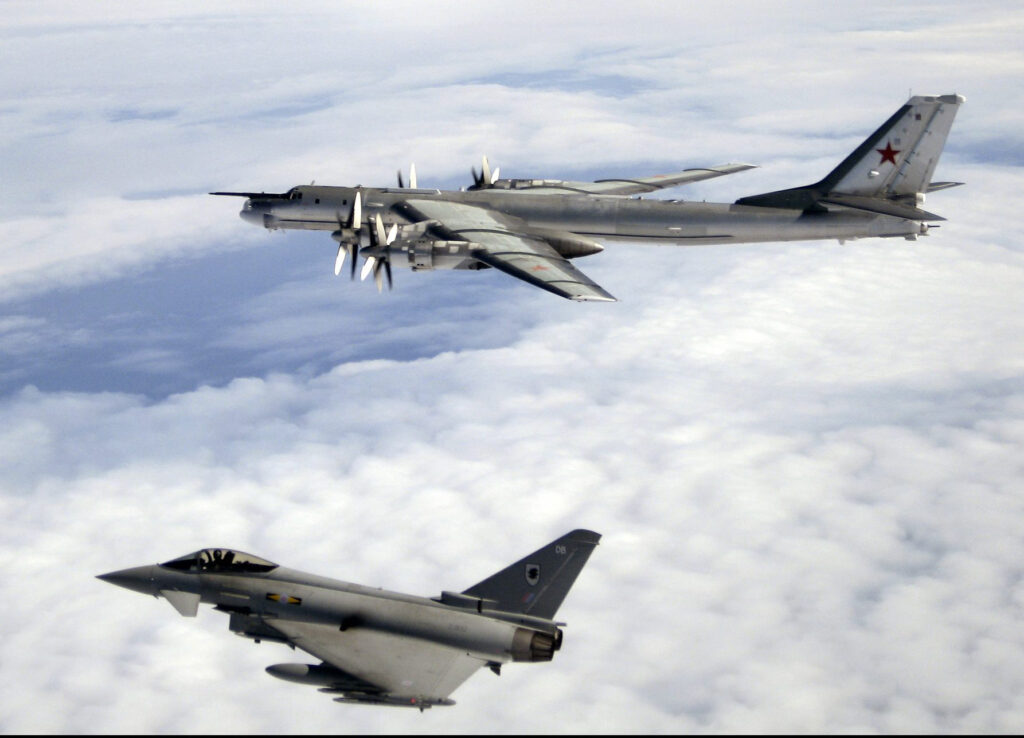 While not a fifth-generation aircraft, the Typhoon is a very lethal combat asset, which is leading the Royal Air Force attacks against ISIS in the Middle East with the Typhoon-Tornado tandem as a key part of the force package.

“The modernization of Typhoon is underway,” said Group Captain Paul Godfrey, the air boss of RAF Lossiemouth. “We have seen real progress in terms of electronic warfare, sensors and integration, and improvements in the human machine interface which is going to make the cockpit more effective to operate the aircraft in the expanded battlespace with 5th gen assets.”

One British pilot put it particularly well: “Whoever can gather, process and exploit the most information in the quickest time will win the information war and ultimately the fight. With fifth generation aircraft being able to instantly share data with their fourth generation cousins, the Typhoon can become and an even more effective and capable jet fighter.” 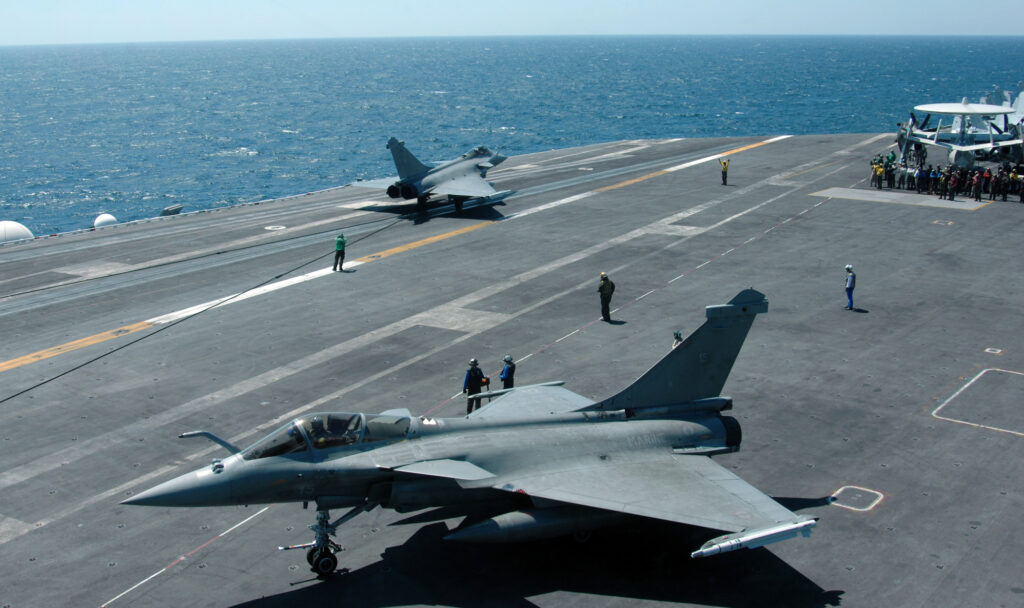 French Rafales aboard the USS Truman

The Rafale is the oldest of the three fighters in the core air combat air force in the exercise. The plane has seen significant combat experience in Africa and the Middle East and Afghanistan. It is the key enabler of the French force approach to joint and expeditionary operations, and over time the combat systems on the aircraft have seen significant modernization. Fifteen years have passed since the first Rafale entered in service in the French Navy.

“We started very small with a fleet of only ten aircraft up until 2004,” recalls Marie-Astrid Vernier in a June 2014 interview, when she was director of military support at Dassault Aviation, having worked on the Rafale since 1994. The current French Rafale fleet has been built with the delivery of four different “tranches” of aircraft, which have been upgraded over the years into various standards, the latest one being the Standard F3R to be delivered in 2018.

Today’s Rafale F3 has little to do with the very first F1. “Retrofitting the very first planes from a F1 standard to a F3 standard takes far more time than upgrading later-built planes,” explains Capitaine de Vaisseau Sébastien Fabre, formerly in charge of the support of the Rafale fleet within the French Ministry of Defense. As the thousandth modification was achieved last year, Fabre stressed in an interview that “60 percent of these changes relate to standard and technical tracking, while the rest has to do with improving equipment and support tools.” 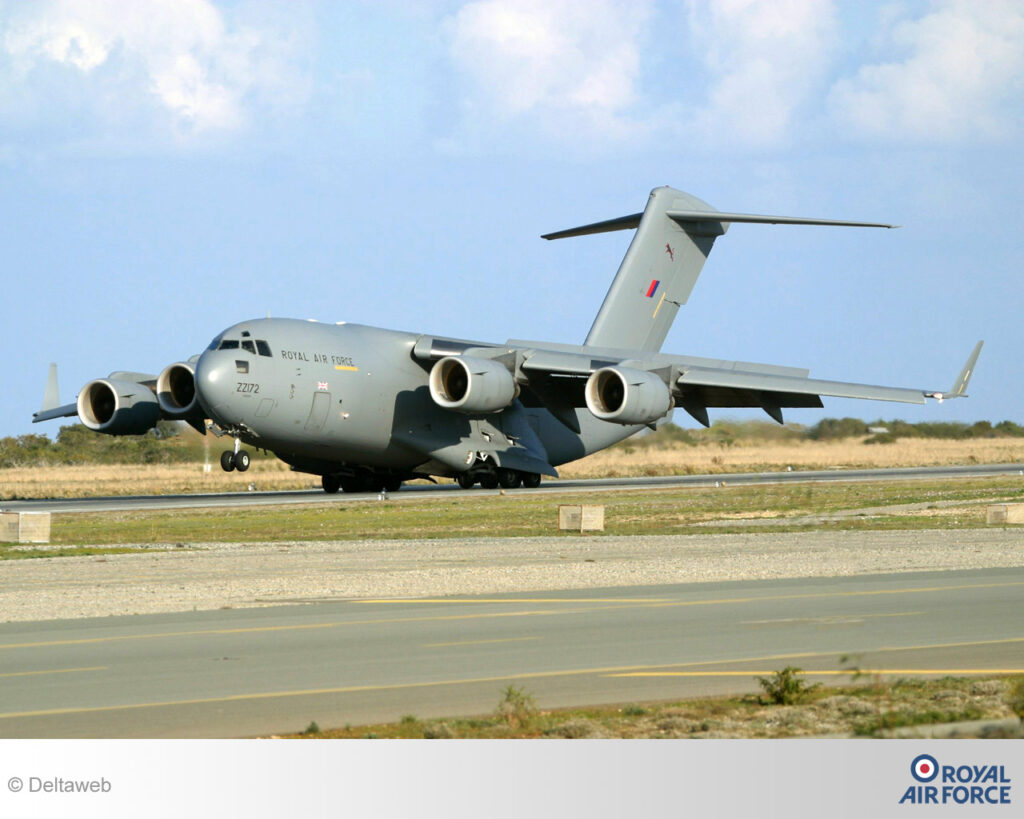 For the British and the French to come to Langley to work with the US Air Force was itself an exercise in expeditionary airpower. The mere ability to cross the Atlantic and train together is already an achievement on its own.

Preparing the support of such a large-scale exercise is something both the RAF and the French Air Force are accustomed to thanks to exercises regularly hosted by the USAF, such as Red Flag. What was different this time was the way it was done in a joint manner between the two European air forces. All French personnel (about 110) –- besides the aircrew of the fighters and KC-135 tankers themselves –- were flown first from France to the UK on French transports, but then were taken onboard British C-17 and KC-30A Voyager (the British version of the A330 MRTT).

Perhaps the best capstone comment on the exercise was provided by the head of the RAF. “The important thing is our three air forces can operate together as one,” said Sir Andrew Pulford. “The three air forces are demonstrating that we can and always have worked well together, that we still can and still do, and it doesn’t matter whether we are operating over Iraq or Syria, or exercising here on the east coast of the U.S., these are three air forces operating as one team and for the common good.”