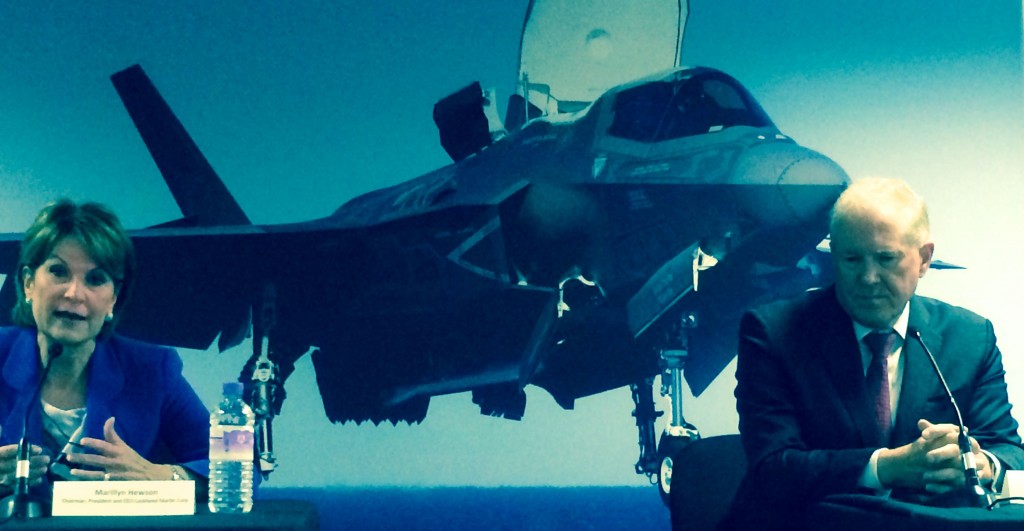 FARNBOROUGH AIR SHOW:  Frank Kendall, the head Pentagon buyer, appeared here today on a high-powered panel of senior Pentagon civilians and industry leaders, and averred that the F-35A fire last month does not pose a systemic risk to the program.

Air Force Lt. Gen. Chris Bogdan, head of the F-35 program, told a packed room of journalists at the media center here that all 98 Pratt & Whitney F135 engines in production or already installed on F-35s have been inspected, and none of them showed the same sort of damage to turbine blades as occurred in the damaged Air Force F-35A that caught fire June 23 at Eglin Air Force Base.

This morning’s event — supposed to help materially boost the F-35’s image and visibility — instead served mostly to highlight the fleet’s grounding and the plane’s absence, so far, from the show. For the first time, F-35 maker Lockheed Martin has test pilots here on call for the media and a small stand set up at the media center to take questions and provide a focus for the program separate from the company’s other ventures highlighted here.

“We are all disappointed,” Bogdan said at one point. “It would have been a wonderful thing for everyone to see that this is a not a paper airplane.”

But Kendall and Bogdan’s remarks made it pretty clear that the impact on flight testing should be “minimal,” and that the plane’s costs should continue to drop substantially. Considering the fire resulted in missing  the HMS Queen Elizabeth christening, the Royal International Air Tattoo, and the first two days of Farnborough, some might argue it was a remarkably sanguine view of the program. But if you strip away the optics of the plane not flying when it was touted to, the fire appears to have had relatively little effect on the program beyond the fact that the planes were not flying, thus delaying some flight testing and making a great number of people either nervous or suspicious.

The other aspect of the program that will be affected is to do with communications among the services and the international program partners and allies who are buying the plane. As Breaking Defense readers knew from the start, the perfectly correct actions of Air Education and Training Command in placing the plane under armed guard and protecting details of the accident made it extremely difficult for the Joint Program Office, the rest of the Air Force, the Navy and the Marines to know what had happened and how the investigations was proceeding.

I asked Bogdan whether the partners had complained about the communications and whether they were making significant changes to the program to handle subsequent incidents with more aplomb.

“Yes. We are going to formalize the process for mishap and safety reporting across all services and the partners,” he replied.

Sean Stackley, the head of Navy acquisition, noted that this was “a unique incident” and one that generated “lots of lessons learned.”

Bogdan also clarified that the Safety Investigation Board analysis of the accident does not need to be completed before the F-35s are cleared to fly, once NAVAIR lifts the grounding order, known as a red stripe. Meanwhile, pilots for the four Marine Corps F-35Bs remain on 24-hour alert at Patuxent River Naval Air Station, ready to dash to their planes once cleared to fly.

They won’t get here at the earliest until Wednesday.

Tidbit of the day: Aaron Mehta of Defense News asked the august panel about a Facebook post on the official Pax River site saying the planes would leave Tuesday morning. Bogdan replied that he didn’t know Facebook pages were now places where official statements are made, much to the merriment of the panel. Of course they were all pretty much wrong. Facebook pages are used for official pronouncements by all sort s of organizations these days, as is twitter. But the panel’s reaction says more about the organizations for which they work than it does anything else.