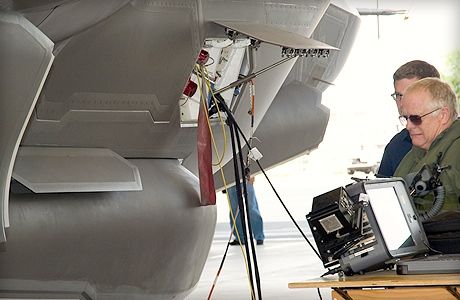 NEWSEUM: The key maintenance software program for the F-35, called ALIS, is “way behind,” Lt. Gen. Christopher Bogdan, head of the program, said today. How far behind? “We are way behind. We are way behind.”

Bogdan told a conference hosted by Credit Suisse and organized by Jim McAleese here that he “could spend hours talking about what’s right and what’s wrong with ALIS,” the Autonomic Logistics Information System. But he kept it pretty short. Program leaders realized the system, designed to monitor the aircraft’s systems and maintenance needs, was a hell of a lot more important and complex than they had originally foreseen. “It is way more important and way more complicated than that,” Bogdan said, adding that it needs to be treated “like its own weapon system.”

While the program is “in catch-up mode with ALIS,” Bogdan said they were beginning to see improvements in the system. The latest software update was done at Eglin Air Force Base this weekend. “Normally with ALIS we would take one step forward and two steps back. This time we actually took a step forward and didn’t take a step back. That is encouraging, that because of the way we are changing the development of ALIS we starting to see results. But we are way behind. We are way behind.”

Lockheed Martin defended the program, while acknowledging the problems. “We recognize ALIS has had challenges and we are working with our Joint Program Office and field users to address them,” spokesman Mike Rein said in an email. “An ALIS software update is currently undergoing installation across F-35 bases for increased processing speed. We are incorporating user feedback to further advance the system and intend to field the next major release of ALIS in first quarter of 2015 to provide additional capability. ALIS is maturing in parallel with the aircraft and our team is committed to delivering the most advanced and capable fleet management system with ALIS.”

On the cracked bulkheads found during ground lifecycle testing of the F-35Bs — the Marine aircraft –Bogdan said “his biggest worry” about them is that there are planes on the production line due to receive the bulkhead models that cracked. He said he has “challenged Lockheed to figure out a way to get that fix done as quickly as possible” so he doesn’t have to buy jets and fix them later on.

The other area — related to ALIS — is that the F-35s produced so far are not meeting readiness standards.  “Parts are failing more often then we expected and when they fail they take longer to repair and maintainability on the airplane is just taking too long to repair,” Bogdan said. “The good news is we have the wherewithal and the capability to conquer all those problems with the money we have been given.”

All this doubtless has given rise to many acquisition lessons learned. Bogdan, former program manager of the KC-X airborne tanker program, noted he had compiled a pamphlet about the lessons he learned there. “We are probably going to end up doing the same for F-35,” he said. “Instead of a pamphlet we may need an encylopedia because of all the things we didn’t get right.”

Some more hopeful news for Lockheed and the program: Bogdan said he was pretty sure South Korea would buy F-35s. He was less categoric about Singapore, but he clearly thinks it’s likely the city-state will buy the aircraft. Breaking Defense readers already knew that, of course.