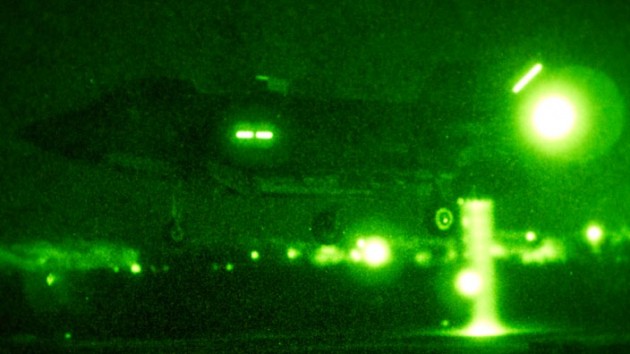 PENTAGON: During the 10 days of testing aboard the USS Wasp, the Marines will fly the F-35B carrying air-to-air and air-to-ground weapons to mimic combat conditions. But they won’t be blowing anything up because they will carry inert warheads. The Marines also will be exploring how they can expand the “vertical envelope” around the ship for STOVL operations, says Marine Lt. Gen. Robert Schmidle, deputy commandant for aviation.

The testing, known as DT-2 (Development Testing 2), is a crucial step toward Initial Operational Capability (IOC) for the Marines, whose Joint Strike Fighter variant has the earliest IOC date of the three services — 2015.

That means the planes will take off and land in about double the area as the initial flight testing on the Wasp explored.

This is of a piece with new concepts of operation the Marines are exploring to use the F-35Bs for three different types of missions. Probably the standard configuration on board what are effectively Marine aircraft carriers but are called amphibious assault ships would comprise a mix of V-22s, CH-53s, AH-1Z Cobras and six F-35Bs. The second mission set, designed to deliver strike aircraft with the greatest range possible would pair 16 F-35Bs with six V-22 Ospreys equipped for drogue refueling, Schmidle says. The Marines have just finished the first V-22 refueling tests.

The third mission set would be more focused on sortie generation, getting as many strike aircraft into the air as often as possible. That would simply include 20 F-35Bs. If the Marines were flying that many aircraft off and around a ship like the Wasp, they would need the broadest operational flexibility, hence the tests to expand the landing and takeoff envelopes.

The Marines are also refining and executing the first night takeoffs and landings from the USS Wasp, as you can see from the video above.

Back of much of this planning is the Marines’ commitment to AirSea Battle’s principal task — operating in anti-access, area denial scenarios. Think China.