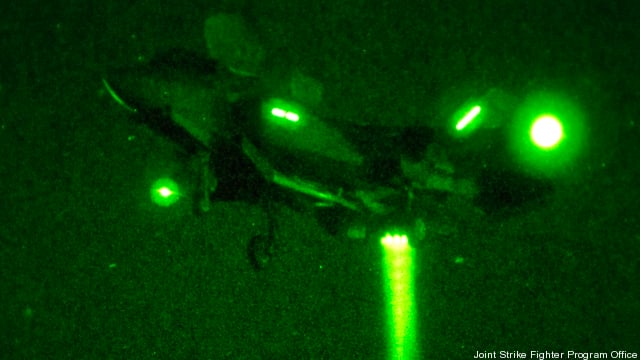 For the valedictory wargame of the Marine Corps’s Infantry Officer Course, young second lieutenants launched an airborne raid on San Clemente Island off the California coast to try out new tactics and techniques with V-22s and F-35s. Their mission: fly in on V-22 Ospreys, wipe out simulated missile launch sites so US warships could move in, then march 14 miles overnight to seize a forward airfield for Marine Corps F-35B fighters. Their air support: not actual F-35s — the controversial stealth jet is still not fully operational — but a “CATBird” test aircraft, a modified airliner carrying all the real fighter’s sensors. Their ultimate weapon: Samsung tablets.

Frustrated with their standard-issue communications gear, the young Marines had improvised a wireless network using commercial devices. Marines on foot and Marines in the back of fast-flying V-22s could exchange intelligence, rewrite plans, and receive reconnaissance data from the simulated F-35. When ground units couldn’t transmit directly to each other because of terrain blocking the signal, they relayed the message via a V-22 flying overhead. When their backpackable 40-pound Wasp drones couldn’t send surveillance footage to the tablets, the Marines just took digital photos of the Wasp control screen and sent them to each other.

The raid on San Clemente was just one in a series of tactical and technological experiments being conducted by the Infantry Officer Course. This coming September, IOC plans to do another exercise in Yuma, Ariz. incorporating actual F-35s — flown by the same Marine Corps squadron tasked to bring the jet to its “initial operational capability” next year.

After spending 18 years and $80 billion to develop the F-35 fighter, the US military now has to figure out how to use it in real-world operations. At the cutting edge of this effort are not generals, admirals, or defense industry experts, but a small group of young Marines. The most senior is a few years shy of 40, and the majority are recently commissioned second lieutenants in their early 20s. It’s a perfect example of how small-scale, bottom-up innovation — with some timely assistance from the top — just might save the world’s biggest military bureaucracy from itself.

Battlefield WiFi is the key to getting the most out of the F-35’s sophisticated sensors — indeed, to the future force as a whole — and that’s an arena in which a generation raised on iPhones has an advantage. So last year, when the Iraq and Afghanistan veteran who’s now the Infantry Officer Corps director, Maj. Scott Cuomo, ran into technical troubles with his first experiments networking ground and air forces together, he handed the problem to his students.

Cuomo and company have done most of their work so far with the V-22 Osprey, pioneering both technologies and tactics. “Ten years ago,” bragged Lt. Gen. Robert Schmidle, “the pundits said you can’t fast-rope out of a V-22, there’s too much downwash. These lieutenants didn’t know it, so they did it.” Cuomo was in fact the third man out of the first aircraft, preceded by two 220-pound Marines using their bulk to anchor the line against the blast from the V-22’s rotors.

It was that early 2013 exercise that brought the young Marines to the attention of Schmidle, at that time the Marine Corps’ deputy commandant for aviation, and the three-star general promised a very surprised Maj. Cuomo to get him whatever he needed for future experiments. That’s how they got a mock F-35 to plug into their battle network for the March raid on San Clemente Island.

Networking ground troops with F-35s is a big deal, and not just for Marines. The Air Force and Navy are also buying the fighters, a planned 2,443 across all three services, and one of F-35’s missions — replacing the vaunted but aging A-10 Warthog — will be to strike targets just ahead of Marines and Army soldiers on the ground. If the fast-moving, high-flying F-35 is supposed to provide the same precise firepower as the low-and-slow A-10, let alone reams of reconnaissance data, it needs a direct connection to the foot troops calling for close air support. And while the Army and Air Force are working together much less dysfunctionally than ever before, the Marines are still the only service that has both foot troops and fighter jets. That puts them in prime position to thrash out how F-35s and infantry can work together.

“Everything in the Marine Corps has to go down to the ground maneuver commanders….That’s the whole reason marine aviation exists to begin with,” Schmidle told the Association of the US Navy recently. “I’d like to link everything together from our F-35s to the V-22s to all of our helicopters” and down to ground forces.

That’s the mission where Cuomo and his young Marines have taken point. So how are they doing it? 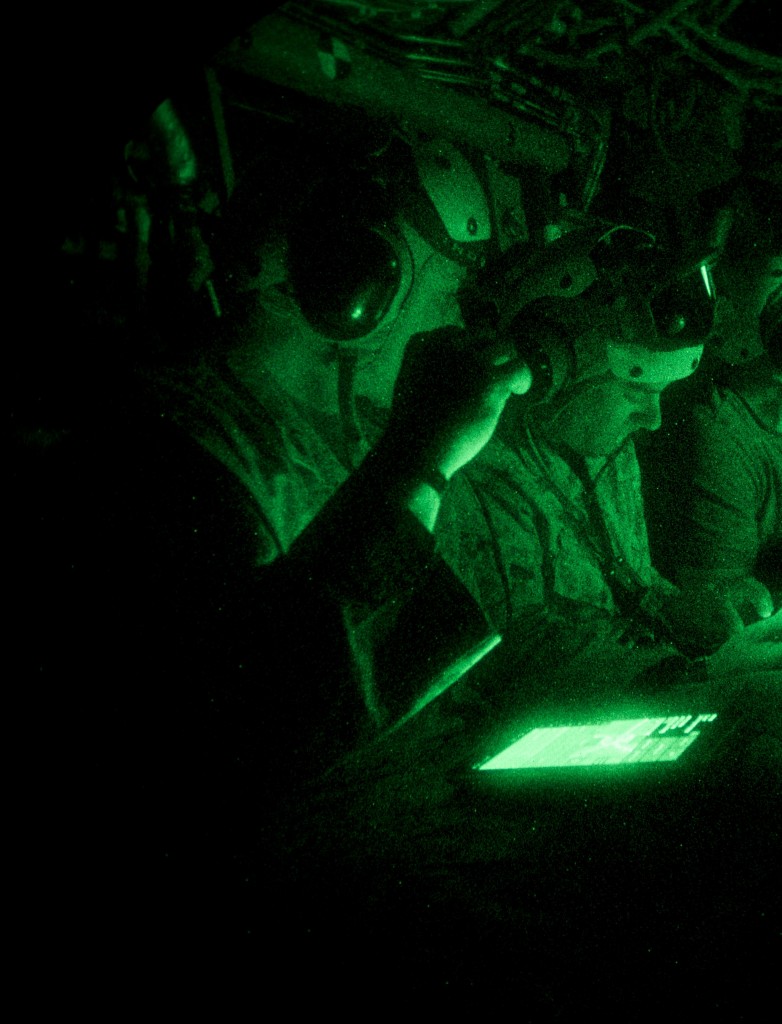 Infantry Officer Course Marines use Samsung tablets to coordinate operations from the back of a V-22.

From Flying Blind To Real-Time Intel

Maj. Cuomo has led the Infantry Officer Course in four major airborne experiments since March 2013. In that time the Marines have progressed from flying almost blind to sharing data among ground troops, V-22s, drones, and the mock F-35, with real F-35s intended to join in this September.

In March 2013, the IOC Marines staged their first V-22 raid, flying from Quantico to Parris Island. Cuomo found the aircraft’s speed and range impressive – but it outstripped the Marines’ command-and-control capabilities. “While flying, we couldn’t communicate at all,” Cuomo said. “You take off with a certain set of information, you land with the same information.”

That meant the Marines’ intelligence was two hours out of date when they landed. Even after landing, they had to lug around 43 pounds of unreliable communications gear to share data — intermittently — with higher headquarters. Meanwhile, the “enemy” forces had a system they could fit, literally, in the palms of their hands. “We basically gave them iPhones and said, ‘have at it,'” Cuomo recalled. “They ran circles around us.”

Long-range aircraft without long-range communications aren’t much use. In Iraq and Afghanistan, Cuomo had fought with “reinforcements three minutes away,” he told me. But the Marines don’t plan to fight that way in the future. To the contrary, increasing threats from long-range anti-ship cruise missiles (ASCMs) will keep Navy ships further out to sea, which meant Marines will have to fly further just to reach the shoreline: in the worst case, 300 to 400 miles.

Cuomo had planned V-22 raids over such distances while off the shore of Libya with the USS Bataan amphibious ready group in 2011, but never executed them. “I was a little disappointed,” he said. “I don’t think we had employed the V-22 to the maximum extent possible.” The desire to explore those capabilities led his experiments at the Infantry Officer Course.

So after a second mock raid flying from Quantico to Florida in August 2013 — intended to test the V-22 in tropical conditions — Cuomo got Lt. Gen. Schmidle’s support for a much more ambitious exercise. “He was like, ‘You want to go over 1,000 miles, at night, and, fast rope into an urban area to simulate rescuing an ambassador?'”

In December, 2013, the thousand-mile raid took off from the Marine training center at 29 Palms, Calif. and flew four hours to Fort Hood, Texas. “We learned a ton,” Cuomo said. In stark contrast to the earlier exercises, “we were able to communicate from aircraft to aircraft, to include sending pictures back and forth,” exchanging intelligence updates, and rewriting the attack plan in flight. They even received imagery from a Harrier jet sent ahead to reconnoiter the target area. In the future, that role would be played by the F-35.

After the December raid — and another talk with Lt. Gen. Schmidle — came the March 2014 raid on San Clemente Island, using the mock F-35. The next exercise will occur in 29 Palms this June. It’ll be similar to the San Clemente raid, he said, except “it’s all live-fire at night.” Marines will fast-rope out of hovering V-22s, destroy simulated anti-ship missile batteries in both open and urban terrain, get resupplied by a GPS-guided high-altitude airdrop — the scenario assumes too high an anti-aircraft threat to come in low once surprise is lost — and then march 10 miles through “enemy” forces to seize an airfield. 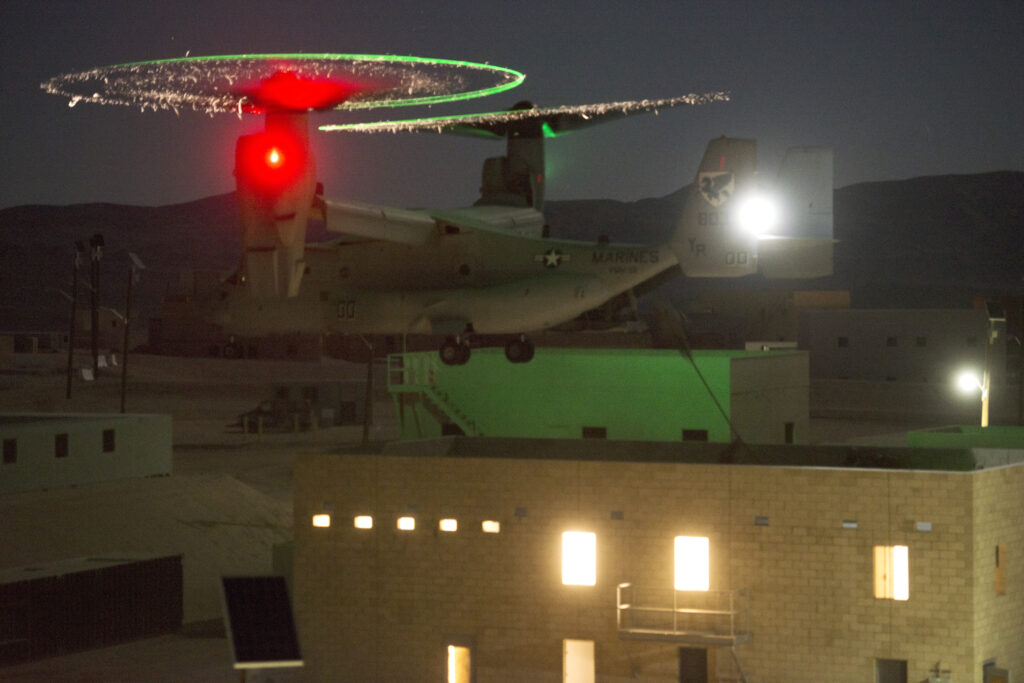 The kind of mission Cuomo and his young officers are practicing — deep raids to destroy missile launchers and capture airfields — is central to the Marine Corps’s evolving concept of future operations.

“We’ve been looking at a concept known as ‘distributed STOVL operations,‘” Lt. Gen. Schmidle told the Association of the US Navy. STOVL refers to “short take-off, vertical landing,” a rare and costly capability for jet aircraft but something the Marines insisted on for their version of the F-35. In addition to launching fighters from aircraft carriers, big-deck amphibious ships, and fixed airbases, the Marines want to exploit STOVL to disperse handfuls of fighters to ad hoc airstrips. A typical detachment, Schmidle said, would be 2-4 F-35Bs accompanied by two V-22s carrying ground crew, supplies, and fuel — in fact, the Marines are working on a “tanker” kit for the V-22 to enable it to refuel F-35Bs in flight — and would operate from an austere airfield for 24-48 hours before returning to the ship.

In a combat zone, of course, someone has to protect these forward airbases — and, in many cases, to capture them in the first place. That’s what Cuomo and his Marines are working out how to do. Historically, Marines deploy in smaller forces than does the Army, but the standard Marine Expeditionary Unit (MEU) still has a battalion of ground troops, commanded by a lieutenant colonel. By contrast, the new Marine Corps concept called Expeditionary Force 21 talks about long-distance operations by individual companies of 100-200 Marines, commanded by captains. That’s an extraordinary amount of responsibility for young officers — men just a few years older than Cuomo’s newly commissioned students.

“When you launch that force 200 to 300 miles deep,” he told me, “it doesn’t have much support. That force needs to be incredibly capable.”

“Some have gotten excited about the technology,” Cuomo said, “which I understand, because it’s great and it’s going to enable us to do all sorts of things.” But the most important thing, he told me, is the human beings using the technology. “The advanced technological assets, while great…are making the moral, mental, and physical demands on the Marine infantry greater than they’ve ever been.”

So innovation and initiative by young Marines aren’t just important to the experiments at the Infantry Officer Course. Increasingly, they’re crucial on the battlefield as well.