Posted by Murielle Delaporte on February 9, 2018 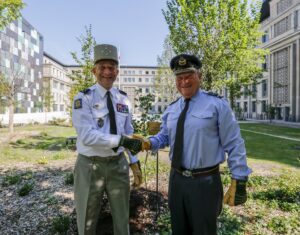 Britain’s decision to leave the European Union could be compared to France’s departure from NATO in 1966. Paris left the integrated military command structure “but not the Atlantic Alliance” just as London intends to leave the EU “but not Europe.”

But in defense terms virtually nothing is changing about how Britain works with France, with NATO or the European Union.

In the past eighteen months, British authorities have repeatedly gone out of their way to stress that the UK still belongs to the European continent and remains fully committed to its defense.

It’s this separation between national security and foreign relations that many observers have missed. Many of them are however worried that with the process of divorce currently underway between the UK and the EU, bitterness and tensions – as well as the potential cost and time involved (1) – could drive the British isles more inward and away from Brussels: a risk, which could lead to a decoupling that only Moscow would value.

Many signs are pointing in that direction as the exit conditions are not being negotiated very smoothly on either side.  Just to name a few : Great Britain is in the midst of domestic quarrels affecting Theresa May’s ability to manoeuver. France is at the forefront of a battle for the revival of a more autonomous Europe under the aegis of its newish president, Emmanuel Macron.

But like in any divorce, the hope is to preserve intact the fruits of the union past, and, in the case of the subject of this article, there are many such fruits. The Lancaster House Treaties are one of the children born from the Anglo-French honeymoon of the early 2010’s. Concluded between Prime Minister Cameron and French President Sarkozy in after the French decision to rejoin NATO.

A year later, the intervention in Libya was a live test of the determination and ability of an Anglo-French led joint air operation with President Obama’s America, then “leading from behind.” From a strictly military perspective and the standpoint of the Anglo-French military relations, it is a landmark in the conduct of joint air operations within a coalition.

As a matter of fact, and contrary to past attempts to formally align Anglo-French military relations within an ambitious political European defense concept, the Lancaster deal focused more on a joint realignment of future capabilities and seems likely to outlast any political turmoil such as Brexit. Why? 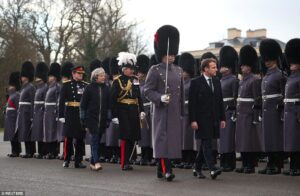 Inspecting troops before the UK-France Summit © Reuters, as published by the Daily Mail

So, not too long ago, i.e. on January 19th, 2018, when President Macron was hosted by Prime Minister May at the Sandhurst Military Academy for the 35th Anglo-French Summit, one could only be mesmerized by the survivability of both countries’ commitment to a shared calling to go against the common threats they have been facing alongside the same trenches for more than a century. In spite of an old history of tumultuous rivalries and suspicion, the “best enemies”, as they are sometimes called, have in actual fact always been on the same wave length when deciding to choose their battles, except on two recent occasions: the 2003 intervention in Iraq (against which the Chirac government strongly stood) and, ten years later, the intent to go to war against Syria (when the British Parliament got cold feet) …

There has indeed been a remarkable continuity when François Hollande took over from Nicolas Sarkozy, leading to an unprecedented growth in bilateral military cooperation whether at sea, on land, in the air, but also as far as logistics and support go (for instance as A400M endusers). And, in spite of Brexit, the same continuity has so far just been reaffirmed by Emmanuel Macron and Theresa May. 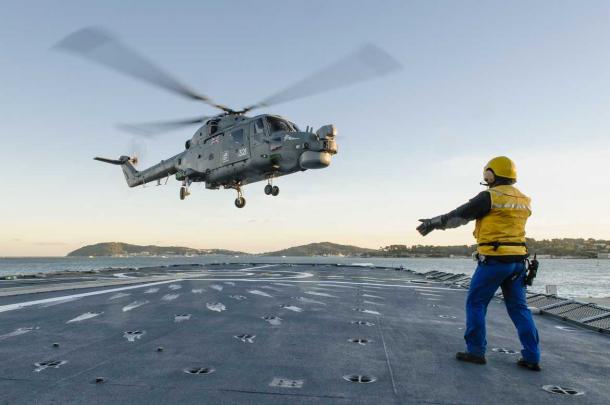 When reading the detail of each government’s communique and speeches concluding the 35th Summit, what differs mostly is the order of priorities: whereas London first emphasizes the French reinforcement to the UK-led enhanced Forward Presence battlegroup in Estonia in 2019 (a NATO commitment to contain Russian revival in the area), Paris focuses primarily on the migration challenge in Calais (a security concern affecting France and Europe as a whole).

But, for both countries, the second priority listed is the pursuit of the fight against Islamic terrorism in Sahel. And that is the major change since 2010. This evolution stems of course from the fact that both France and the UK face in their guts the bloody spectrum of an enemy that knows no border. With the summit indeed came a major announcement: the British are going to support the French military effort in that region (referred to as Operation Barkhane) by deploying three Chinook helicopters and fifty plus support personnel.

However, beyond the symbolic advertisement of such a move, one should underline the fact that the British have always been very supportive from the very beginning in various ways, such as logistics support with the C17. There is also a close natural cooperation between the former colonial rivals around the Chad Lake in the fight against Boko Haram, the French in Niger and Chad, the British in Nigeria.

To honor his British counterpart and as a gesture aimed at fomenting a common cultural legacy, President Macron has proposed to loan to Great Britain the famous tapestry of Bayeux, which portrays the conquest of England by William the Conqueror. Even though at first, one may interpret such a gesture as odd given the fact that Hastings was a major defeat for the English, one should not forget that by conquering England, the Duke of Normandy, although still technically a vassal to the King of France, had by that move become its equal as the head of the Anglo-Norman kingdom.

Eleven centuries later, Brexit is redefining, if not resurrecting, the old “pulling and pushing” traditional game of balance of power with Washington and NATO on the one hand, Berlin and the EU on the other. Let us hope that the “pooling and sharing” enabled by the Lancaster agreements in very concrete ways will prevail in the long run to preserve a much needed stability in the rocky times we are contemplating.