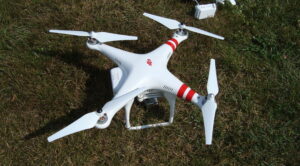 One of today’s toughest defense problems is drones. But not what the Air Force likes to call Remotely Piloted Aircraft that carry missiles and bombs. The bigger threat – one that worries law enforcement and the Secret Service as much as the Pentagon – is drones like the hundreds of thousands Santa brought to kids of all ages last month. Say a DJI Phantom 3 Standard Quadcopter Drone with 2.7K HD Video Camera, selling on Amazon these days for around $500.

ISIL is said to have used mini drones to case targets for suicide bombers. Drunks and protestors have landed mini drones everywhere from the White House lawn to the Japanese prime minister’s residence. Airline pilots have reported hundreds of sightings of drones dangerously close to their planes during takeoffs and landings. The threat is ever-growing. Williams said his company has a solution.

In April, at a joint U.S.-British exercise at a so-far unidentified United Kingdom location, Selex plans to demonstrate Falcon Shield, a counter-drone system designed to not only detect, identify, track, target and shoot down hostile or suspicious mini drones but – and this is the unique part — wrest control of them from their operators and divert them so they can be landed safely. In urban environments, that might be a lot better than shooting them down and risking injury to innocent bystanders or property damage.

“It’s a very difficult problem,” Williams said. “What you trigger may be as bad as what the terrorist intended.”

The problem is also difficult because, as U.S. military experts have determined in a decade-and-a-half of Black Dart exercises: “There is no silver bullet,” no single solution for this problem, according to Williams. “It needs to be a system of systems approach, and those systems need to be integrated in a manner that puts the user at the center.”

Finmeccanica has put together a modular and scalable system so that it can deliver what somebody might need in Times Square New York for VIP protection all the way up to providing a system, Williams said, that can protect an airport “or a very large critical infrastructure site such as a nuclear power plant or a military forward deployed operating base.”

A full-up Falcon Shield system would combine radar, infrared and daylight cameras, microphones to detect the buzz a mini drone’s rotors make, and devices able to detect a drone’s radio signals and track them back to its operator. The system will also include an electronic attack element to allow the Falcon Shield operator to take control of an incoming drone and kill or capture it, as in the video above.

That electronic attack ability, Williams added, “can defeat the systems in very cluttered environments such as urban environments without having an adverse effect on blue light systems that are out there, such as the police, fire services, ambulances.”

Assuming it works, of course. “The find, fix, track and identify is real right now and has been used and can be bought off the shelf as Falcon Shield,” Williams said. “The elements that we’re further developing or have developed and are integrating right now for April are the electronic surveillance and electronic attack elements.”