While it didn’t take off from a pitching and rolling carrier deck, the F-35C flown today by Navy test pilot Lt. Christopher Tabert did undergo most of the stresses and strains associated with a carrier launch when a steam catapult launched it into the sky today for the first time.


For more news and information on the swiftly-changing defense industry, please sign up for the Breaking Defense newsletter. You can also catch us on Twitter @BreakingDefense.
OK, the Lockheed-built plane launched from a naval air station at Lakehurst, N.J., but a catapult launch is a catapult launch. While the Navy has not had a chance to analyze all the test data gathered today, it did not report any basic problems with the aircraft.

“Our first trip here to Lakehurst went very smoothly because of the true collaboration and hard work from the integrated team,” Tom Briggs, government air vehicle engineering manager said in an official Navy news story. “We look forward to another productive visit and staying on track for initial ship trials.”

The plane will also be stressed over the next few weeks by launching it at varying power levels to check how its engines deal with sucking up steam generated by the catapults. The Navy hopes to fly an F-35C, the Navy variant, from a carrier in 2013. The Marines version, the F-35B, plans to practice sea-based landings this fall. 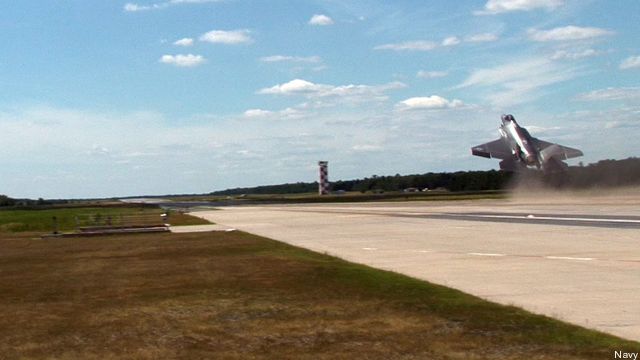