It’s one small part for an aircraft engine, one giant leap for 3D printing. The Navy has announced a Marine MV-22 made the sea services’ first successful flight with a “flight critical” component built by additive manufacturing.

Specifically, in the test at Patuxent River Naval Air Station, the Osprey’s engine nacelle contained a 3D printed titanium link, small enough to hold in one hand, that helps hold the engine onto the wing. (There are four links per engine; only one was 3D printed in this test). So this wasn’t the usual low-risk, low-hanging fruit for additive manufacturing: a plastic bracket to hang things from, a disposable syringe, a mock-up or model — the kind of things produced by the first 3D printer installed on a Navy warship. Instead, it was something so essential that if it broke, the engine might start coming off. 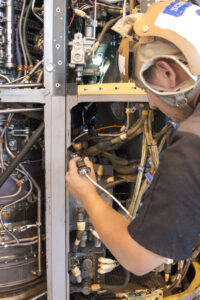 A mechanic installs a 3D printed titanium link that helps secure the engine of an MV-22 Osprey to the wing.

Making such flight-critical components has been a huge hurdle for 3D printing for reasons both technical and institutional. Additive manufacturing builds up components one droplet of material at a time, layer atop of layer. Traditional manufacturing casts things as a single piece, then cuts them down to the desired shape. The additive approach is much better for making complex structures. It’s less good for making strong structures, even if you 3D print with metal rather than the usual plastic, because you don’t start from a single solid block of material.

But strength is non-negotiable for engine parts. That’s especially true in aviation, where components come under a lot of stress — heat, pressure, vibration — and a breakdown can kill people. So, precisely because the stakes are so high in aviation, safety standards are high as well, and the certification process is laborious. Rest assured there was plenty of analysis and ground testing before an aircraft with a 3D-printed part installed — and a human pilot at risk — was ever allowed to take off. (Unmanned systems such as rockets and missiles have already flown with 3D parts).

Further progress will be painstaking. First, this flight was a “demonstration,” only the first step in formally certifying the part for operational use aboard the entire V-22 fleet. Beyond this one part, Naval Air Systems Command (NAVAIR) has identified five other flight-critical components for Marine aircraft — not just for V-22s, but for H-1 and CH-53K helicopters as well — that it plans to 3D print, but the testing process will take well into 2017. That’s at least a year’s work for half-a-dozen components out of thousands.

But there is a pot of gold at the end of this very long rainbow. It just may not be the gold you’d expect. True, there are sexy, cutting-edge applications for 3D printing — Mach 5-plus hypersonic weapons, for example, may not be practical without it. But the big potential lies in replacing existing components for existing systems.

Spare parts are big business. They’re also a big expense for the Defense Department. Military units can’t rely on just-in-time resupply, so they need to bring large stockpiles of parts with them everywhere they go. What’s more, the military keeps weapons and vehicles so long that the original manufacturer of a critical part often goes out of business, requiring costly reinventing of wheels. A 3D printer lets you make parts on the spot, without having to go back to the original manufacturer (if they even exist). Instead of a large stockpile of different parts, you just need a modest amount of material you can use to make any number of parts on demand, and a large software library with designs on how to build them.

That vision is still a very long way from reality. But tests like this one are significant steps toward it.