First UN Mil-Mil Talks With North Korea In 11 years; What They Mean 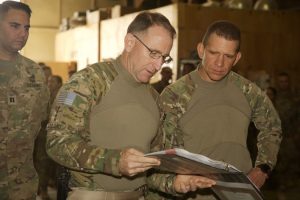 WASHINGTON: Most observers of President Trump’s North Korean diplomacy are understandably skeptical of whether the Hermit Kingdom is any closer to curbing expansion of its nuclear arsenal.

But presumptive commander of UN Korean Forces did present evidence today to the Senate Armed Services Committee that the temperature of conflict on the Korean peninsula really is lower, that the Singapore Summit and other actions are having an effect.

“It’s been over 300 days, as you noted, since the last major provocation from the DPRK and since then, there’s been significant dialogue at multiple levels to include, not well reported, but mil-to-mil communications between U.N. Command and the DPRK at senior officer level for the first time in 11 years (emphasis added),” Gen. Robert Abrams told the new SASC chair, James Inhofe.

But Abrams (yes, his father is the man they named the main battle tank after) was not starry eyed: “So, I would share your characterization that all of the current steps that are ongoing are significant and we should take them at face value. Having said that, you also mentioned that there still remains a significant asymmetric and intercontinental threat from the DPRK as well as they maintain still, the fourth largest conventional army in the world and none of their posture has changed. My view is that we should remain clear-eyed about the situation on the ground and allow diplomacy to continue to work.”

An expert on nuclear weapons in North Korea, MIT associate professor Vipin Narang, noted the importance of the communications between North Korea and the UN command.

“The mil-mil line is really great, a far cry from last year’s high temperature,” he said, cautioning that Kim Jong Un didn’t start behaving this well until he “declared his nuclear deterrent force ‘complete’ and then embarked on the charm offensive. He’s been driving the train, and everyone else is trying to hang on or trying not to get run over!”

He also said Kim was far enough along that he could afford to wait 300 days or more to test those weapons. “Could he benefit from further engine or flight testing? Sure. Does he absolutely need to test, where the cost is the risk of getting attacked and making China nervous? No.”

David Maxwell, former US Special Forces commander in South Korea and now senior fellow at the Foundation for Defense of Democracies, agreed with Narang’s assessment of Kim’s need for nuclear testing. He also offered a less optimistic interpretation of the recent Foundation Day parade where North Korea did not display its missile launchers.

” On September 9th the fact that they did not show off their ICBMs is not something we should assess as positive. They rarely show their large missiles on the September 9th celebrations,” Maxwell said in an email. “Also, in February they showed us their Hwasong 14 and 15 (ICBM) which they normally do when they have a new operational missile.”

Bottom line: The prospect of war is diminished but North Korea’s nuclear arsenal is not.