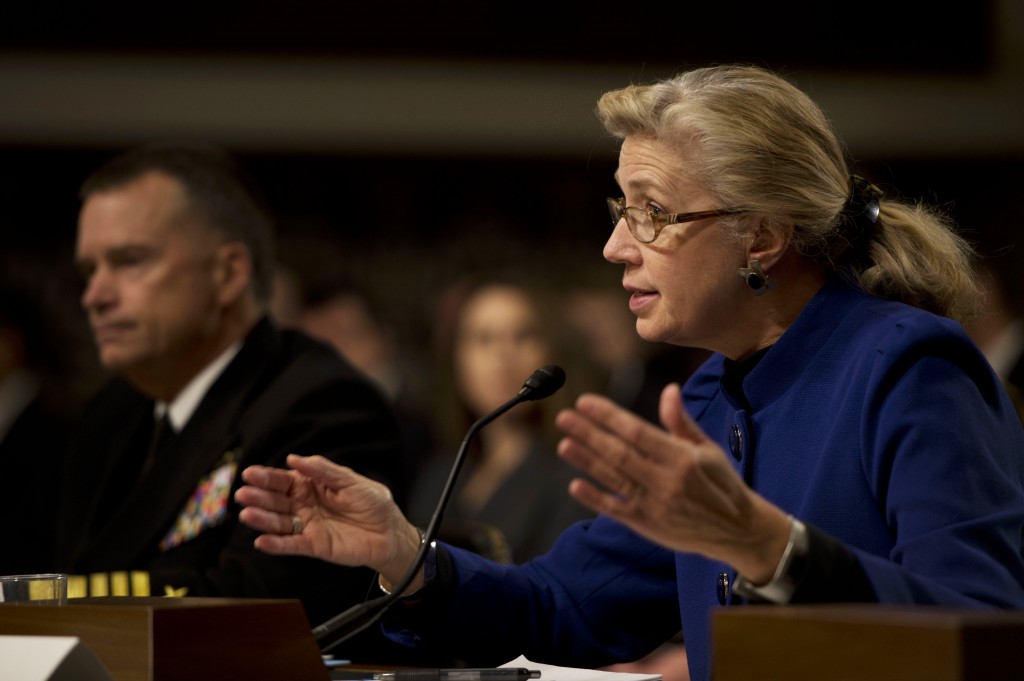 NEWSEUM: At first it looks like pure wishful thinking: The administration’s 2015 budget plan assumes the automatic budget cuts known as sequestration don’t go back into effect in 2016, when the stay of execution known as the Balanced Budget Act runs out. In fact, the Pentagon’s No. 2 official argued today, the administration is taking a calculated gamble, eyes wide open.

“We know sequester’s the law in ’16 . We’re not blind to that fact, and we’ve planned for it,” said Christine Fox, the acting Deputy Secretary of Defense, at the McAleese Associates/Credit Suisse conference here today. But “the president and the secretary of Defense can’t submit a budget that does not support the needs of our strategy and the needs of this nation’s security. We just couldn’t do it.”

“The most important thing that we need to do is get rid of this prospect of going back to sequestration in FY ’16,” Fox said. Even if Congress rejects the $26 billion Opportunity, Growth and Security Fund the administration has asked for to get around the budget limits, which she knows will be “a controversial thing,” Fox said, “we can hold our nose and live through ’15.”

That’s not to say she’s thrilled with the funding level set by last December’s Balanced Budget Act, which slowed the sequestration cuts for 2014 and 2015. “Given where we were at the time, where we’d been through a government shutdown and a year of sequester, stability was a gift and we jumped on that gift,” Fox said. “But when you look at the amount of money the BBA gave to the Department of Defense [for 2015, it’s], frankly just about $7 billion above sequester…. We all wanted the stability but the amount is frankly just not adequate.”

While the military is hastily shedding manpower and retiring equipment to bring down costs, it can’t do so fast enough. “We’ll have in ’15 too large a force for the budget we have,” she said, which means either readiness or modernization or both will have to suffer.

“I fear that we’re heading back to the ’90s,” the long-suffering Pentagon comptroller, Robert Hale, said, referring to the period when repeated raids of maintenance and procurement accounts meant that “the bases weren’t in very good shape and we weren’t spending enough to modernize the military.”

How is this budget supposed to work, my colleague Colin Clark asked Hale, when it counts on so many things Congress may well reject, from retiring the A-10 aircraft to base closures?

“We’ll get some but not all of what we’re asking,” Hale said. “We’ve certainly gotten a lot of questions: ‘Isn’t your budget dead on arrival’? I think that’s not true.”

“They have allowed us to make some significant cuts,” the comptroller said, noting that Congress has already allowed the Pentagon to limit military pay raises to 1 percent a year and allowed the Army to drop from its wartime peak of 570,000 to 490,000 as of the end of 2015 (a level the Army will now go below). “But we don’t tend to get everything, and it will be a struggle if we get only part of it.”

Actually, it’ll be a struggle to get even part of it. Over the past fear years, Fox said, “the biggest surprise for me was how hard it was to explain to people why these level of cuts were bad,” that the Defense Department can’t simply squeeze savings out of a “bloated” bureaucracy, that “we are actually going to cut into the bone of our national security.”

Nor is history on the Pentagon’s side. After the Korean War, after the Vietnam War, and after the Cold War, Lt. Gen. Joseph Martz, the military assistant to the Army’s civilian budget chief, noted that “there’s been a pattern in the last three drawdowns that we go down below $400 billion in constant dollars.”

The current base budget for 2014, not counting wartime supplemental funding, is $476 billion, Martz noted, well above the $400 billion mark. “If you think this is bad,” he said, “that’s the other shoe that hasn’t dropped yet.”