It was a most unusual sight, all those civilians — with a fairly high percentage of women — listening intently to and then chatting with the pilots, who also stood in front of a Tiger helicopter and a Navy NH90 helicopter, rigged for anti-submarine warfare.

I’ve come to the Paris show for nigh on a decade and I’ve never seen crowds so involved with an exhibition. Lots of people get a kick out of walking right next to a huge civilian airliner like the Boeing 777 or the Airbus 380 and it’s really neat to get close to an F-16 or a Pakistani JF-17, but they don’t talk back. The US posts the crews of the aircraft inside the fenced-off “corral,” and folks do come to chat, but the crew aren’t encouraged to discuss operations, and there aren’t any engineers around to tell you how the planes work and such. (Apologies to the hard-core aircraft fanatics who live for the thrill of getting close to lots of their favorite aircraft!) 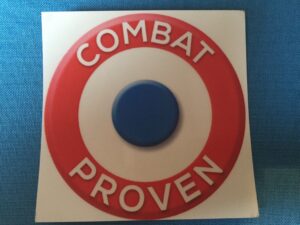 Pierre Bayle, spokesman for the French Defense Ministry, organized today’s efforts to give a generally admiring public a chance to learn more about their forces, but also to tell the story of just how the Rafales, Tigers, NH90s and all the sensors, communications gear and the like that make them effective have performed in real operations. It was his idea to hand out the “Combat Proven” stickers as well. (You’ll see one in the video above).

Bayle’s eye is on the prize of increased exports such as the recent sale of 36 Rafale fighters to India. Part of the idea for building really good military kit is that you won’t have to use it very often because enemies fear what it can do. Once you use it and prove it performs, well, there can be sales to be made.