GCV Contractors To CBO: You Graded The Wrong Vehicle 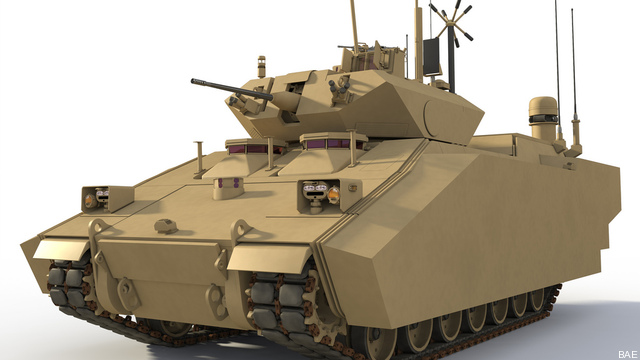 BAE Systems and General Dynamics, the companies developing the Army’s new Ground Combat Vehicle, struck back at the Congressional Budget Office over a CBO report arguing the GCV would be inferior to the German Puma troop carrier. The contractors’ essential argument: CBO based its scoring on an out-of-date concept for what GCV would be, and the prototypes now in development are a lot better.

“CBO stated they are using ‘GCV Concept after Trades’ from the original Army AoA (Analysis of Alternatives) delivered in March, 2011. This might account for the poor qualities given the GCV in the study,” General Dynamics Land Systems spokesman Pete Keating told Breaking Defense this morning. “The GCV requirements today and the two contractor offers are significantly different vehicles from the Army conceptual vehicles in the 2011 AoA.”

Most strikingly, CBO rates the Puma higher than GCV for firepower — the most important single factor in its assessment — in part because the German vehicle has a 30-millimeter caliber cannon while the GCV would only have a 25 mm gun. But the current designs from both General Dynamics and BAE feature a 30 mm gun, same as the Puma.

In short, BAE’s general manager for ground vehicles, Mark Signorelli argued in an email to Breaking Defense, “the characteristics of the notional GCV used in the Congressional Budget Office study do not reflect the capabilities of the BAE Systems GCV design, which is significantly more lethal, survivable, and mobile than any of the alternatives discussed.”

Firepower isn’t the only issue in dispute: Keating cast doubt on CBO’s score for protection as well. “The [report] contains statements about protection on the upgraded Bradley and Puma that are not supported by rigorous classified survivability analysis done by the Army and industry,” he told Breaking Defense.

CBO’s footnotes say they based their survivability score on the Army’s own data, although “the technical data were insufficient to simulate the performance of the [Israeli] Namer or the Puma.” Overall, the report states that “CBO conducted its analysis on the version of the GCV…that the Army proposed before beginning technology development in August 2011…. The Army intends to change the requirements for the amount of protection and the size of the GCV’s cannon [but] CBO’s analysis could not account for those changes because the details are still pending.”

So is the GCV really better than CBO gives it credit for? The contractors naturally would say so, but until completed prototypes are in the Army’s hands, it’s impossible to say for sure.

Updated 5:30 pm with confirmation that the BAE design also incorporates a 30 mm cannon.