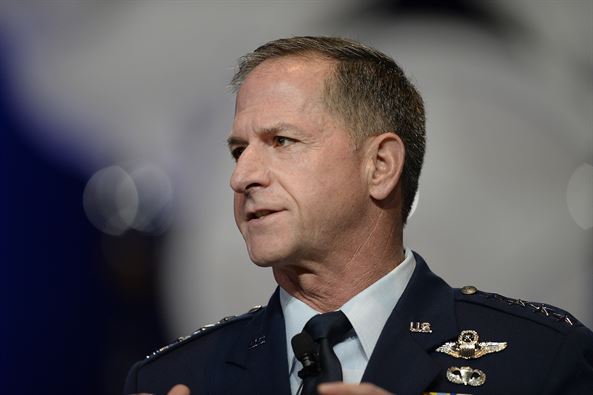 CAPITOL HILL: It’s a refrain space warriors have heard before: the Air Force should head space training and operations, and we need to fix space acquisition.

“In this light, we are eager to be named the lead service for space,” Air Force Chief of Staff Gen. David Goldfein told the packed audience at a Mitchell Institute breakfast this morning. “Lead service” would mean that the Air Force would train and equip all airmen, soldiers, sailors, Marines and Coast Guardsmen who handle space operations.

The last time something like that existed, it was called U.S. Space Command. Stood up in 1985, it was an operational command, that used troops from all four services. Donald Rumsfeld killed it in 2002. On his way out from the breakfast I asked Goldfein if he thought his push would lead to a Space Command. “Let’s not start the dialogue with an org chart,” he said smiling.

He also said he saw the Air Force as the “stewards of space” for the Defense Department. During his prepared remarks, Goldfein highlighted the fact that the Air Force already handles “90 percent” of space operations.

As an example of how integrated space operations can benefit the Joint Force, the chief told a story about a Predator flying over Iraq a few weeks ago. It was experiencing interference with its satellite communications, thus making it difficult to control. The space team, staffed by two airmen, got the report. “Literally, within a minute they found and fixed the problem,” Goldfein said. The problem came from a coalition partner who had not configured their system correctly. The space team was able to turn to the coalition partner at the Combined Air Operations Center (CAOC) and get them to turn off the offending signal. “Just six months ago this would have taken days, maybe even weeks to find and resolve,” he said. The results of building space teams into the CAOC and building close relations with coalition partners was the key. For Predator operations, this has meant they have not had to abort a mission for three months.

Tackling another big issue, Goldfein called for an “honest discussion” about space acquisition, which he noted is cluttered with 60 organizations.

The number of organizations and the separation of functions leaves the Air Force with a “decision-making problem,” he said. It’s worth highlighting that Goldfein made his remarks after the head of Space and Missile Systems Center, Lt. Gen. Sam Greaves, briefed him on all space acquisition programs earlier this week.

Let’s put all this in context. The same debate happened roughly a decade ago. At that time, space acquisition was completely and seriously broken. At one point every major unclassified space program had suffered a Nunn-McCurdy breach, if memory serves. The National Reconnaissance Office, builder and operator of most classified space programs, wasn’t as bad off, but this was the era of the Future Imagery Architecture, arguably the worst acquisition program in Intelligence Community history. And the NRO had other problems, which they, as well as the Air Force, have mostly fixed through the application of good old fashioned engineering and management skills.

I spoke with four very experienced space experts after the breakfast about Goldfein’s comments and they were skeptical. Space acquisition is in pretty good shape today, although it is a cluttered and complex world. And bringing all space experts under the aegis of the Air Force would challenge rice bowls of the other services, which rarely makes for a pretty fight — no matter how sound the reasons for the proposed changes.

Worst line of the breakfast:  “Send a tweet? Thank an airman.” Dave Deptula said that would be our headline. No.