Google Can Track Ships At Sea — Including US Navy; Detailed Maps Planned of Sea Bottom 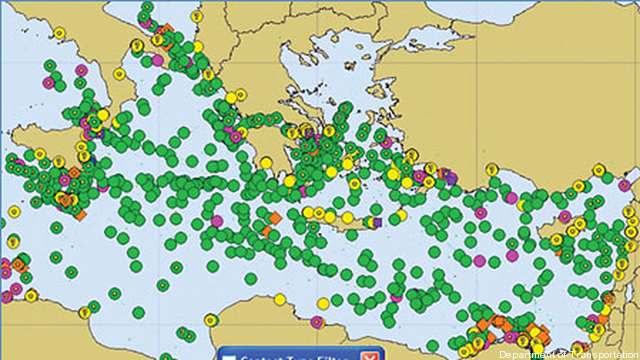 VIRGINIA BEACH, VA: Google will soon make public information about virtually every ship at sea, giving the current location and identity even of American warships. Meanwhile, the company is consulting with the Navy and others about security issues.

Google paid several million dollars for the satellite technology to pinpoint ships’ locations. “These things cost three million dollars for the whole program,” Michael Jones, “Chief Technology Advocate” at Google Ventures, said at the annual Joint Warfighting Conference held by the US Naval Institute and the electronics industry group AFCEA. Google has talked to representatives of 50 navies worldwide about their new technology and has discovered it tracks ships better than their own commanders can. “I watch them and they can’t see themselves,” Jone said. “It angers me as a citizen that I can do this and the entire DoD can’t.”

While none of this makes Google an intelligence agency, it certainly highlights a trend of great interest to the intelligence community and the military.

“I think the macro level issue here is: Welcome to the new age of transparency,” said Keith Masback, president of the US Geospatial Intelligence Foundation. “Access to data from space-based and airborne commercial remote sensing from has become relatively ubiquitous; GPS is ubiquitous and the Chinese and Europeans are also launching their own PNT [positioning, navigation and timing] systems. This announcement by Google regarding ship tracking and collection of bathymetric data, along with the current discussion of the potential of proliferation of unmanned aerial systems in the skies over the United States is the natural extension of the transparency we’ve seen coming for years.”

Like its nascent project to map the ocean floor, Google’s new technology to track ships on the surface takes advantage of prior investments by others. In this case, it’s the Maritime Automatic Identification System, known as AIS, a system of transponders installed in all legitimate seagoing vessels that periodically transmit their position to avoid collisions even when the crews can’t physically see each other due to darkness or heavy weather.

AIS signals are only designed to be detectable up to 20 nautical miles away, but researchers led by Greece’s University of the Aegean developed larger, land-based antenna that can pick up the signal over greater distances — but that still only picks up vessels relatively close to shore. From overhead, however, the two satellites Google is using can detect ships anywhere on the ocean. The company is already working with governments around the world to help them track fishing vessels poaching in their exclusive economic zones and plans to make the data available to an estimated billion users of Google Maps.

While the ship tracking maps are interesting, this is not a new technology although Google has apparently improved it. Google’s involvement will mean, of course, that virtually anyone in the world can access the information. Still, there are very clear limits to the technology.

Most important, any ship can turn off its transmitter, meaning that Google’s tool probably doesn’t pose any threat to critical military operations.

However, the technology clearly could be useful for practitioners of change detection, people looking for patterns to US and other seaborne operations. It could conceivably be useful to terrorists and pirates looking to plan attacks on commercial shipping, for example.

A longer term project may pose graver risks. Google has a five-year project to map the entire ocean floor using an unmanned seagoing sensor, whose accuracy — within “a few centimers” might discover the resting places of top-secret spy satellites and other sunken wreckage national security authorities had thought was hidden forever, potentially triggering a “treasure hunt” by foreign powers, Jones warned. “ONR [Office of Naval Research] had done research on this but they had run out of funding,” Jones said. So Google tracked down 17 people who had worked on the project before their contracts were cancelled, hired them, and has restarted the initiative itself. “The Navy’s tested it, it works great; [but] they got too poor. They just couldn’t do it,” said Jones, himself the proud son of a Navy sailor. “That’s just not right.”

Detailed knowledge of the sea bottom has historically been the purview of those relatively few countries with submarine fleets and deep sea submersibles.

These programs are just examples of the kind of intelligence data available to anyone with a modest investment “instead of a huge 20-year national program,” Jones said. Google already uses the 20 billion photos publicly available on the internet to generate uncannily accurate three-dimensional composite images of cities and individual buildings around the world, even including the interiors of major landmarks like St. Peter’s Basilica in the Vatican. Said Jones, “Don’t sit idly by while adversaries use new technology and you just sleep.”

However, several intelligence experts noted that, while Google’s data possesses enormous commercial appeal, its military and intelligence utility is limited. Most Google images are weeks or months old, at least, making them problematic for that most rarified and demanding use — targeting. And as one intelligence source noted: “Just because you have the data, doesn’t mean you can analyze the data or know how to use it.”