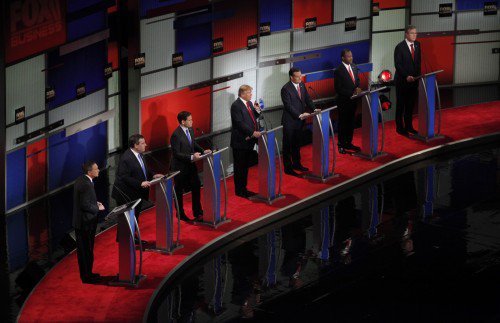 WASHINGTON: The men who urgently want to be commander in chief of the United States military offered a glum vision of the state of the armed services last night.

Donald Trump: Our military is a disaster.

Ben Carson: We have the world’s best military, even though he (President Barack Obama) has done everything he can to diminish it.

All the candidates promised to fix this parlous state of affairs. All but Jeb Bush ignored the incontestable truth that the main problem lies with Congress and its inability to permanently fix the seemingly politically insoluble problem of sequestration.

Bush claimed deployment rates “are too high for the military personnel” and said not enough procurement is happening to replace aging gear. “We have to eliminate the sequester, rebuild our military in a way that makes it clear that we’re back in the game,” he said. But he didn’t mention Congress.

The GOP candidates’ vision stood in stark contrast to that offered by President Obama in his Tuesday State of the Union speech.

“I told you earlier all the talk of America’s economic decline is political hot air. Well, so is all the rhetoric you hear about our enemies getting stronger and America getting weaker. The United States of America is the most powerful nation on Earth. Period. It’s not even close,” Obama told the world. “We spend more on our military than the next eight nations combined. Our troops are the finest fighting force in the history of the world. No nation dares to attack us or our allies because they know that’s the path to ruin. Surveys show our standing around the world is higher than when I was elected to this office, and when it comes to every important international issue, people of the world do not look to Beijing or Moscow to lead – they call us.”

But the GOP sees a different world. “And for the life of me, I have no understanding why the president thinks that everything is going well. Terrorism is on the run, China, Russia is advancing their agenda at warp speed, and we pull back,” said Bush.

The most moderate response came from Chris Christie. “Military action, Maria, would be used when it was absolutely necessary to protect American lives and protect American interests around the world. We are not the world’s policeman, but we need to stand up and be ready.”

OK. But what will any of these men do differently once they encounter the sobering realities of power and perception delivered in the President’s Daily Brief? Hopefully, they or their Democratic opponents will begin with revamping the National Security Council and ensuring that the major government departments advise the president and execute his orders, instead of the NSC serving as a shadow cabinet. Then they can work on convincing Congress that sequestration must be abolished.