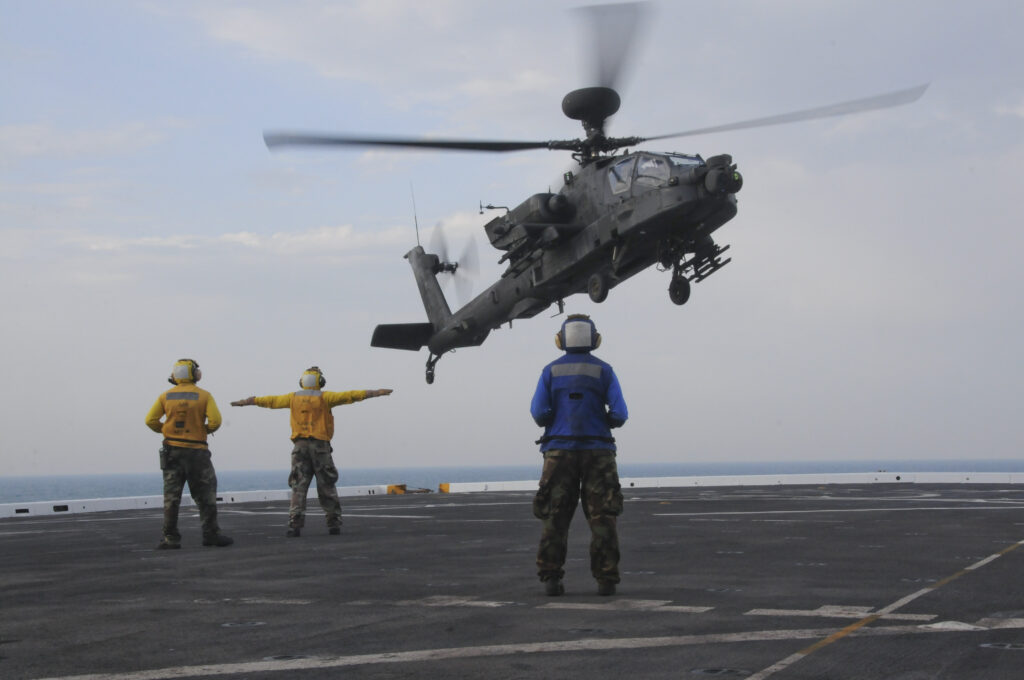 An AH-64 Apache from the South Carolina National Guard lands on a Navy ship — a rare skill in the Army. But the Pentagon’s current budget plans would transfer all Guard Apaches to regular active-duty units.

WASHINGTON: National Guard attack helicopter units just can’t be as battle-ready as full-time regular Army ones, Deputy Secretary of Defense Christine Fox has been telling the Hill. That’s why the Guard should give all its AH-64 Apache gunships to the active-duty force to replace older aircraft lost to budget cuts.

“Combat elements must be in the AC [active component],” says one of Fox’s briefing slides, which were obtained by Breaking Defense and incensed one Guard commander we showed them to.

What proof does the Office of Secretary of Defense offer? Fox’s briefing slides say the Guard’s Apache units took longer to train for deployments in Afghanistan and Iraq than its transport helicopters – which is the only kind of chopper that the Army’s plan would leave in the Guard. Then, once the Guard Apaches did deploy, they overwhelmingly took on less tactically complex “security” missions like convoy escort, while active-duty gunships did more than 90 percent of the most demanding jobs, supporting first the initial invasions and then counterinsurgency operations.

We’ve heard the Army make similar arguments before about Guard ground forces, most prominently when Maj. Gen. John Rossi told me Guard brigade combat teams mostly took on lower-complexity missions in Afghanistan and Iraq. But this is the first time I’ve seen such a case against Guard aviation, the most bitterly controversial issue in the Army’s plan to cope with the budget cuts known as sequestration. Perhaps most striking, this is the first time I’ve seen an argument against Guard readiness made by a senior official from the Office of the Secretary of Defense, let alone by the No. 2 in the entire Defense Department.

The Guard advocates and officers I talked to are, unsurprisingly, upset. “DoD – probably with a lot of help from the Army – is trying to ‘Rossi’ the Apache units,” said John Goheen, top spokesman for the powerful National Guard Association of the US (NGAUS), when I showed him the slides. “It surprises me that the Army has the audacity to clear some of this stuff…. This is classic cherry-picked data.”

“It’s laughable to us, laughable,” said the commander of one Guard Apache battalion, Lt. Col. James Fidler of the South Carolina Army National Guard. When his unit deployed to Iraq in 2004-2005 for 14 months, “we were doing the same exact mission sets as our active-duty counterparts,” Fidler told me. “Our helicopters were coming back every day with bullet holes in them.”

“About four doors down from me is my senior instructor pilot: He got a Purple Heart” after a bullet penetrated his Apache’s armored canopy, Fidler went on. The pilot went back to the US, healed, and returned to Iraq into time to get his gunship badly shot up again. “Trying to take these airframes and dishonor the service and capabilities of these guys is incredibly disingenuous.” 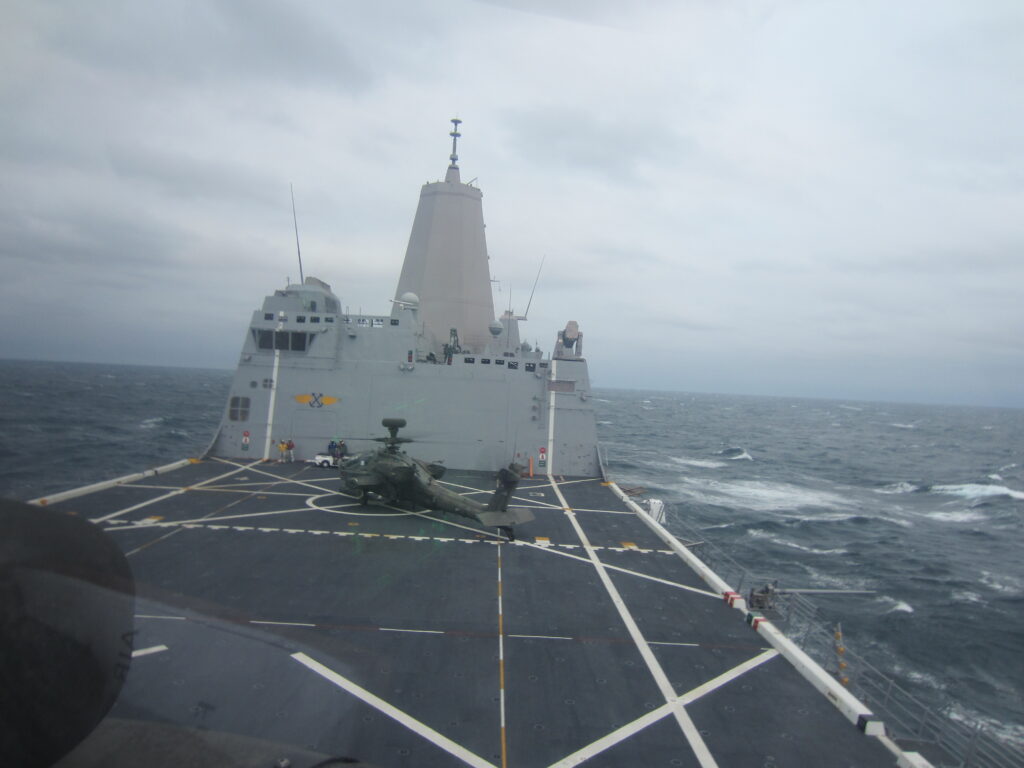 One of Lt. Col. Fidler’s Apaches on the tilting deck of a Navy ship.

The South Carolina battalion didn’t deploy again until 2011, when the US was withdrawing from a much less violent Iraq. This time its mission was “security”: providing air cover to bases, convoys, and units headed to Kuwait. “[But] we don’t choose the time and place where we serve,” said Fidler. In fact, after the battalion’s 14-month deployment early in the war, Defense Secretary Robert Gates had restricted how often Guard and Reserve troops could deploy to keep them from burning out or losing their civilian jobs.

The Guard doesn’t get to say how long it needs to train up, either: That’s determined by the Army, and Guard officers from multiple types of units were telling me years ago that much of that training was redundant. “120 days….that was absolutely ridiculous,” Fidler said.

“We flew less at the mobilization site than we fly at home station [in South Carolina],” Fidler went on. “I’m an Apache pilot and they wanted me to go to nutrition classes, cultural classes. They wanted me to know how to search vehicles.” It also didn’t help that the Guard had older A-model Apaches that the Army deemed inadequate for Iraq, so they had to retrain on the newer AH-64D. (Now the Army is upgrading the force to the AH-6E “Guardian” model).

Once they finally got to Iraq, Fidler said, his unit ended up being the only Apache battalion in the whole country for roughly the last month of the withdrawal operation, he said, escorting the commanding general out on very last day. Then they took on a new mission: guarding the Gulf against Iran.

That required landing on Navy ships and taking off again, Fidler said, skills that the Apache community had stopped practicing during the post-9/11 years. His pilots were the first in years to be “deck-landing qualified,” he said, and even today they’re the only unit that trains other Army Apache crews, active duty and Guard, to operate from ships. In the last 12 months, the South Carolinians have even conducted two live-fire exercises with US aircraft carriers. 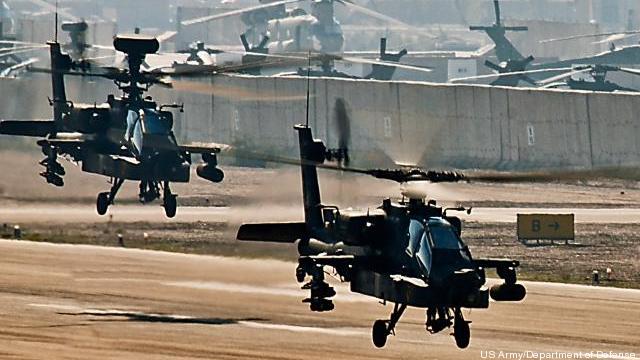 Most Apache units, both active-duty and Guard, have spent the last decade operating in two-gunship teams like this one — not the larger formations required for conventional wars.

It’s not the skill level of individual Guard Apache crewmembers that the regular Army is worried about, however. It’s not even their ability to operate in well-coordinated two-gunship teams. As with Guard ground combat brigades, the issue is “collective training”: having the time to train large units – say, an eight-Apache company or a 24-Apache battalion – to operate together in support of ground forces doing complex combat missions like counterinsurgency or mechanized maneuver.  And since working side-by-side with drones (aka “manned-unmanned teaming”) is central to the Army’s concept for future Apache operations, the training required is just going to get even more complex.

“AC Apache units train about 200 days/year,” Fox’s briefing goes on. (Roughly half of that is “collective” training, half individual, an Army official told me). “[Guard] Apache units train 39 days plus extra training days to maintain individual flight proficiency.” (Emphasis mine).

That “extra” time sure adds up, though: “Our pilots train well over a hundred days a year,” Fidler told me. Other Guard helicopter units that I’ve heard about are similar.

But, as the Army says, that’s just to keep up individual skills. Surely the active-duty units get more collective training time in flying lots of aircraft at once?

Not so, said Fidler. “You have active-duty guys acting like they’re doing a lot of company and battalion-level missions, [but] they’ve been doing the same damn thing we’ve been doing for the last 10-11 years,” he told me: flying missions in two-gunship teams, because that’s what the scattered, small-unit combats of guerrilla warfare required.

Only now is anyone in the Apache community, Guard or regular, refocusing on larger-scale maneuvers. At a December 2012 conference at Fort Rucker, Alabama, the Army’s center for helicopter training and doctrine, Fiddler said, “one of the key topics of emphasis was that few of our Apache soldiers – very few – knew what it meant to go to the field, and few knew what it meant to fly in company and battalion formations. We have been used to FOBs [forward operating bases] and teams of two.”

“Every Apache unit” is in this predicament, Fidler emphasized. It’s not the Guard’s issue: It’s the regular Army’s as well.

The question is how to fix this Army-wide problem with limited funds. Guard units are less expensive to keep up in peacetime than their active-duty equivalents, although Guard Apache battalions are less of a bargain because gunships are expensive to operate and require a lot of full-time maintenance personnel. But can Guard units find the time to keep up with the high-tech, tactically complex training the Army considers necessary for future missions? Even if they can, can a cash-strapped Army afford to let them keep their Apaches? Then again, if the Guard Apaches move to the active force, can the Army afford to lose the Guard’s experienced pilots? “Our unit alone has 100,000 hours of Apache experience,” Fidler told me.

Pentagon leadership says transferring the Apaches is the keystone of a general overhaul of Army aviation, the only way to fit the force in tighter budgets while retaining the most modern and effective aircraft. That’s the case the department is now trying to make to Capitol Hill. We’ll have to watch this year’s legislative battles to see if they succeed.