HAC Votes To Retire The A-10 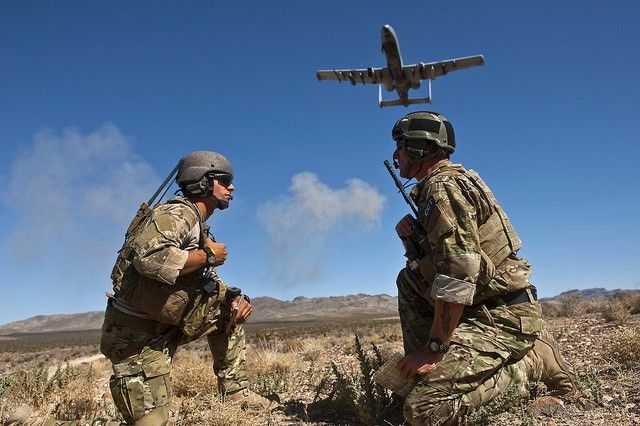 An A-10 “Warthog” flies low over two ground troops

CAPITOL HILL: The House Appropriations Committee bucked the trend today, voting 23 to 13 to retire the beloved A-10 Warthog ground attack plane. Both the House and Senate Armed Services committees have voted to save it. While HASC and SASC are the authorizers who set defense policy, it’s the appropriators who vote the money to keep planes in the air.

“We’ve got to pay for stuff,” said Rep. Pete Visclosky, the top Democrat on HAC’s defense subcommittee, at the HAC-D mark-up this morning. By rejecting proposed cuts to popular programs like the A-10, he said, Congress is refusing to face up to hard decisions required by the automatic spending cuts known as sequestration. “Staying the course and hoping for some fiscal relief next year is wishful thinking,” Visclosky said, echoing other top defenseDemocrats like Rep. Adam Smith and Sen. Carl Levin.

Both Visclosky and the chairman of HAC’s defense subcommittee, Rep. Rodney Frelinghuysen, acknowledged the A-10 had done honorable service. Flying low and slow over the battlefields of Afghanistan and Iraq, with a combination of firepower and armor no other aircraft can match, the  Warthog has become the American infantryman’s favorite airplane, the ugly steel angel on his shoulder.

But Army leadership has deferred to the Air Force on how to handle the Close Air Support mission. Air Force leadership, for its part, has repeatedly argued that the A-10 can’t survive in future conflicts against adversaries with better anti-aircraft weapons than the Taliban — sophisticated missile technology is proliferating alarmingly around the world — and that they can’t afford a single-mission aircraft in an era of sequester-strangled budgets. HASC and SASC rejected the Air Force’s argument, but House Appropriations accepted it.

Retiring the A-10 will save “billions, not millions” to spend on more modern, more versatile multi-role aircraft, Rep. Frelinghuysen said. To keeping the Warhog would require cuts elsewhere: the entire B-1 bomber fleet, hundreds of F-16 fighters (including politically popular Air National Guard units, he noted) or the Operations and Maintenance accounts (O&M) essential to sustain military readiness.

It was O&M that would have taken the hit, to the tune of $400 million, in the amendment that Rep. Jack Kingston proposed this morning to restore the A-10. The authorizers had paid for the A-10 essentially off-budget, by charging it to the Overseas Contingency Operations (OCO) fund that pays for the war in Afghanistan and related operations around the world. But appropriators generally hate that kind of fiscal sleight of hand, especially since the OCO budget is even funnier money than the regular budget. In fact, Visclosky (a Democrat, remember) had earlier grumbled that the Obama administration was packing new projects into OCO — most recently a $1 billion fund to beef up European security in face of the Ukraine crisis — faster than it was providing information on what exactly it planned to spend or even how much: “The committee has been placed in a very difficult position of having to defend a $79.5 billion placeholder.”

So, since the appropriations committee didn’t allow Kingston to go off-budget, he had to find real funds to keep the A-10 flying, which meant he had to say specifically what he was going to hurt. Forced to confront that keeping the A-10 would require cutting something else, and urged on by both the Republican Frelinghuysen and the Democrat Visclosky, the committee voted 23 to 13 against Kingston’s amendment. The committee today committed a rational and prudent act that deserves recognition. But will this lead to the plane’s retirement, or will Congress — as it usually does — chop the baby in half and claim victory twice?