WASHINGTON: After 15 months of bitter public debate between regular Army leadership and National Guard advocates, the commission Congress created to settle the matter met for the first time Friday and chose its chair and vice-chair, announced today. Heading the commission will be Gen. Carter Ham, a retired regular officer, while his No. 2 will be Thomas Lamont, the only Guard veteran on the commission. Now the work can really start — with just nine months before a Feb. 1 deadline to report back to Congress. 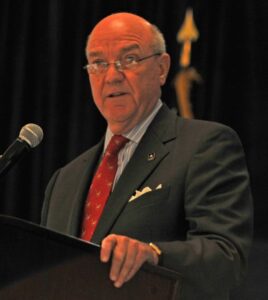 “It looks like it will be a pretty intense summer,” said John Goheen, spokesman for the powerful National Guard Association of the United States, which led the charge to create the commission. The commissioners face an enormous task: Their mandate is not just to settle the high-profile argument over transferring all Guard AH-64 Apaches to regular Army squadrons — it encompasses the entire long-troubled relationship between the regular Army, National Guard, and Reserve. Working backward from February 1st, given the time it takes to draft, revise, and print up a major report, “they have a lot to see and a lot of decisions to make before they can write the report,” Goheen told me. “They’ve a fairly narrow window to meet that 1 February deadline.”

Goheen’s boss, NGAUS president Gus Hargett, and other observers have expressed concern that the commission includes no Guard generals or career state-level employees. Even Lamont lacks stars on his shoulder — he retired as a colonel — and spent a good chunk of his career in the Pentagon, where he was assistant secretary of the Army for manpower and reserve affairs. Five of the other six members are retired regulars or former Pentagon officials: retired Sergeant Major of the Army Raymond Chandler; retired Gen. Larry Ellis; retired Gen. J.D. Thurman; former Pentagon comptroller Robert Hale; and former deputy undersecretary of defense for strategy Kathleen Hicks. The exception is retired Army Reserve chief Lt. Gen. Jack Stultz, but the Reserve is a purely federally entity very different from the Guard. Likewise, the commission’s interim staff — which given the tight timeline may be its permanent staff — is drawn from Army headquarters officers and officials.

Given Lamont’s Guard service, Goheen said, “we are glad to see him in the no. 2 role” — but bear in mind, he added, that “Gen. Ham certainly has had a lot of exposure to the Guard in his last few assignments.” Indeed, it’s hard to have served as an Army commander at any level in the last 13 years and not worked with Guard troops, who continue to deploy. Looking at the commission overall, Goheen emphasized, “all eight of them have dedicated their lives to national security.”

The full text of the commission’s announcement follows below:

Commission on the Future of the U.S. Army Announces Chairmanship

The congressionally mandated National Commission on the Future of the U.S. Army today named retired Army Gen. Carter Ham as its chairperson, and former Assistant Secretary of the Army for Manpower and Reserve Affairs Thomas Lamont as the vice chair.
Ham, currently an advisor at Jefferson Waterman International, was most recently commander of U.S. Africa Command where he led all U.S. military activities across the continent. Lamont, who was assistant secretary from 2009 to 2013, also served as an attorney in private practice and as the state staff judge advocate general for the Illinois Army National Guard.

The commission was formed by the 2015 National Defense Authorization Act (NDAA) and will undertake a comprehensive study on the organizational structure of the Army. The duties of the commission include studying the structure and size of the army, determining the proper force mixture of the active and reserve components, and conducting policy analysis to document how policies effect mission requirements. The findings of the panel will be presented to the president and to congressional defense committees no later than Feb. 1, 2016.

In addition to Ham and Lamont, appointees to the commission are listed below in alphabetical order:

Retired Sergeant Major of the Army Raymond Chandler. Chandler served in every key enlisted position from combat armor units to being the most senior enlisted member of the Army from 2011 to 2015.

Retired Army General Larry Ellis, president and CEO of VetConnexx. Ellis served in a number of command and leadership positions in the United States, Bosnia and Herzegovina, Germany, South Korea and Vietnam, and commanded Army Forces Command from 2001 to 2004.

The Honorable Robert Hale, a Fellow at Booz Allen. Hale previously served as DoD comptroller and chief financial officer from 2009 to 2014 and as assistant secretary of the Air Force for financial management from 1994 to 2001.
The Honorable Kathleen Hicks, Ph.D., director of the international security program at the Center for Strategic and International Studies. From 2009 to 2013, Hicks formerly served as the deputy undersecretary of defense for strategy, plans, and forces and then as principal deputy undersecretary of defense for policy.

Retired Lieutenant General Jack Stultz, member of the board of the VSE Corp. Stultz also served as the commanding general of the U.S. Army Reserve Command from 2006 to 2012.
Retired General J.D.Thurman served as the commander of the United Nations Command for the Republic of Korea, U.S. Combined Forces Command and U.S. Forces Korea from July 2011 until October 2013, following his command of Army Forces Command from 2010 to 2011.

For more information about the National Commission on the Future of the U.S. Army, contact dfo.ncfa@ncfa.ncr.gov