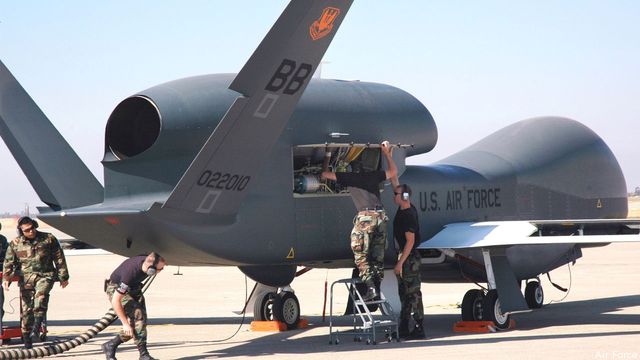 CAPITOL HILL: Even though Global Hawk is built in his district, House Armed Services Committee Chairman Rep. Buck McKeon told me today that he would not personally push to save the Block 30s from oblivion.

“I will not be involved in trying to force something just because it’s best for my district,” McKeon said today during the interview on C-Span’s Newsmakers show. The Air Force killed the Global Hawk Block 30 purchase in the 2013 defense budget, arguing that the venerable U-2 reconnaissance plane does a better job for less. That cut is estimated to save the Pentagon $2.5 billion. The chairman clearly wasn’t abandoning the Block 30s, but he did note that the U-2 is also maintained in his district. Perhaps in an effort to ensure his subcommittee chairmen keep their prerogatives and no one accuses him of pork barrel politics, he said the relevant subcommittee would handle the issue. McKeon did say he had “some concerns” about choosing a “50-year-old plane” over a more modern aircraft.

On defense sequestration, McKeon said he had not put his plan to avoid the automatic defense cuts before the GOP leadership yet. He’s waiting to get 80 to 100 signatures on his proposed bill before he does that. But he also said he would strive to get more money for the Defense Department. “If there’s any way to get more money, I will try to do that,” he said.

He also offered sharp criticism of the Pentagon leadership for not planning for sequestration.
“I think it’s irresponsible to know this is out there and not pay any attention to it,” he said. “At some point, I think they are going to have to face up to this.”

Perhaps the most intriguing part of the interview was McKeon’s reaction when I asked him if he thought the administration was managing the conflict with Iran well. The chairman received a classified briefing yesterday on the subject and appeared to express doubts about how the Obama Administration is handling the situation with Iran.

“My concern is that we are resolute enough to make sure that when we say we are not going to allow them a weapon, we’re not. I hope this isn’t some wink-and-a-nod thing,” he said. Then I asked him if he was questioning the administration’s “resolve on that.” There was a long pause, during which he stared me straight in the face. “I said, I hope that we are really serious about it.” The implication that he doubts the administration seemed pretty clear.

He also mentioned that the U.S. has “channels” we can use to inform the Iranians “where the red lines are.” Perhaps we need to call the Swiss ambassador to Iran or contact the Iranian Mission to the UN and find out what’s going on and if they really get the message we think we’re sending?