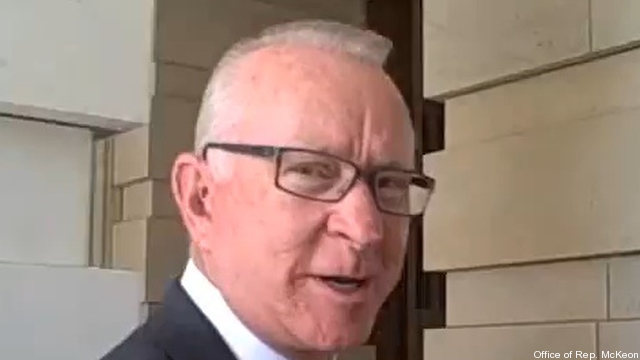 Buck McKeon wants his $450 billion back. The Chairman of the House Armed Services Committee doesn’t just want to avoid sequestration, which would automatically cut $500 billion from Defense spending over the next decade if Congress can’t get its fiscal act together. McKeon (R-Calif.) wants to roll back the $450 billion in cuts that the Obama Administration has already begun making in compliance with the Budget Control Act passed last year.

“I held my nose and voted for the BCA, with the hopes that we could fix the serious problems with the bill shortly after,” McKeon declared in a speech today at the Ronald Reagan Library in Simi Valley, California. “That’s why one of my top priorities is getting that half a trillion dollars back.”

McKeon filled his speech with Republican red meat. He opened with an invocation of Ronald Reagan’s famous “bear in the woods” campaign ad calling for a strong defense. He called Iran’s nuclear program “perhaps the gravest threat to the global order we have seen since the collapse of communism.” He pledged that despite recent setbacks “we can still leave Afghanistan with our heads held high and the Taliban defeated” if we preserve. And he attacked President Obama. The $43 billion in defense cuts the Administration has proposed for 2013? “They think that if they toss the military overboard, they might be able to stay afloat.” The much-vaunted “strategic pivot” to Asia? “I call it a head fake. A pivot implies that you have some body weight behind the movement.”

“I will not be a partner to the management of this great nation’s decline,” McKeon declared. “I will not be complicit in the dismantling of the Reagan military.”

At the same time, though, McKeon also put on notice the Tea Party conservatives who suggest that letting sequestration happen would be okay. “It pushes us far past the limit of acceptable risk and would put this great country in great danger,” he said. McKeon’s alternative? “I have introduced a bill that would pay down the first year of sequestration by naturally shrinking the federal workforce,” he said. “This bill does not fire federal workers, but decreases their ranks naturally. If one person quits or retires, two others must quit or retire before an agency can hire another worker.”

But McKeon isn’t nailing his flag to any masts: “I am open to any compromise or any plan that pays down sequestration in a responsible manner,” he said. Given election-year gridlock in Congress, that will be hard enough.