HASC Debates Sequestration’s ‘Terrible Dilemma’: A Ready Force Or A Large One 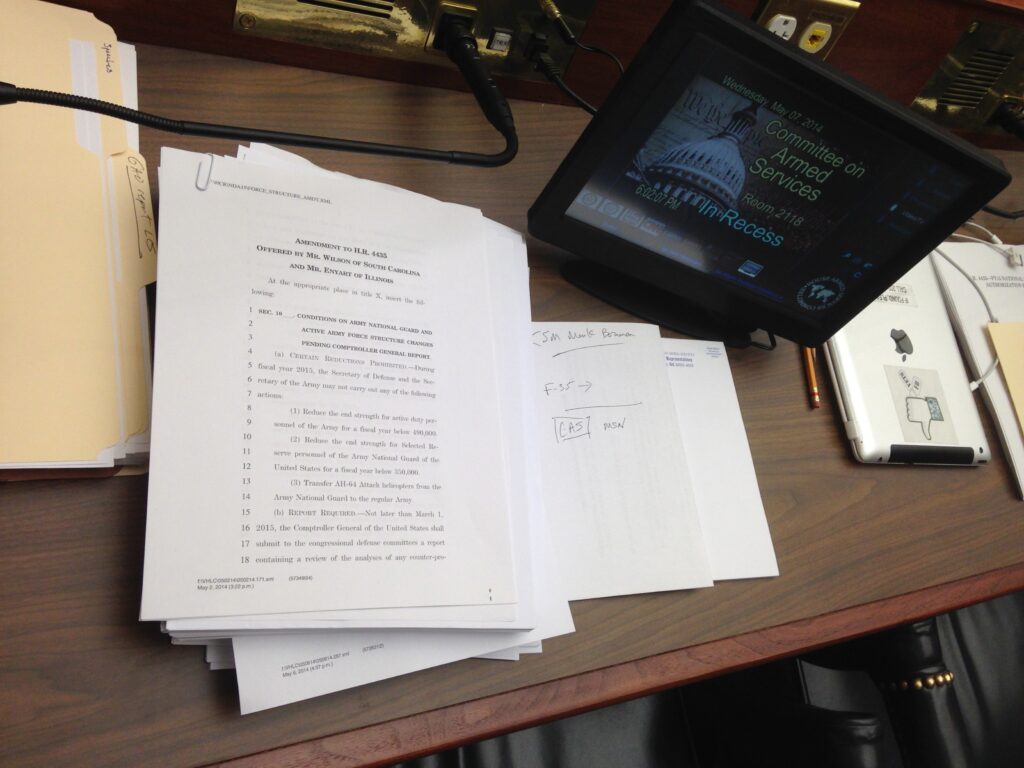 CAPITOL HILL: “Given sequestration, given all the cuts…we can have a larger force or we can have a ready force,” said Rep. Adam Smith. “I’m going to choose the latter.”

But the 2015 National Defense Authorization markup that the House Armed Services Committee will pass sometime tonight raids $1.4 billion from operations, maintenance, and training funds. “There’s a legitimate debate to be had” about that choice, said Smith, HASC’s top Democrat, but the committee is not engaged in that debate. Instead, he said, “we’re closing our eyes and plugging our ears and saying ‘no, no, no, no, we’re not going to make that choice.'”

The immediate issue was an amendment by HASC seapower subcommittee chairman Rep. Randy Forbes to prohibit the Navy from mothballing 11 cruisers and three amphibious warships as a cost-saving measure until it has enough money to modernize them and return them to duty. “We have no guarantee at all that those cruisers are going to ever see the light of day,” Forbes told me outside the hearing room, noting that the Navy had previously proposed scrapping seven of them outright. Forbes called the plan “a placebo,” not a genuine solution to the Navy’s funding shortfalls.

But the bigger issue that Smith raised — readiness versus size — was “the crux” of the “terrible dilemma” that the committee and indeed the country face on defense spending, HASC Chairman Buck McKeon told his colleagues.

“It’s best for the nation right now that we hold onto as much as we can,” McKeon said, rather than lay up ships or close bases. The chairman — who retires at the end of this year — is consciously choosing a strategy of delay. Most legislators are just beginning to understand the damage the automatic spending cuts known as sequestration will do to their home districts, he argues. As McKeon put it at the Heritage Foundation yesterday: “Too many members of Congress took my warnings [last year] as just numbers on paper,” McKeon said. “Now, they are rushing up to me on the House floor to plead ‘save my base’ or ‘save my armory’ or ‘my factory,’ or ‘my production line.’ I’d like to help them, but I can’t.”

So after this fall’s elections — when, though McKeon didn’t mention this, the Tea Party is likely to lose seats — he prays that the political balance will shift and the defense budget will rise, he told the committee today: “I’m hoping we can just hold [long] enough that when realization hits, next year we can get rid of sequestration, and some miracle happens.”

“I grant you there’s a lot of wishing in this,” McKeon admitted today. “There’s a lot of hoping in this.” If the sequestration worm doesn’t turn, he noted, next year’s cuts will be much worse, since last Christmas’s Ryan-Murray Bipartisan Budget Act postponed most of the bite until fiscal year 2016.

Smith argued that delaying hard decisions just makes 2016 even harder. “You think it was difficult to save that eleventh aircraft carrier this time?” Smith asked, referring to how Forbes found funds to keep the USS George Washington in the fleet. Well, the Democrat continued, that’s just going to get harder if you won’t let the Navy save money — $4 billion over five years — by laying up those cruisers.

Quite the contrary, Forbes told me in the hallway outside the hearing room. “The worst thing that we can do is lull people into believing, ‘OK, we’ve taken care of this,'” he said.

So, I asked, are you agreeing with McKeon that the best plan is to hold on to all you can and pray for a miracle in 2016? “I think it’s ‘pray for reason,'” Forbes replied. “I’m convinced that when people see what’s actually happening, policymakers are going to come to their senses.”

But if they don’t, at what point does a lawmaker start trying to make the best of sequestration-level funding? “I’m not going to ever be there,” Forbes replied. “I’m be screaming this all next year.” After all, he said, people told him back in 2013 to accept sequestration as inevitable — and then the Ryan-Murray agreement delayed most of the cuts two years. If Congress could change sequestration once, he said, it can change it again.

In the meantime, though, aren’t you risking readiness to sustain a larger force, exactly what Smith warned about? “Every expert we brought in, and we brought in a lot,” Forbes told me, “all of them said the same thing: ‘I don’t want to have a hollow force, but I’d rather have a hollow force that I can build back up — because we’ve had to do that before — than [have] a force that I cannot build back up again because it was gone.'” Readiness you can recover in a hurry if you have to, Forbes said, but scrapped ships and disbanded brigades take years to replace: “Once they’re gone, you can’t build them back fast enough.”