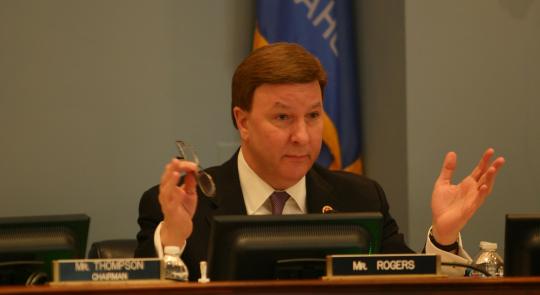 “We could have saved the Air Force and the Congress a lot of aggravation if we put a half of a billion dollars in a parking lot and just burned it,” Rep. Mike Rogers of Alabama, chairman of the House Armed Services strategic forces subcommittee, said at yesterday’s acquisition reform hearing. Stratforces, of course, oversees all military satellites, so Mr. Roger’s opinion carries quite a bit of weight.

Rogers was talking about the last bird in the Defense Meteorological Satellite Program, but he broadened his attack to include all Air Force space programs, which most observers and Hill staff believe has improved substantially over the last decade.

“Why should we have any confidence the Air Force can manage space programs when we look at this example?” Rogers asked Richard Lombardi, acting Air Force acquisition chief.

But what Rogers left out was that Congress — and everybody else involved with this issue — has bungled the issue of US weather satellites, once a crown jewel of American technology policy, military utility and international business, for a long time. 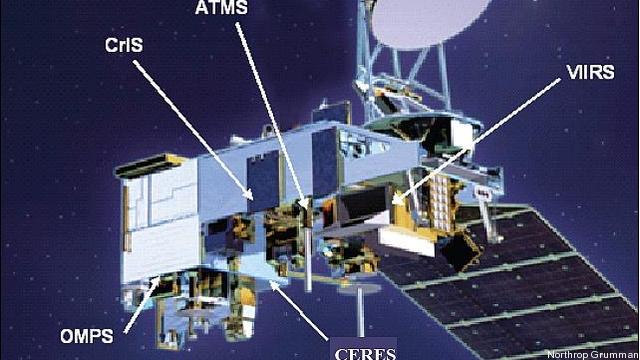 This all goes back to one of the most perfect storms in space and US acquisition history, NPOESS. Regular readers of my coverage will remember the findings of the Aerospace Corp., a highly respected federally-funded group that provides high-end help to the Air Force and intelligence community on space and other issues. If NPOESS had worked then the Air Force wouldn’t have had to make a decision about the last DMSP bird. But the Office of Secretary fo Defense, the Air Force, the White House, NOAA and NASA have all been reluctant to actually make decisions about whether to buy weather data from friendly foreigners, build new satellites, decide which agency would do which weather jobs and generally just move ahead after NPOESS.

The White House supposedly fixed all this back in 2010 when it announced the restructuring of the National Polar-orbiting Operational Environmental Satellite System, as NPOESS was formally known. But the Air Force really wants to buy F-35s, KC-46 tankers and Long Range Strike Bombers and faces a budget crunch. So it kept putting off decisions about the last DMSP.

As my colleague Mike Gruss at Space News noted in his story about this, Congress did not fund DMSP in the 2016 Omnibus Spending Bill and refused to provide $120 million to launch DMSP-20 around 2018. “The combination,” he says, “effectively ended the program.” So, Mr. Rogers is being a wee bit unfair to the Air Force and conveniently ignoring the role the powerful appropriators played in all this. Not to mention, he’s left out all the incredible mess of Congress and the White House and the Pentagon and Commerce and NASA together wasting several billion dollars at least on NPOESS (figuring out exactly how much was spent on various NPOESS bits and bobs is challenging.) Which led to this problem in the first place.

What really matters now is that the White House provide clear direction to all the American players about who will do what to gather weather data and make sure Congress is on board with those decisions. Can they do it?

For those who are really interested, here’s an excellent and authoritative summary of NPOESS and the weather sat mess from 2012 by the Congressional Budget Office of NPOESS,”Options for Modernizing Military Weather Satellites” by Michael Bennett. It’s missing the most recent actions, but covers most of the ground:

“It began in 1995 and was intended to develop new satellites to replace the DMSP and POES satellites. The NPOESS program sought to build satellites centered on a common set of instruments and that would operate in all three orbits currently covered by U.S. polar-orbiting weather satellites. However, the program was technically ambitious, and it suffered a series of problems with the program management structure, cost growth, and schedule delays. In 2010, after about 15 years of development and several program restructurings, the NPOESS program was terminated and replaced by separate NOAA and DoD programs. NOAA, partnering with NASA, established the Joint Polar Satellite System (JPSS) program, while DoD formed the Defense Weather Satellite System (DWSS). Both the JPSS and DWSS programs were intended to draw heavily on development done in the NPOESS program. In the fiscal year 2012 appropriation process, however, the Congress instructed DoD to terminate the DWSS system. In response, DoD now plans to delay the need for a new weather satellite by changing the way in which it will field the two DMSP satellites that have yet to be launched; the department is also considering the best approach for developing the next generation of satellites, dubbed Weather Satellite Follow-On (WSF).”