Helsinki Summit: What Can Trump & Putin Learn From Finland? 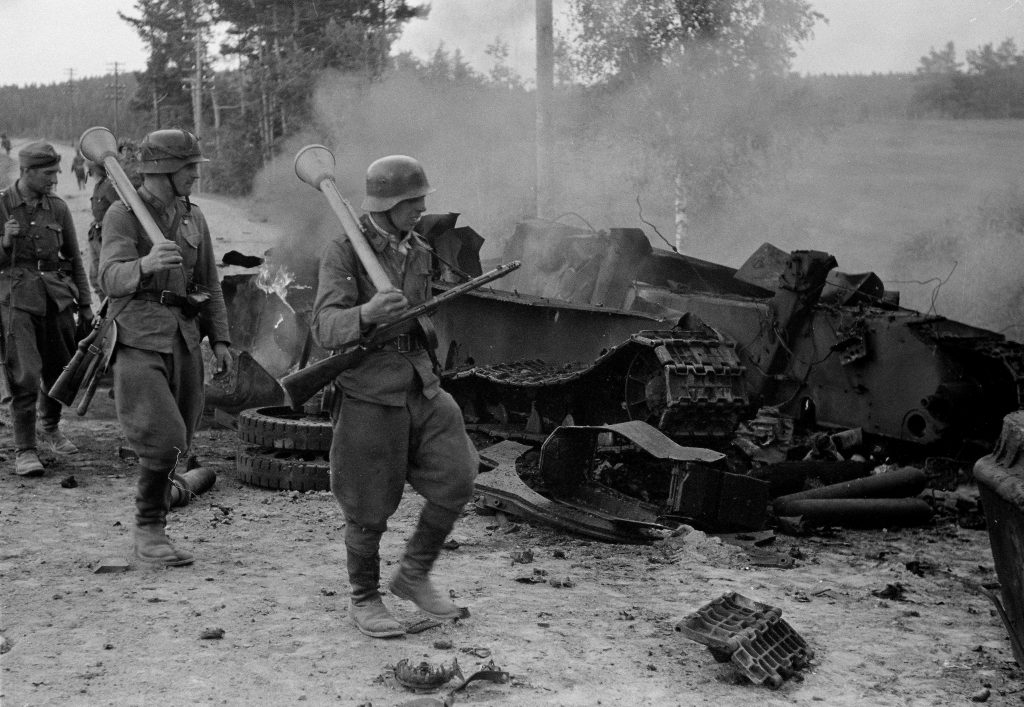 Finnish soldiers — with German helmets and Panzerfaust anti-tank weapons — pass a destroyed Soviet T-34 tank in June 1944, less than three months before the Finns withdrew from their uneasy alliance with Nazi Germany.

Presidents Putin and Trump will meet soon in Helsinki.  At a time of uncertainty in the US-Russia relationship, the meeting is an important step forward in clarifying that relationship, one that should be not reduced to a Trump tweet or a Putin chess move. 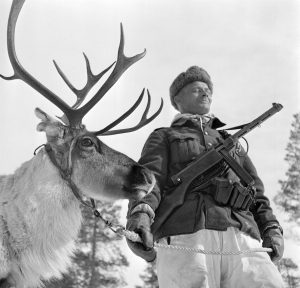 In World War II, Finnish troops used reindeer to haul supples over icy terrain where contemporary vehicles could not go.

Where it is being held is significant. Helsinki was part of the Russian empire for a century. It is now a century since the Finns have been independent, but always in the context of East-West realities. During the Cold War, “Finlandization” became a term of art for how smaller country could retain its independence on internal matters by bowing to a larger neighbor on international affairs.

Finland become independent as a result of World War I and the Russian revolution. If one visits Helsinki, the similarities to Saint Petersburg — just five hours away by car (or tank) — are obvious..  And in the wake of the Russian revolution, Finland had its own civil war, its own clash of “Whites” against the “Reds,” with legendary Finnish leader Carl Mannerheim commanding the German-backed Whites.

After withdrawing from Finnish politics, General Mannerheim would return to lead the fight in the famous “Winter War” against the invading Russians, who poured in more forces than the Western allies later did on D-Day. Amazingly, the Finns not only resisted but destroyed the initial forces which invaded Finland.  As the Western Alliance would fail to stop the Nazis, however, they would fail Finland as well. 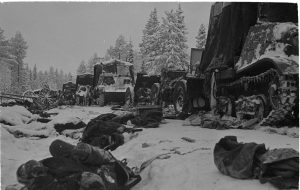 Dead Soviet invaders and abandoned vehicles during the 1940 invasion of Finland.

But the American leaders, working behind the scenes with Mannerheim and the Finnish leadership, de facto cut a deal with the Finns to not attack the supply lines coming through the North into Russia.  While the UK declared war on Finland, the US did not.  This was an enlightened move which provided flexibility for both the United States and Finland going forward. 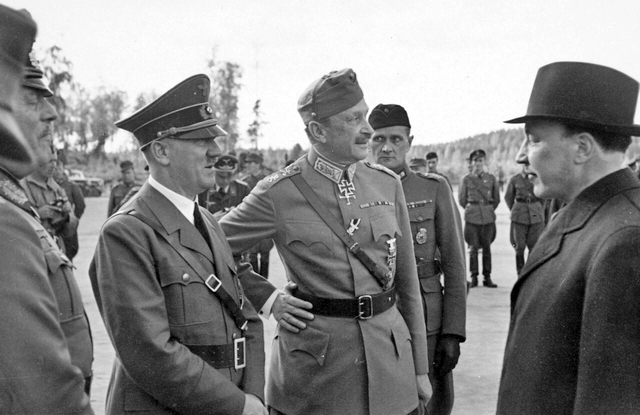 Finnish Field Marshal Carl Mannerheim, with mustache) with Adolf Hitler during the two countries’ uneasy alliance, which the Finns terminated in September 1944. The Finns had already undermined the Nazis by tacitly agreeing not to attack US supplies headed for Russia.

The letter which Mannerheim sent to Adolf Hitler when leaving the war in fall 1944 highlights a core principle important to Finns and to any nation worthy of calling itself a nation – emphasized the absolute imperative to preserve the Finnish people and the Finnish nation. It read in part: 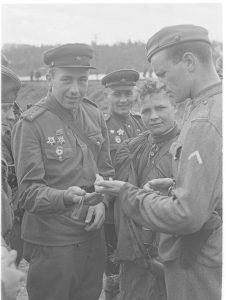 Russian soldiers (left) and Finnish ones (right) check their watches after the ceasefire in 1944.

“The Russian’s great assaults in June exhausted our reserves. We cannot expose ourselves to another such bloodletting without the whole future of the small Finnish nation being jeopardized.

“I wish specially to emphasize that Germany will live on even if fate should not crown your arms with victory. Nobody could give such assurance regarding Finland. If that nation of barely four million were militarily defeated, there can be little doubt that will be driven into exile or exterminated. I cannot expose my people to such a fate.”

It is clear that the Finns have not forgotten their history and are seeking today to protect themselves against the Russian actions in Europe.  To do so, they are pursuing a strong relationship with Europe through

What might President Putin learn from the Finns? Above all, stop threatening the Baltic States for all that does is drive the Finns and the Nordics into a closer relationship both with each other and with NATO.  The Russians complain about Finnish and Nordic action, but they have only themselves to thank. 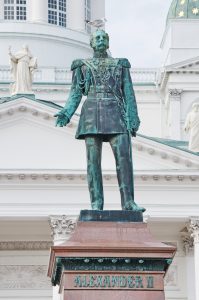 President Putin might stand in front of the famous statue to Alexander II in the center of Helsinki and remember the Finns erected it, not simply to remember an important reformer, but to protest the reactionary policies of his successor Alexander III.  The Russians cast a long shadow, and Putin may be trying to make Russia Great Again through old-fashioned hardball tactics, but it is at the expense of fundamental interests which could be better served by Russian reform and reworking his relationship with the West.

For his part, President Trump might reflect on his meeting with the Finnish President when he butchered his name, while the Finns did not care in their happiness that that their President met the US President.  He might learn from the Finns that European security is not simply Germany and defense spending percentages; it is about the professional working relationship among the militaries and how Western solidarity has been built despite political differences.  He might learn as well that for smaller countries, organizations like the European Union play an important role alongside NATO.

As the Finns consider how to augment their defense capabilities, it is important for President Trump to consider how a smaller nation looks at their strategic position. He would do well to learn from the subtler approach followed by Secretary Hall and President Roosevelt during World War II.

As I stood in front of the Finnish defense ministry this past February, I know what I learned looking at the very powerful statue honoring the Finnish people for their resistance to Stalin and his dictatorship: The Finns love their nation and will risk their lives to defend it. Both Putin and Trump need to remember that. 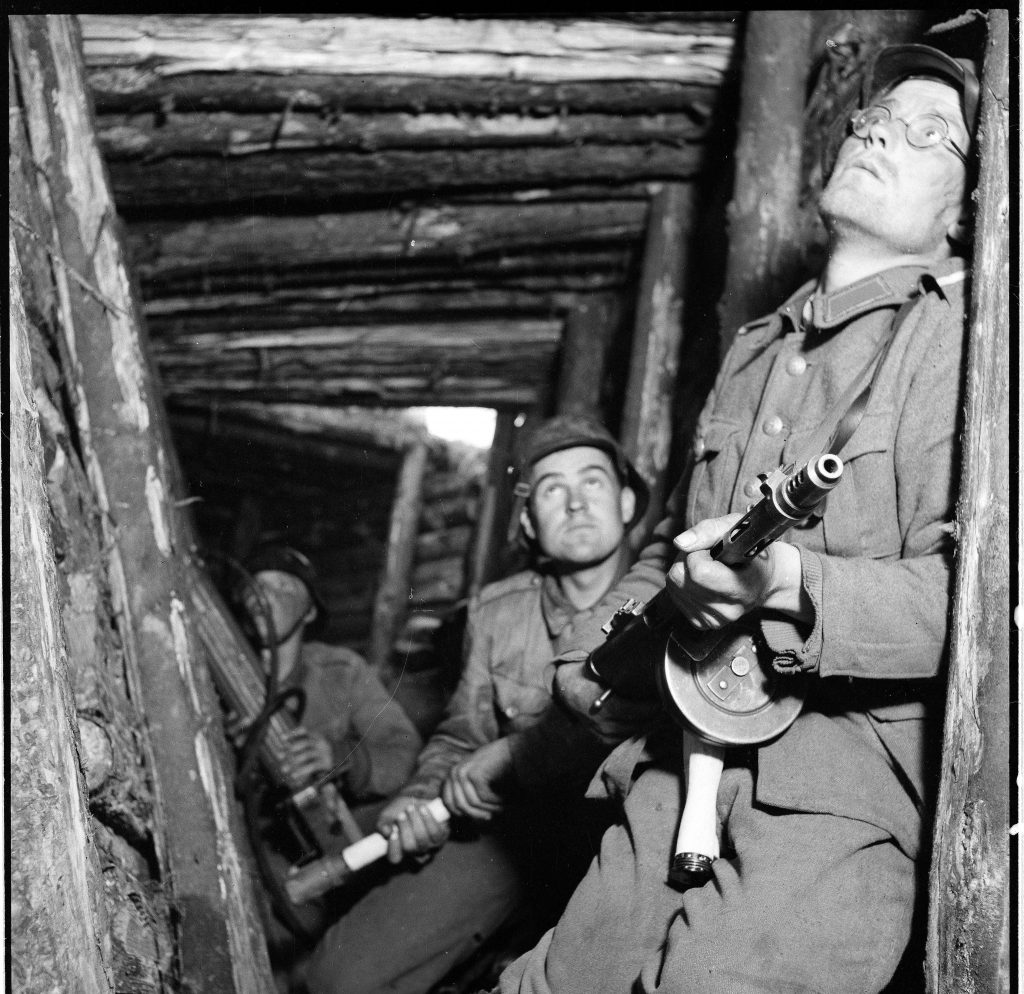