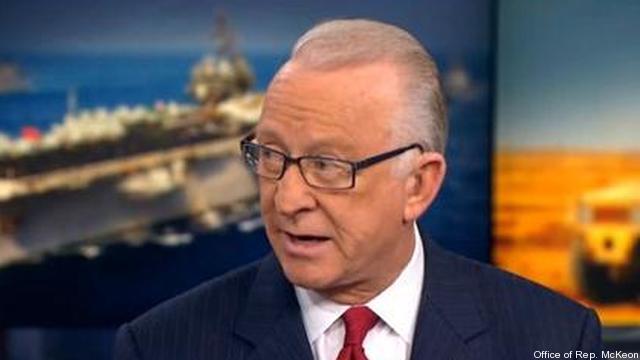 CAPITOL HILL: Tracking the winners and losers of this year’s House authorization markup — the draft bill produced by the House Armed Services Committee — is one of Washington’s most exhausitng pastimes.

The final bill often does not appear until 2 or 3 or 4 or 5 or even later in the morning the day after the full committee began to meet. While the bulk of the bill is usually known before the committee meets — thanks to greater transparency introduced by current chairman Rep. Buck McKeon — it is the amendments that make the bill such a chore to follow.

But those amendments are the greatest chance lobbyists and those they love get to protect their own interests and the policies they really care about. So you just need to get over it and try to stay awake through the whole thing.

Here are some tips on how best to follow the markup. Full committee meets June 5, a Wednesday, starting at 10 a.m. The committee staff have created a Twitter hash tag which they will use to broadcast every amendment they can get their hands on: #FY14NDAA. That should help, but members must still vote on each amendment that makes it through the Rules Committee vetting process.

We hear the committee really wants to wrap things up early this year, but I don’t think anyone holds out much hope. Let us know what your office pool results are. Also, we’ll set one up here at Breaking Defense. Pick the hour and minute at which you predict the final bill will get squeezed out of the sausage maker. The person closest to the exact time the full committee adjourns — before the hour will win a tie if two people pick 3:05 a.m. and 3:09 a.m. and it adjourns at 3:07 a.m. — will have their name and affiliation broadcast to the world via Twitter and our website. Earn eternal admiration from the thousands of Washington insiders whose lives are consumed by this bill!

My predictions on things likely to consume time in the bill’s debate:

There will be bunches of Tell Us The Truth About Benghazi amendments.

The issue of how and when and why and whether to shutter the terrorist detention facility at Guantanamo Bay will generate a decent amount of heat.

Tricare and other personnel issues will lead to a raft of discussions and amendments. Congress hates to cut benefits but sequestration makes this hard to avoid.

The Littoral Combat Ship will attract amendments in support and in opposition, given the system’s continuing difficulties.

Several large satellite programs may attract the interest of HASC members, including SBIRS and AEHF.

SSBN-X and the Virginia-class submarines may well attract policy or acquisition language.

The Army’s Ground Combat Vehicle is likely to attract what we can call guidance language given how heavy it looks to be. And the Army’s tank plant in Lima, Ohio — which HASC Tactical Air and Land Subcommittee chairman Rep. Mike Turner just visited — will attract language to keep it open.

The companies fighting to preserve the current shape of the Army’s radio acquisitions may well try again, given how heavily they’ve been lobbying HASC members.

Sadly for press folks like me there aren’t any really hot debates about defense programs boiling right now. In fact, I’m betting the F-35 will get off much more lightly than in recent years, given the general consensus that the program is in much better shape today. The program is likely to lose five to seven planes, but those are two years out.