Posted by Anonymous in Government on July 22, 2011

Sometimes — not very often, to be sure — someone in government feels so strongly that things are headed 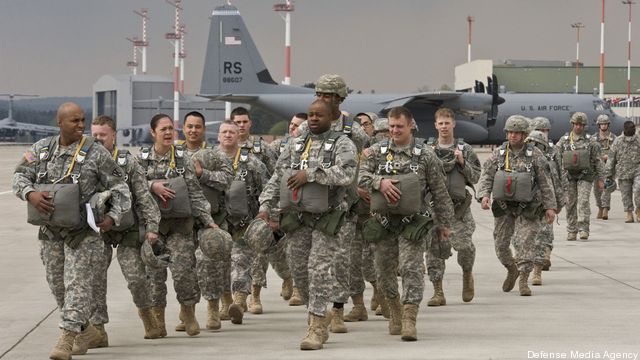 in the wrong direction that they feel compelled to break ranks and tell the American people. We have such a case here. Our author, who agreed to be identified only as ‘Anonymous in Government’, knows a great deal about the subject being addressed and harbors such a strong view that the senior Pentagon leadership is heading in the wrong direction that he contacted us in hopes of sharing his — or her — analysis. Given his — or her — knowledge and position, we make our forum available.

Instead of acting boldly to start saving what could be billions of dollars over the next few years, the committee added amendments restricting funds for the headquarters of Africa Command and another limiting funds for military construction projects in Germany, pending a report on the brigade combat team scheduled to be withdrawn from Germany in 2015. It marked the second time in as many months that Senate committees responsible for defense matters declined to act aggressively on a potential source of billions in savings. While the consensus is that defense spending is on the table, Congress is failing to capitalize on available opportunities overseas.

In its latest report on military construction appropriations, the Congressional Research Service punted, focusing its proposed “Questions for Congress” on peripheral matters — whether Congress’s failure to pass FY2011 appropriations disrupted planning and whether the probation on earmarks is an infringement on Congress’s power of the purse. Congressional Budget Office attention to military construction has been limited to observations included in its annual reports on the long-term implications of defense plans; in the latest 2010 study, CBO observations centered on funding to cover recapitalization rates, base realignment and closure, and family housing. Its last substantive report on overseas basing was issued in May 2004, when it examined options for changing Army’s overseas basing.

In the first half of 2011, the Government Accountability Office reported the future of European Command and Pacific Command plans are questionable because existing plans rarely include enough cost information and lacked analyses to determine their affordability. However, GAO declined to recommend any funding withholds or program terminations, instead proposing the Department provide more information or complete additional study.

Given the new-found receptivity to reducing DoD budgets, the congressional agencies should have been more definitive on potential courses of action.

Nonetheless, it’s unclear why Congress continues to persist in funding the Cold War’s multi-billion overseas presence, especially in Europe. The Senate Armed Services Committee declined to act, instead directing GAO to assess DoD’s assumptions concerning the cost of overseas posture compared to stationing forces in the United States. Similarly, the Senate Appropriations Military Construction subcommittee merely “question[ed] the wisdom of embarking on long range, multi-billion dollar global defense initiatives based on military construction cost estimates that are found to be ‘volatile and not comprehensive’,” and simply directed DoD to submit yet another round of reports explaining its objectives overseas.

Michele Flournoy, the current undersecretary for policy is responsible for DoD overseas basing and, right after the issuance of the 2010 Quadrennial Defense Review she indicated a comprehensive review of posture would be forthcoming by 2012. Since then, DoD has not issued formal findings and Flournoy has rarely commented substantively on the matter. Congress should be ready to grill the undersecretary about the administration’s “comprehensive review of roles and missions” and its global posture review.

In the meantime, Congressional leaders should, at the minimum, be pulling the trigger and withholding funding on these various “long range, multi-billion dollar” initiatives until the administration produces a plan revamping America’s foreign footprint. Ultimately, congressional inaction means we are leaving behind potentially billions of dollars in savings that could be harvested by drawing down foreign bases.