WASHINGTON: Despite reported differences, the House and Senate Armed Services Committees propose almost identical toplines for national security spending. In an apples to apples comparison, after correcting for discrepancies in what the two committees count, HASC’s total is $704 billion, SASC’s is $708. That’s a difference of just 0.6 percent, presenting a strong united front against Tea Party budget hawks and the Trump Administration, which proposed $668 billion. 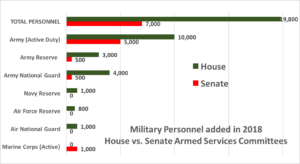 These figures include not only the Defense Department’s base budget but also Overseas Contingency Operations, mandatory spending, and spending at non-DoD agencies like the Energy Department. The committees confused the issue by counting differently. SASC’s official topline of $700 billion includes almost $8 billion of national security spending that’s in the jurisdiction of other committees, chiefly Intelligence, Homeland Security, and Foreign Relations; HASC’s $695.9 billion does not. HASC, for its part, counts $7.5 billion of mandatory spending; SASC cannot count an equivalent sum, because they’re still waiting an official CBO score — but it’s a safe assumption (which we made) that the figure will be nearly the same. 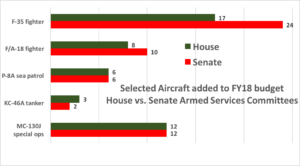 The same apples-to-apples problem applies even to Defense Department spending. HASC says they’re authorizing $593 billion for the DoD base budget, plus $65 billion in war funds called Overseas Contingency Operations, plus $10 billion in “OCO for base” — i.e. base budget activities funded under OCO as a legislative sleight of hand — for a total of $668 billion. SASC says they’re authorizing $611 billion for the base and $60 billion for OCO, totaling $671 billion. The Senate isn’t trying the OCO-for-base trick: To the contrary, they moved $5 billion to shore up NATO allies against Russia, the European Deterrence Initiative, from the OCO fund for the base budget. If the committees had used funding categories consistently — if you were to move the Senate’s deterrence money back to OCO and the House’s OCO-for-base into the base — then the Overseas Contingency Operations figures would be identical and the base budgets only $3 billion apart (HASC $603, SASC $606). 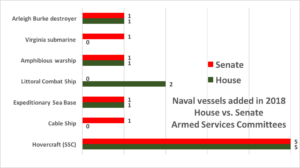 Overall, while the Senate side has not published their full bill, only a summary, the information we have so far suggests that SASC chairman John McCain and his HASC counterpart Mac Thornberry are closely aligned. On policy, the highest profile difference is probably the House plan for a Space Corps, split off as an independent service from the Air Force. On personnel, the Senate would add 7,000 troops across the services, while the House would add almost 20,000, an expensive difference as well as a steep challenge for recruiters.

On procurement, the two committees have many significant but hardly earth-shaking differences. The Senate wants a few more F-35 and F/A-18 fighters — McCain is a former fighter pilot — while the House has more Littoral Combat Ships — McCain dislikes LCS, like many old-school Navy officers. But then they coincide exactly on details like how many P-8A Poseidon naval reconnaissance planes to add to the administration request (six) and how many Ship-to-Shore Connector hovercraft to add (five).