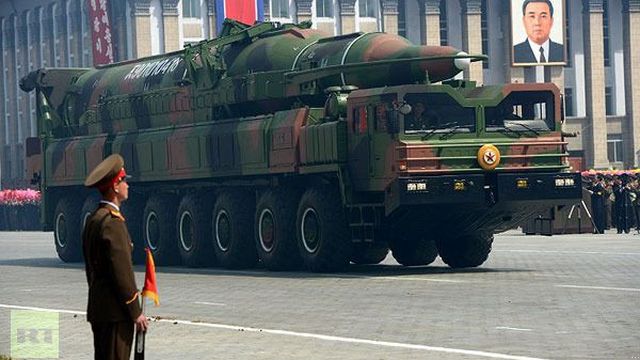 I had the privilege to study and work with Dr. Zbigniew Brzezinski as a student and for my first research job. With Brzezinski, one is always pushed towards the “Zbig” picture.

It was no different when I recently visited Brzezinski in his office and we settled down to discuss the current Korean crisis and the way ahead to deal with the crisis. One concern which I have had in watching both the discussions about and the policy reactions to the crisis is the implicit assumption that what is occurring now is simply a replay of what has happened earlier.

To put it simply, the historical patterns seems to be the following: North Korea saber rattles, and uses the crisis to generate a new flow of revenue from those states most threatened by the saber rattling.

This crisis is different.

With the Obama administration publicly committed to reducing the nuclear arsenal and providing precious little focus on expanding deterrent warfighting capabilities, do Japan and South Korea want to depend on the “Battle of Benghazi” President? It is clear that the current crisis is part of the learning process of the Second Nuclear Age as envisaged by Paul Bracken.

What those lessons are, what rules of the road are being developed we will know only when the current crisis has matured and receded. Brzezinski emphasized the need for airpower to hold at risk the artillery capabilities of North Korea threatening South Korea, as well as our ability to destroy delivery capabilities and being able to hold North Korea’s the leadership at risk. And he emphasized the importance of discussing with the Chinese at the highest level what we were prepared to do, and to make it crystal clear that we would not accept an outcome dictated by North Korean threats. We might even request Chinese help in identifying leadership targets.

The Chinese might well take this discussion forward by providing advice to North Korea and helping provide them with a solid dose of reality. It is important for the North Korean leadership to understand that the United States is not going to sit idly by and be blackmailed by North Korea. More importantly, they need to see that we are mobilizing the capacity to underscore the reality of this position.

From my perspective, recovering a credible understanding of how the United States can leverage air and sea power to conduct significant strikes on an adversary like North Korea is crucial to shaping positive outcomes in the Second Nuclear Age. Simply flying in a couple of B-2s and F-22s does not cut it. It is more a PR stunt than a deterrent warfighting strategy. What is needed is a ramp up of air and strike power integration and to build out from that integration effort over time the kind of attack and defense enterprise one will need for Pacific security and defense in the long haul.

By deploying high-end airpower — F-22s and B-2s to start with — and better integration of the carrier strike force with high-end airpower it will be possible to enhance the credibility of the deterrent power of an American strike force. Crucial to this as well will be the ability to integrate subsurface and surface strike capabilities, as well as target identification via various air-breathing and space-based means as part of an integrated strike and defense force.

The North Korean crisis is as far from Afghanistan as possible. This is not a slow motion war in which ground forces are the key. This is a fast paced crisis in which the invasion of North Korea is not the core deterrent force; the ability to destroy launch vehicles and to hold the leadership at risk is. The US Army is not a centerpiece of Pacific deterrence. As the crisis unfolds, winds down, or pauses, the Obama Administration and the Congress might consider budgetary actions which can immediately enhance the warfighting deterrent character of US forces.

We can re-enforce American deterrent capacity in the current crisis and build towards more effective 21st century at the same time. With the deployment of stealth aircraft — first the B-2s and then F-22s — Defense Secretary Chuck Hagel signaled that he clearly understood the importance of putting advanced US technology and capabilities up — the B-2 and the F-22 — against the problem.

Instead of being Cold War weapons, the question now asked of the F-22 was a different one: how many can you send? It is important to remember that all current 21st Century technology was built on the vision and commitment of bipartisan 20th Century politicians. We need a similar commitment now by Republicans and Democrats to band together and build the capabilities we need for the next two decades of the 21st century.

Robbin Laird, a member of the AOL Defense Board of Contributors, is an international defense consultant and owner of the Second Line of Defense website.