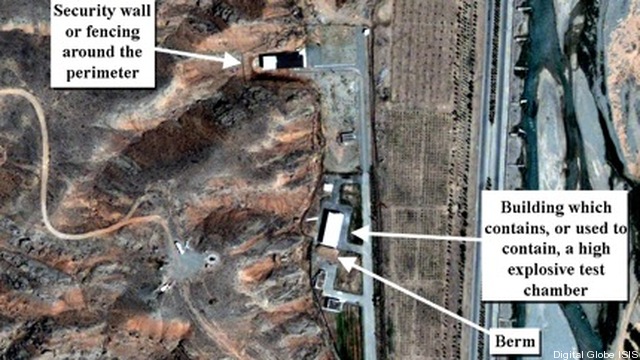 This shows Parchin, one of the Iranian sites controlled by their Defense Ministry.

Iran’s decision to accept and implement the nuclear deal struck in November has undercut the US Congress’s drive for new sanctions designed to increase the pressure on the Islamic Republic. President Barack Obama said the deal should be given a chance to work and that sanctions could alienate Iran and torpedo the diplomacy. Congress, so far, is listening.

The first blow to the move by some in Congress to impose new sanctions was Iran’s agreement to a start date for enforcing the interim agreement that freezes Iran’s nuclear program at its current level and rolls back higher levels of uranium enrichment. Then came the Monday start of enforcing the six-month interim agreement, known as the Joint Plan of Action. This was accompanied by a glowing UN report showing that Iran was doing what it was supposed to do. The final step is a long one. It requires a comprehensive agreement with Iran within the six-month negotiating period. Such a final accord would be designed to guarantee that Iran would have neither the means nor the leeway to make enough enriched uranium or plutonium for an atom bomb without the international community knowing what is happening and having time to  to react.

The report by the UN watchdog International Atomic Energy Agency (IAEA) said Monday that Iran was complying with the Joint Plan of Action struck in November at marathon, all-night talks in Geneva between six major powers and Iran. These powers, the so-called P5 plus 1, include the five permanent UN Security Council members, nuclear weapons nations the United States, Russia, China, Britain and France, plus Germany. https://breakingdefense.com/2013/11/iaea-chief-cites-modest-iran-nuclear-progress-official-report-due-exclusive/”>The IAEA report said that Iran had:

A key untouched matter is Iran’s research into advanced centrifuges which can enrich uranium more quickly than basic centrifuges. Iranian atomic energy chief Ali Akbar Salehi said Tuesday that Iran has developed centrifuges 15 times more powerful than the ones it is currently using. More efficient centrifuges would be a crucial factor in reducing Iran’s “break-out” time to make a bomb. The interim agreement does not limit this research. Iranian officials have been adamant the research continue. Salehi said in a televised interview on January 15 that Iran was able to override IAEA objections to Iranian work on a new generation of centrifuges. This surely plays to domestic politics as it would help mollify Tehran hardliners who are unhappy about their country’s new willingness to talk and to act. So the type of centrifuges Iran can have, and how many it will be allowed to operate, will be crucial points in the coming negotiations.

The two sides must also decide how stringent inspections of centrifuge workshops controlled by the Ministry of Defense will be. The workshops  have been off-limits to IAEA inspectors since Iran cut off access in 2006, when sanctions against Iran increased.

One Middle East expert told Breaking Defense: “This issue will face a significant test in the near future, when Iran will have to decide whether to enable inspectors to also enter component (rotor) production plants subordinate to the Iranian Defense Ministry industries. Denying the inspectors such access will enable the Iranians to continue making uninterrupted technological progress in the sphere of enrichment.”

In the past, Iran has claimed that such areas are off-limits under its safeguards agreement with the IAEA. Misunderstandings about what the interim agreement accomplishes and what a comprehensive agreement must accomplish have fed much of the calls for new sanctions against Iran. The interim agreement ismerely designed to keep the Iranians from advancing in their nuclear work while negotiations continue to impose greater and more permanent limitations on the country’s nuclear program. This seems to be working, keeping Iran to under 5 percent enrichment, the level needed to make fuel for civilian reactors.

The agreement also mandates that Iran must eliminate its stockpile of 20-percent enriched uranium and not increase its stockpile of 5 percent enriched uranium. In addition, Iran is not to increase the number of centrifuges doing the enriching, which currently is over 10,000. And they are not to feed uranium gas into the more than 1,000 more advanced centrifuges it has installed and which could enrich more efficiently and quickly than the models currently doing the work. Finally, the interim agreement does not require Iran answer IAEA questions about any military dimensions of its nuclear work. This will have to be dealt with in the negotiations to come.

Indeed, the bottom line for a final agreement will be a guarantee that Iran can not break out to make a nuclear weapon bomb. That will require limitations on almost all parts of Iran’s nuclear program as well as much more intrusive inspections and monitoring by the international community.

This time the situation does seem materially different, providing a strong argument that diplomacy should be given a grace period until we see how Iran acts.