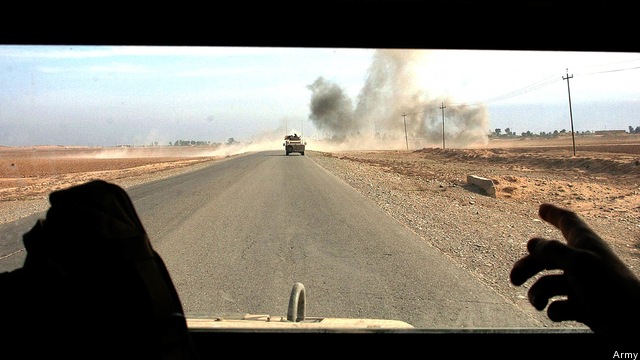 WASHINGTON: In almost every war of the modern era, artillery has played a decisive role. But the lowly IED, cobbled together explosives ignited by cobbled together detonators, has now replaced artillery as the greatest killer on the modern battlefield, according to Lt. Gen. Michael D. Barbero, head of the Joint IED Defeat Organization (JIEDDO)

The Army general in charge of the multi-billion-dollar effort said the IED was a “global and enduring threat” that the U.S. military would have to deal with long after it ends its combat involvement in Afghanistan, now slated for 2014.

Barbero noted that improvised explosives also are showing up in domestic settings. He cited the multitude of deadly explosive devices rigged to go off in the apartment of the gunman who killed 12 people and wounded 58 in Aurora, Colo., in July.

He mentioned the bomb planted by a terrorist in the truck of a car left in New York’s Times Square in 2010 and a long list of improvised explosives and suicide bomber attacks in Africa, Latin America and Europe.

In Afghanistan, Barbero said at a briefing held by the Atlantic Council, that IEDs caused 60 percent of the casualties suffered by U.S. and coalition forces. This past June recorded the highest number of “IED incidents” ever in the 11-year involvement in Afghanistan but the number of incidents on an annual basis have been dropping, he said.

The good news, the general said, was that the rate of IEDs being found and cleared before they explode is growing and the number of casualties is declining. That means the “effective rate” of the improvised weapons — those that cause casualties — this year is 55 percent less than last year, he said.

But that is not enough, he said, describing the fight against the crude but deadly IEDs as a constant cycle of responses to new types of devices or to new tactics. Because of that cycle, the general said JIEDDO’s most important feature was its ability to rapidly field new systems to counter the evolving threat.

Barbero, who has the authority to spend up to $25 million without having to go to Congress or higher command and can get rapid approval to spend more from Deputy Defense Secretary Ashton Carter, pointed to the fielding of thousands of sets of the ballistic underwear intended to reduce injuries to the groin and intestines on troops stepping on IEDs and small, throwable unmanned ground vehicles requested by Marines.

The protective garments were fielded in four months by adopting a British design, while the mini-robots took eight months to develop and field.

That ability to respond quickly must be preserved, he said. And he noted that JIEDDO is moving from land to sea in its efforts to address new areas of threats from improvised explosives. His office is funding several Navy programs aimed at countering underwater threats, including IEDs that might be attached to docked ships or to piers or planted on harbor bottoms. It also is supporting programs to detect swimmers trying to plant an explosive, as well as to find ways to counter swarms of small, fast motorboats, such as those being used by Iran’s Republican Guard Navy in the Persian Gulf.