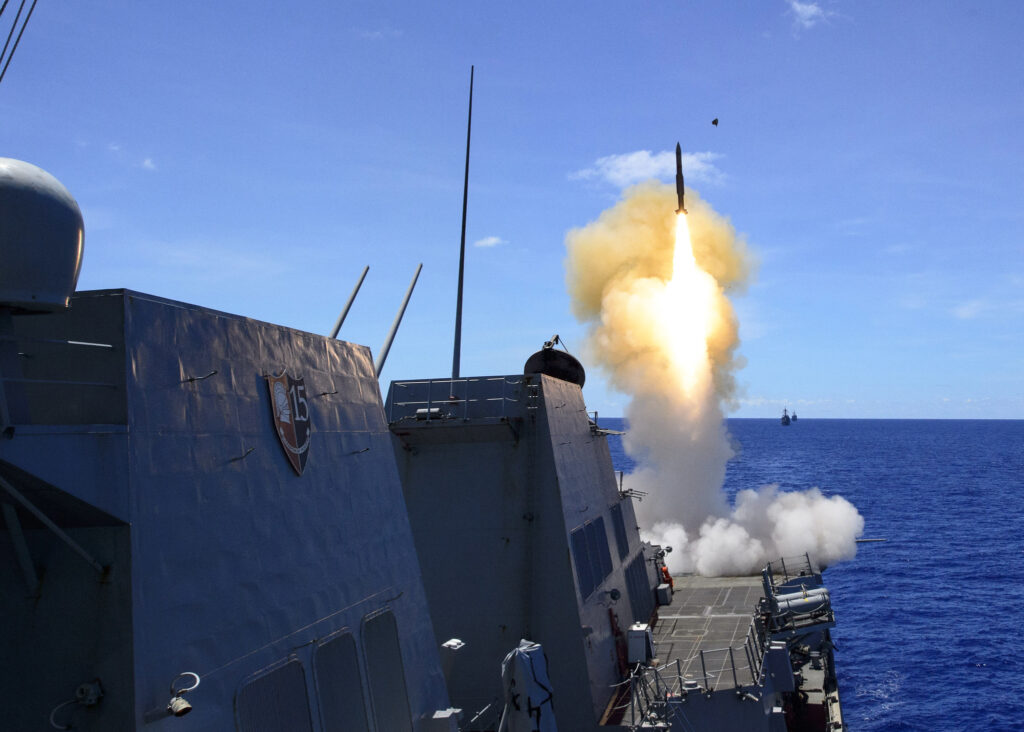 An SM 2 is launched from the aft missile deck of the USS Mustin.

WASHINGTON: If lawmakers can’t patch together a big budget deal to avoid a debt default and hold off billions in automatic spending cuts across the government, the Navy’s new frigate program could wind up being punted down the road, putting the service’s goal of a 355-ship fleet in jeopardy.

The Navy — which continues to struggle with readiness and maintenance issues — has moved quickly on its FFG(X) program in an effort to get the new class of ships into the water and make up for some of the deficiencies of the Littoral Combat Ship, which lacks both the offensive and defensive capabilities needed to meet the Pentagon’s new effort to confront China and Russia.

Congressman Rob Wittman said in an emailed statement that any delay in the FFG(X) program “would be absolutely unacceptable and is yet another example of how harmful CRs are for our military.” He pointed out that fiscal 2019 “was the first time in decades our service members received funding on time and the result has been a stronger military. I have constantly heard from top military leaders that CRs not only waste money, but are a broken promise and one more chip away at our service members’ ability to survive.”

But with the two houses of Congress bitterly divided and an unclear path forward on defense spending, there’s a possibility that a full year continuing resolution could throw a wrench into those plans.

“If you’ve got a full year CR that’s the worst case scenario,” one congressional staffer told me.

The FFG(X) program is slated to see a contract award in 2020. Under a full year CR, that would have to be pushed back until 2021 — at the earliest. A three-month CR, which has been handed down before by Congress, wouldn’t be likely to affect the program’s schedule, because the Navy plans to award a contract in the fourth quarter of fiscal 2020.

While that award date might be an accident, it also could reflect lessons learned at the Pentagon over how to work through — or around — Capitol Hill’s inability to pass budgets on time.

One way to mitigate a CR “is to not schedule critical contracting actions in the first part of a fiscal year,” a second congressional staffer told me. “DoD has learned that a CR is a possibility, so they try to schedule critical contracting actions away from the first quarter of the fiscal year. But by doing this you’re running a risk of sending a message to Congress that it’s OK to have a CR because the DoD has figured out how to live with them.”

Testifying before the Senate Armed Services Committee on Tuesday, presumptive Defense Secretary Mark Esper outlined the impact of CRs. “Every day that a CR continues is one less day we can invest in future capabilities and technologies,” he said, “and we’re stuck funding legacy technologies and legacy equipment.”

Just last month, the Navy released an RFP to industry to submit designs for the first of 20 guided-missile frigates. The first to be procured would be in 2020, and funded at a rate of two per year between 2021 and 2029. The first ship is slated to cost $1.2 billion, with the remaining 19 hulls coming in at about $900 million each.

That compressed schedule is possible, the Navy says, because it’s asking shipbuilders to use existing hull designs and mature technologies in their proposals, setting up a situation where a foreign-designed ship could be chosen, while still being built in the United States.

At the moment, four industry teams are competing for the FFG(X) program, including two that plan to build at shipyards that have been churning out Littoral Combat Ships (which the frigate is slated in part to replace.) Four companies have said they would submit bids for the contract award expected to take place next July: Austal, Fincantieri/Marinette Marine, General Dynamics, and Huntington Ingalls.

The plan is for the FFG(X) to play a variety of roles from hunting submarines and mines to providing air defense and strike capabilities that are beyond the scope of the Littoral Combat Ship, whose production has been sharply curtailed. The new frigates, according to Navy plans, will sport at least 32 Mark 41 Vertical Launch System capable of firing SM 2 Block IIIC surface-to-air missiles, Tomahawk and Evolved SeaSparrow Missiles.

The Navy also wants its shipmakers to: build in space, weight and cooling for eight to 16 Naval Strike Missiles, which have a range of 100 nautical miles; carry an MH-60R Seahawk helicopter and an MQ-8C Firescout drone; house a 150-kilowatt laser some day.

The frigate will almost certainly be larger than LCS variants. It will also be more heavily armored and survivable so it can better cope with more advanced Chinese and Russian ships and surface attack weapons. The FFG(X) is also being designed to operate either independently or within a carrier strike group, while acting as a distributed node in a sensor network.

How soon all that happens is bound up with the larger budget battles happening in Washington.