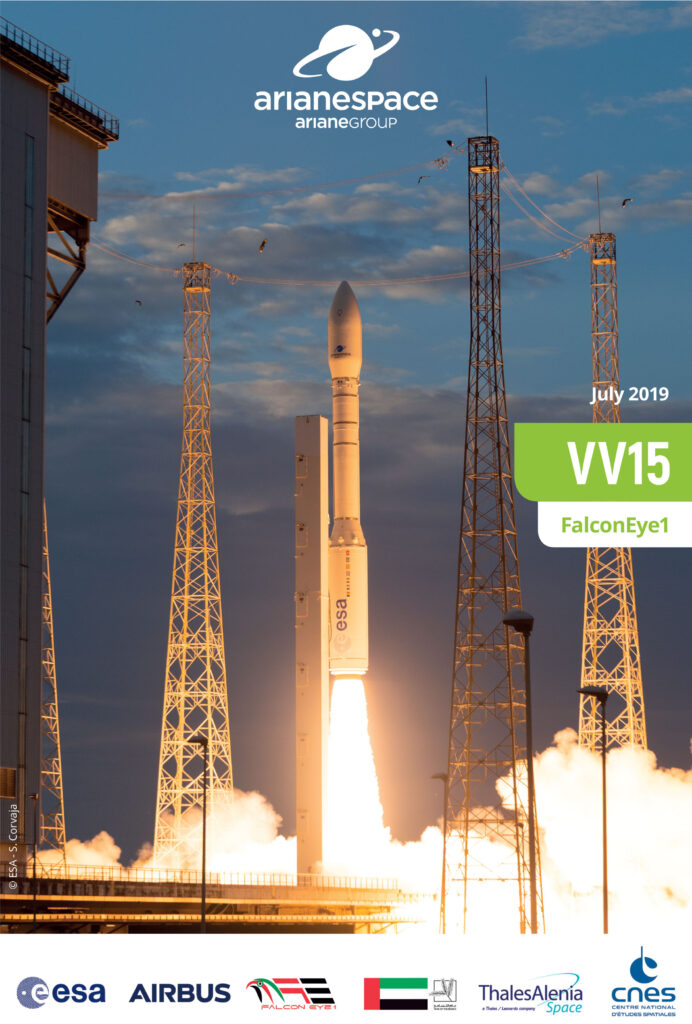 UPDATE: The Falcon Eye 1 satellite was destroyed in the Vega rocket’s first failure in 15 launches last night. The rocket — the launch of which was aired by the company in an awkward live broadcast — suffered a “major malfunction” at engine ignition, according to Arianespace, but the company offered no details.

TEL AVIV: The UAE’s long-delayed Falcon Eye 1 earth observation satellite is now expected to launch on July 9 (about 10 pm EDT), providing their military with improved reconnaissance capability. Israeli intelligence agencies are keeping a close eye on the program, according to experts here.

While dual-use, the high-resolution satellite — the first of two produced for UAE by French partners Airbus Defence and Space (manufacturing) and Thales Alenia Space (optics) under a 2013 contract worth 800 million Euro (about $1 billion in 2013 dollars) — was bought with military requirements specifically in mind,  experts say. The Falcon Eye satellites have a resolution of 0.7 meters. Arianespace is launching the satellite from French Guiana on its Vega rocket, after about a year’s delay caused in part by dickering between UAE and France over how to handle export of some components governed by US International Traffic in Arms Regulations (ITAR). The Falcon Eye 1 will be the fourth Low Earth Orbit (LEO) imaging satellite launched for UAE, including the domestically produced KhalifaSat lofted in 2018.

The United Arab Emirates has been positioning itself for the past five years  as the Arab state leader in space. In March, it launched a sweeping National Space Strategy 2030 laying out a framework for both industry ad government space activities, in-country research and international partnerships. According to a government press release, the strategy “includes 36 objectives and 119 initiatives.” The Emirates Space Agency, founded in 2014, is leading implementation of the strategy. UAE’s first astronaut, Hazza Al Mansouri, is expected to launch to the International Space Station in September. NASA and the Emirates Space Agency signed a cooperation agreement in 2018.

UAE also led the charge in the creation of the 11-member Arab Space Cooperation Group, announced in March at the Abu Dhabi Global Space Congress. That group includes, along with UAE, Saudi Arabia, Bahrain, Oman, Egypt, Algeria, Morocco, Jordan, Lebanon, Sudan and Kuwait.The group has begun work on a climate monitoring satellite dubbed 813, with a goal of launching in 2022.

“The UAE’s intention is to become a hub in this field,” said Yoel Guzansky, senior researcher at Israel’s Institute for National Security Studies (INSS). “The federation, which has invested approximately $6 billion in space R&D, has already launched into space several satellites, some of them developed independently.”

Saudi Arabia also has space ambitions, but less is publicly known about the kingdom’s activities, said one regional space expert. “Saudi is essentially a black box for everyone,” he said.

Saudi Arabia in 2018 launched two imaging satellites on a Chinese rocket. It  has space agreements with China, Ukraine, Russia and Kazakhstan.

“Saudi Arabia is not progressing in the field as rapidly as the UAE,” says Guzansky.

Israel keeps a close eye on Arab country space developments, and while some Israeli observers are uncomfortable with the idea of regional competition with the wealthy Arab states, up to now space actually is an area where there is little real friction. Israel has its own wide-ranging space program, including launch capabilities and cutting edge research programs such as on nanosatellites for missile defense.

Tal Inbar, senior space analyst at the Space Research Center of the Fisher Institute for Air and Space Strategic Studies, says that Arab space initiatives pose no threat at the moment. He notes, for example, that other countries such as Egypt and Morocco have for some time been operating high-resolution remote sensing satellites.

Indeed, Morocco’s imaging satellites, like the UAE Falcon Eye sats, are based on the Airbus/Thales Pleiades satellites and were purchased from the French coalition.

Inbar added, however, that some countries do have greater aspirations in the military space domain. For example, Saudi Arabia has shown some interest in developing its own launch vehicles. “Future initiatives such as development of satellite launch vehicles will be of significant strategic importance,” he explained.

The regional space analyst pointed out that UAE, Saudi and other Arab states actually buy Israeli satellite imagery via intermediaries — and Israel is well aware of that. He noted that rather than being aimed at Israel, the primarily security rationale for Arab nation space-based reconnaissance is focused on Iran’s activities in the region.

Above all there is an economic driver for the oil-rich states, he explained. “There is an urgent recognition that the Gulf economies have to economically diversify and space development is seen as one avenue to do so.”

Guzansky agrees, noting that several Gulf states benefit from cooperation with Israel. Still, he said, “the Arab world increasingly perceives space through the prism of security, which, in the long term, may pose a challenge to Israel. Israel needs to evaluate when and how the combination of the above-mentioned Arab space motivations and the vast resources put into play may challenge its security.”