‘It’s Time To Wake Up’: Sen. McCain At Naval Academy 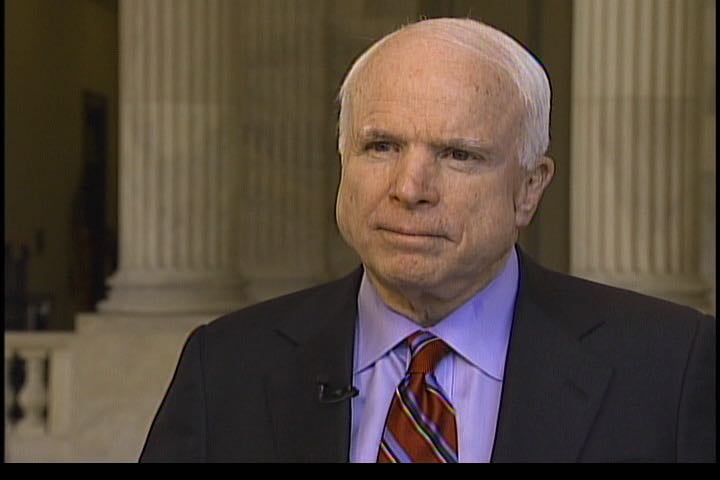 A clarion call. Our readers (being wise and smart) know what that means. Sen. John McCain issued one last night in a speech to the next generation of naval leaders at Annapolis. McCain’s words are aimed straight at the heart of the Republican Party and of our country: “We have to fight. We have to fight against propaganda and crackpot conspiracy theories. We have to fight isolationism, protectionism, and nativism. We have to defeat those who would worsen our divisions. We have to remind our sons and daughters that we became the most powerful nation on earth by tearing down walls, not building them.”

As he faces death again, the senator has clearly decided he will not go gentle into that good night, but will, as he says in his speech, fight. He has to. Watch the video below, to see the senator’s passion and to witness the winter of a Senate lion. Here is McCain’s speech. Read on! The Editor.

“And thank you to the Brigade of Midshipmen. Yes, I was once one of you. Six decades ago – in the age of sail – I was an undistinguished member of the Class of 1958. My superiors didn’t hold me in very high esteem in those days. Their disapproval was measured in the hundreds of miles of extra duty I marched in my time here. To be honest, I wasn’t too thrilled to be here back then, and I was as relieved to graduate – fifth from the bottom of my class – as the Naval Academy was to see me go.

“I wasn’t the first or last midshipman to have had a complicated relationship with this place. But I realized a little later in life that I had underestimated the effectiveness of my education here. I hadn’t fully appreciated all that the Academy was trying to teach me.

“We were all electrical engineering majors in those days. I doubt I would have made a very good one. But the Academy taught other lessons, which I would find later, when I needed them most, had somehow managed to stick. Lessons about sacrificing for something more important than yourself. Lessons about courage and humility. About friendship. About the meaning and responsibilities of honor.

“My appreciation for those lessons and for the friendships I made here bring me back often. So does my gratitude for the life of adventure the Naval Academy prepared me for, and for the privilege of being a bit player in the story of America that the Navy made possible.

“I grew up in eventful times and I’ve served in eventful times. I’ve seen America become a more just and prosperous country, coming ever closer to the ideals set down by our Founders. I’ve seen America organize and lead an international order based on liberty, mutual security, free markets, and the rule of law that liberated millions upon millions from tyranny and poverty. But we need only look back upon my own lifetime to understand how hard-fought those victories were.

“I was born in 1936. In February of that year, German troops reoccupied the Rhineland and Europe’s war-weary democracies failed to respond. In March, a radical militarist prime minister was appointed in Japan. In May, Fascist Italy annexed Ethiopia, and in June – adding insult to injury – Germany’s Max Schmeling knocked out Joe Louis in the 12th round of their bout in Yankee Stadium.

“In July, Franco’s forces from North Africa landed in Spain and the Spanish Civil War began.  In August, the summer Olympics took place in Berlin, and although we Americans remember those games for the stirring achievements of Jesse Owens at the time they were understood as a symbol of Germany’s resurgence and by some – as a vindication of Hitler’s leadership. Fascism, we were told, might be the wave of the future.

“That same month the Soviet government began its infamous show trials of former Bolshevik leaders and many observers saw Stalin’s sham justice as a necessary step in the consolidation of a socialist alternative to Depression-era democracy. Another wave of violent purges soon followed and again found its apologists while claiming the lives of hundreds of thousands.

“The world was soon engulfed in another world war. The human, economic and spiritual toll of that conflict remains incalculable to this day. 682 Naval Academy graduates gave their lives in the struggle against Nazi Germany, Italy, and Japan. This is a tragic but comprehendible loss. But what are we to make of a number like 60 million war dead? Of the hundreds of thousands of villages and cities destroyed, and the untold resources spent that might have been put to humane and productive use had our enemies not embraced their ideologies of conquest and domination? How do we make sense of the human capacity for such evil? After Auschwitz, mankind looked different.

“And yet the generation of leaders that brought the democratic powers through the storm of that war did not succumb to despair. Their sense of responsibility and history demanded they build new institutions dedicated to the prevention of another global calamity, which they did with remarkable vision and persistence.

“First: that tyranny is always a threat to peace because it is an affront to all humanity’s natural desire for freedom.

“Second: that liberal institutions are nevertheless fragile, and must be affirmed with conviction at home and abroad.

“Third: that the American example and American leadership are indispensable to securing a peaceful and prosperous future. Our failure to remain engaged in Europe and enforce the hard-won peace of 1918 had made that clear. There could be no more isolationism, no more tired resignation – no more ‘America First.’

“Fascism was defeated in 1945. Communism eventually succumbed after a long and costly Cold War. Containment, often through military means, was vitally important, but ultimately communism collapsed because Soviet tyranny could not meet the basic spiritual and material needs of its terrorized subjects, while the American example brought unprecedented happiness and prosperity to millions of ordinary people.

“As we wrestled to overcome injustices in our society, the Soviet system ossified and was sustained only by its propaganda and secret police. It couldn’t prevail in the global struggle for hearts and minds. Ronald Reagan understood this and had the moral confidence to affirm America’s commitment to the spread of democracy.

“President George H.W. Bush handled the collapse of communism in Europe with consummate skill. Under his stewardship, the basis for a lasting post-Cold War order was firmly established – a renewal of the liberal framework for international cooperation that we and our allies had erected in 1945.

“Who could have imagined in the depths of the Cold War that a collapsing Soviet Union – still a nuclear super power – would peacefully accede to the reunification of Germany, or to the independence of all of its satellite states? And yet it happened.

“But the contrast between the hopeful atmosphere of 1991 and the current circumstances of our world is a stark one. We have gone from an interval when the global success of democracy seemed assured to a time in which the seductions of authoritarian rule find favor with many; when self-interested leadership excuses naked aggression with weak rationalizations; when ethnic grievances haunt the old and religious fanaticism fires the minds of the misguided young.

“How did we end up here? Why do many Americans ignore our moral and historical knowledge and seek escape from the world we’ve led so successfully?

“There are many wise answers to those questions. My own is: we are asleep to the necessity of our leadership, and to the opportunities and real dangers of this world. We are asleep in our echo chambers, where our views are always affirmed and information that contradicts them is always fake. We are asleep in our polarized politics, which exaggerates our differences, looks for scapegoats instead of answers, and insists we get all our way all the time from a system of government based on compromise, principled cooperation and restraint.

“All the while the associations, rules, values and aspirations that comprise the international order we have superintended for three-quarters of a century are under gathering attack from regimes that desire a world less just and less free and more corrupt. And they are under attack from forces within liberal democracies themselves, parties that preach resentful nationalism rather than enlightened self-interest, nativism rather than equal justice.

“I believe in Americans. We’re capable of better. I’ve seen it. We’re hopeful, compassionate people. And we still have leaders who will uphold the values that made America great, and a beacon to the oppressed.

“But that isn’t your job. Not directly. It belongs to those of us who hold office and are responsible for making sure you’re sent where you’re needed and equipped and ready for your missions.

“You will be asked to defend America’s interests overseas, and thereby to defend the ideals that encompass and transcend those interests. You will protect the international order that American politics, with all its inefficiencies and human frailties, has done so much to create.

“I know that because I’m not the only McCain to have been prepared for that duty by the traditions and values imparted to me here and by the example of other better Americans who walked through these gates. My father was here, and his father before him. Like me, their standing was closer to the bottom than the top of their class.

“My son, Jack, is the non-conformist in the family. He managed to reach the upper half of his class, even to be a midshipman officer. But his forbears, though less accomplished midshipmen, nevertheless left here to devote the rest of their lives to our country, in war and peace, good times and bad. And each of us considered himself to be the luckiest man on earth.

“I know what you will risk and what you will receive in return. I know America is lucky to have you, and that you will think yourselves lucky to serve America. Even in the worst of times – and they come for most of us – you’ll know that to serve this country is to serve its ideals – the ideals that consider every child on earth as made in the image of God and endowed with dignity and the rights to life, liberty and the pursuit of happiness. It is a noble cause. It is your cause, and it’s worth living and dying for.

“I have, sometimes unwittingly and often imperfectly, served that cause all my adult life. Like your service, mine began here in this place of honor and honor’s demands. I arrived a rebel without a cause, and left much the same. But I would discover that a sense of honor had been imparted to me here that would speak to me in the darkest hours.

“And so I come back, again and again, to the place where I learned to dread dishonor and from where I embarked on an eventful life, in good company, in the service of my country and its great cause.

“May your lives be as lucky as mine. Godspeed. Semper Fidelis. Fair winds and following seas.”