WASHINGTON: Eight senators sent a letter Friday to Defense Secretary James Mattis, urging him to request all three Littoral Combat Ships originally planned for the 2018 budget. While eight percent of the Senate may seem small, the bipartisan co-signers — four Republicans, four Democrats — include five members of the appropriating and authorizing and  committees for defense. Most notable among them is senior Alabama Senator Richard Shelby, who also chairs the Senate rules committee. 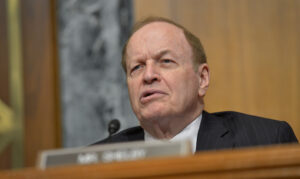 Smaller and more fragile than traditional destroyers, the Littoral Combat Ship has been controversial since its inception, and it frequently takes a shellacking in congressional hearings. But it’s long had strong support in Alabama, where Austral builds the triple-hulled Independence variant, as well as in Wisconsin, where Marinette Marine makes the single-hulled Freedom. Now the program is at a turning point, with the Navy itself acknowledging it needs an upgunned ship and is setting up a competition between Austal and Marinette to build what it calls a frigate, essentially a better-armed but less versatile LCS. Congress’s investigative arm, the GAO, argues the program isn’t ready for the transition to frigates, while some prominent outside observers argue the LCS should be cancelled altogether in favor of an all-new ship.

In this moment of uncertainty, LCS backers want to make sure it preserves its share of the budget. That means three of the small vessels in 2018 — potentially with subsequent contract modifications to make them frigates instead of vanilla LCS.

The eight signatories include four Republicans:

Joint Letter to Mattis Final SIGNED by BreakingDefense on Scribd