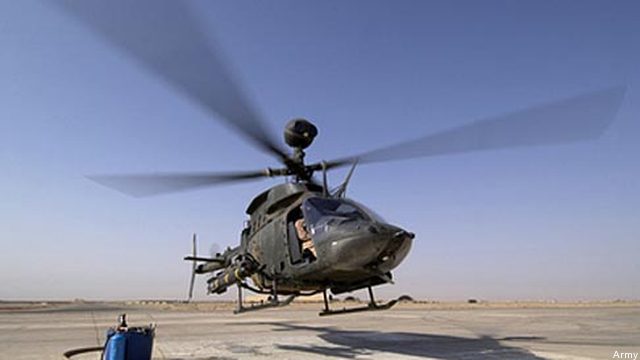 COLUMBUS, MISS: You can’t blame industry for being a bit wary about the Army’s third attempt to get its Kiowa replacement program off the ground. First there was the Comanche. Then the Armed Reconnaissance Helicopter. Now there’s the Armed Aerial Scout.

But this time, competitors know how high the stakes are for the Army on AAS. They also know how quickly powerpoint designs and cost estimates can fall apart once work begins.

“Everybody’s got [their] eyes wide open,” on the AAS program, according to EADS North America Chairman and CEO Sean O’Keefe. “This is not a sure thing,” he told reporters yesterday, en route to an event commemorating the company’s 200th UH-72A at its facility here. The Lakota is company’s proposed rotorcraft for the coming AAS competition.

Army aviation leaders plan to hold tryouts for the various defense firms vying for the helicopter deal within the next few months. These tryouts will consist of live-flight “evaluations” of the various helicopters being pitched for the program. But service leaders, including Army air chief Maj. Gen. Tim Crosby, are quick to point out these evaluations are not “fly-offs” to determine which helicopter will become the AAS. The tests are just a chance for Army leaders to see what industry has been developing and how far that work as come along. More specifically, service leaders want industry to prove it can build a new helo with commercial, off-the-shelf technologies that can do 80 percent of what the Kiowa Warrior — the Army’s current armed recon helo — can do.

These “measured [and] precise steps” should be enough to keep AAS costs and requirements from spiraling out of control the way the Comanche and ARH did, O’Keefe said. The capabilities on both helos “were amazing [but] we were at war,” Crosby said shortly after the EADS event here. Service couldn’t afford to finish either helicopter while continuing to finance war effort. With this new focused strategy, coupled with the U.S. withdrawal Iraq, could improve the Army’s chances to get an attack recon helo into the fleet. But the Army is hedging their bets on AAS in their budget proposal sent to Congress last month. The Army is pouring $376 million in base spending and war funds to upgrade the Kiowa, beginning in fiscal 2013.

When asked for his assessment on whether the Army can stick to their guns on AAS, or if this could end up as another service failure to replace the aging Kiowa, the EADS chief was cautiously optimistic. “We are taking them at their word, until proven otherwise,” O’Keefe said about the AAS strategy. “They get the benefit of the doubt, until they give me reason not to.” That said, “we are ready to show up,” he added.