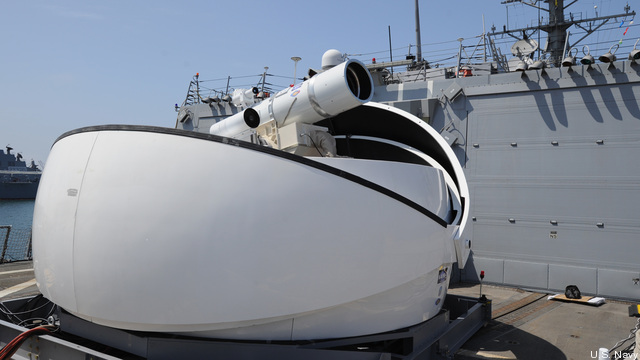 CAPITOL HILL: Lasers that can shoot down incoming missiles have been a work in progress since Ronald Reagan’s “Star Wars” days. Now, the Army and Navy not only have working demonstration models but ambitions to field real-world weapons circa 2021. This time, insisted Pentagon science advisor Howard Meyer this morning, it’s really going to happen.

Why so confident? I asked Meyer, himself a veteran of the Airborne Laser program cancelled in 2012, after his remarks to a small Marshall Institute seminar in the Congressional Visitor’s center this morning. The differences are both tactical and technological, he told me. Not only have lasers gotten better, the military’s expectations have gotten lower — and the urgency of the threat has gotten higher.

Technologically, as in so many other areas, commercial industry is leading the way: “I can buy lasers for welding, for cutting, [etc.],” Meyer told me. “There are thousands of these systems out in industry applications all over the world.”

In fact, the Navy’s “laser weapon system” (LaWS) is basically just six commercial welding lasers “strapped together,” Congressional Research Service analyst Ronald O’Rourke had noted earlier at the event. The six lasers don’t even cohere into a single beam, he said, they just “converge at the target.” The simplicity of that approach, O’Rourke argued, is what has allowed the Navy to advance LaWS quickly and affordably to the point that, this summer, it will head to the Persian Gulf for at-sea tests.

LaWS also embodies the more modest and yet more urgent missions the military now envisions for lasers. Reagan’s Strategic Defense Initiative envisioned a belt of satellites to shoot down Soviet warheads in space. The enormous flying airborne laser focused on shooting down a few ballistic missiles — say, a North Korean strike — shortly after launch, when warhead and rocket booster are still attached in one large, combustible target. The ABL technology actually worked, said Meyer, but the equipment and chemical power supply filled a converted 747, and the military felt the vulnerable aircraft would be easily shot down before it got into laser range.

By contrast, both the Navy LaWS and the Army’s “mobile high-energy laser demonstrator” are relatively small solid-state lasers, able to fit on a ship and a truck respectively. They’re also designed to fire over relatively short distances at targets much slower and less durable than a ballistic missile, targets such as small drones, fast-attack boats, precision-guided mortar rounds, tactical rockets, or — at the high end — anti-ship cruise missiles. Iran and its proxy Hezbollah have most of these weapons already and are working on the others, and many expects predict cheap precision-guided weapons will proliferate worldwide in the near future.

Meyer agrees. In future conflicts, “I am going to have mortar rounds or cruise missiles or UAVs coming in,” he told me. “We will be absorbing G-RAMM [guided rockets, artillery, mortars, and missiles]. We either have to take it out or we have to suffer the losses.”

That’s the urgent but achievable mission driving the Army and Navy programs. The shipboard LaWS generates just 33 kilowatts of laser energy and still manages to shoot down slow-moving drones in tests; the Navy wants to build a follow-up model generating roughly 60 to 100 kw, potentially mounted on the small Littoral Combat Ship or the mid-sized Arleigh Burke destroyer. The Army, meanwhile, is looking at laser defense platoons with either three 100-kw lasers mounted on large trucks or five 50-kw lasers mounted on smaller Stryker armored vehicles.

These power levels can take out cruise missiles, drones, and manned aircraft at ranges of a few miles. Longer ranges would require hundreds of kilowatts, however, and killing a ballistic missile in boost phase would take about a thousand kilowatts — one megawatt or more. An ICBM warhead, designed to survive the heat of reentry, is practically laser-proof.

So the lasers likely to be fielded in the early 2020s will be modest self-defense systems, one part of a larger array of countermeasures ranging from Patriot-style anti-missile missiles to electronic jamming, cyberwarfare, and simple preemptive strikes. “Directed energy is a complement to existing kinetic capabilities,” Meyer emphasized to the Marshall Institute audience. “These are not replacement capabilities.

Precisely because they’re not supposed to be superweapons, however, they’re also more achievable. Speaking alongside Meyer this morning was the Center for Strategic and Budgetary Assessment’s Mark Gunzinger, whose 2012 report advocating defensive lasers helped jump-start high-level interest. Since then, Gunzinger told the group, both the Army and Navy have started official technology maturation and demonstration programs aimed at initial operational capability in the 2020-2022 range. (“In the Air Force, they still don’t have much other than basic research,” Gunzinger said — a fact Meyer attributed to the challenges of cramming lasers into an aircraft). But the problem with the Army and Navy demonstration effort, said Gunzinger, is that “we really don’t have a program to transition that to a full program of record,” something the military officially and formally has declared its intent to buy. It’s very difficult to buy more than a couple of systems unless you’ve established a program of record with its own line items in the budget.

When Gunzinger and his CSBA colleagues started exploring laser weaponry three years ago, he said, they expected that technological problems would be the major limiting factor: “We came out of that study saying, mmm, it really might be more [about] resources.” And given the current pressure on the defense budget, resources are just going to get tighter.