CAMERI AIR BASE, Italy: The Italians have been significant innovators since the beginning of the airpower era and they continue to innovate with the launch of the F-35. Their facilities here provide support not only for Italian aircraft, but mark the start of an ability to support an allied F-35 fleet operating in the Mediterranean and the Middle East.

The innovation does not stop there.  It is inherent in the Italian thinking about the concepts of operations of the F-35 and its contribution to Italian defense and security. Lt. General Pasquale Preziosa, the Italian Air Force Chief of Staff, underscored that the Italian Air Force will be deploying a mixed fleet of F-35s (As and Bs) because they believe that they need to deploy to the mission and not to the airfield.  This anticipates the kind of learning the U.S. Air Force and U.S. Marine Corps will shape as they deploy As and Bs to Japan starting in 2015.

I recently visited the Cameri facility. With the Japanese about to announce their own F-35 manufacturing facility, one can see clear implications for the F-35 as a global program. Indeed, there are a number of lessons learned at Cameri which affect the entire future of the F-35 program and its roll out in the Pacific as well.

Although an assembly facility, the facility’s real strength is it ability to support F-35s operating throughout Europe, the Mediterranean and the Middle East. The central lesson which comes from the standup of this facility is that shaping operational support for the F-35 fleet is a core business for allies as they acquire their planes and shape the fleet in their region.

If one looks at the usual photo of the facility, one sees an overhead shot of the Final Assembly and Check Out or FACO facility.  If this is what you have seen, you are not prepared for what you will experience should you come to the campus. 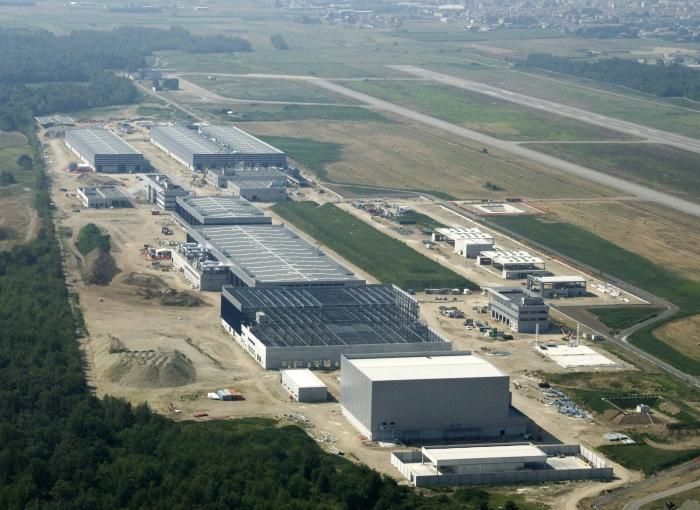 The Italians have built a 22-building F-35 campus, with more than one million square feet of covered work areas. It will include a final paint facility for the F-35 as well as the only ATF (Acceptance Test Facility for verifying the F-35 radar signature) in Europe.

The facility is operated by Alenia Aermacchi (AAeM). It will handle three broad tasks. The first includes final assembly of the Italian F-35As and Bs; the first jet is being currently worked on.  The second task occurs in a wing assembly facility where the Italians will produce at least 835 wings for the airplane.

The third is really a laydown for the future of the F-35 fleet engaged in operations in the region.

In a recent comment made during an audit at the Chamber of Deputies Defense Commission, Finmeccanica CEO Alessandro Pansa highlighted that, with the participation in the F-35 program “the Italian industrial system brings home potential returns for $ 10 billion” and jobs exceeding 5,000 people.”

The development of these potentialities “depends on our capability to use the infrastructures which have been created to build components and to provide maintenance related to avionics and electronics both for the European aircraft and the US aircraft based in Europe. There’s no other European plant with the same requisites as our plant in Cameri.”

Pansa also underscored that 90 Italian companies are involved in the program and so far contracts have been let for $765 million. (From the Italian newspaper, Italia Oggi, Oct. 17, 2013).

During my visit to the plant, it was obvious that the workforce is a mix of older and younger workers. From the human capital perspective, the workforce provides a significant boost to the future of Italian aerospace and defense.

The Mediterranean and the Middle East will be a busy operational area for NATO and allied forces. The F-35 fleet that rolls out from a diversity of users will need the kind of operational and maintenance support which can be provided at Cameri. The Italians have built major warehouse facilities to hold parts for the F-35 as well as providing maintenance bay accommodations secured to collateral SECRET. With the IT system which can manage parts stamped with common parts identifiers, it should be straightforward to manage the inventory capable of supporting an allied fleet.

A way to look at this would be the shape a graphic as follows with Cameri as the hub to support the Western and Eastern Mediterranean and the entire sweep of allied F-35 fleet operations.  This could include the U.S. Air Force, the U.S. Navy, the U.S. Marine Corps, the Italian forces, the British forces, the Norwegians and others.

The Italians understand the F-35 fleet concept and have laid down an infrastructure to support it AT THE SAME TIME as they have built their FACO and wing production facility.

As we have written elsewhere, the F-35 fleet is at the heart of a reworking of US defense strategy in the Pacific.  And the Japanese emulating in part of the Italian example can position themselves for fleet support as well.

The Italian approach to the F-35, reinforces the strategic realities and requirements for Italy and its allies.  It is difficult to imagine the U.S. operating in the Mediterranean without access to Italian bases.  With the F-35, Italy can enhance its business in support of the fleet and the USAF operating in Europe as well.

In addition, the operation of allied fleets as well as land-based air can be supported in regional operations as well.  The Italian Navy’s Cavour will operate the Bs, along with the British Queen Elizabeth and the US amphibious fleet as well.  U.S. large deck carriers will operate the Cs which have significant commonalities with the As and Bs to be operated by the Italian Air Force.  This provides significant possibilities for support for the U.S. Navy’s F-35C fleet at Cameri as well.

In other words, the area of strategic operations for the Italian forces, those of allied forces operating in the Mediterranean and the Middle East, can dovetail on support from Cameri.

Hidden inside the program is the inherent possibility of naval and air forces collaborating much more effectively than in the past. The reach of the F-35 fleet, which conjoins aircraft operating either from land or sea, is a central combat capability for Italy and its allies in regional operations.

A corollary lesson being learned after a close look at the Cameri FACO is the impact of a global manufacturing system upon the F-35 enterprise.

By standing up this facility, Lockheed Martin (LM) is working in partnership with AAeM to shape a new manufacturing facility. Lockheed is not simply transmitting information to the Italians but is also learning from AAeM about ways it can improve production at the Fort Worth F-35 plant.

In other words, Cameri is not just about building the F-35; it is about U.S. and allied investment in an ongoing process improvement to the manufacturing of the fifth generation fighter.

Also inherent in the process is the creation of a new approach to US-allied collaboration. The classic trans-Atlantic programs have atrophied and will be replaced by blended production approaches, which shape capability shared across the partner nations.

Debra Palmer, the Lockheed Martin general manager, provided insight into how the process has worked. Expats come to help standup the entire project and system. There are about 30 expats now at Cameri.

The second group includes what she calls “long term TDY;” these are technicians and process specialists who come to the plant for a few months and work on training specific tasks.

The third tranche involves surge support from US technicians who come for less than a month to provide support for a very specific task.

In reverse, Alenia Aermacchi has sent supervisors to Fort Worth for orientation and training in the F-35 program for up to two years at a time.

This is an aspect of this evolving Euro-Atlantic collaboration built into the F-35 program and it is clearly not a one-way street.

Lockheed has learned ways to improve their manufacturing processes at Fort Worth. This should lead to significant improvements and processes with savings over time, a process likely to be repeated as the Japanese stand up their plant.

In short, Cameri is not just about assembling Italian planes or those of selective European partner nations. It is about the evolution of the future F-35 fleet and becoming a key part of a global production system.

As I wrote many years ago, the F-35 is about culture change.  This encompasses the manufacturing and support of the program as well as the concepts of operations that guide the F-35’s use.

Robbin Laird, a member of the Breaking Defense Board of Contributors, is an international defense consultant and owner of the Second Line of Defense website.