PARIS AIR SHOW: After investing 20 years, substantial amounts of cash and using the time of some of its vaunted and scarce Skunk Works engineers, Lockheed Martin today announced it is handing off its Hybrid Airship to a commercial reseller. 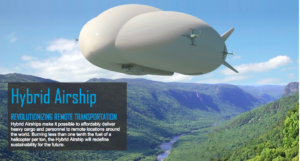 While Orlando Carvalho, head of Lockheed’s mighty aeronautics business, made clear to me that the company would handle any military sales should any military show interest, the announcement seemed to mark a new phase in the company’s approach to what has been a perennially promising approach to moving large cargo over long distances.

Lockheed is not the first company to have overestimated the military market for big airships. Blue Devil 2 fell to earth even after Breaking Defense Board of Contributors member David Deptula, former head of SIR for the Air Force, led the company. (He was, of course, disciplined for his work at Mav6, having being barred for doing business with the federal government until 2016 ) Perhaps the most successful effort so far has been Raytheon’s JLENS (Joint Land Attack Cruise Missile Defense Elevated Netted Sensor system) which has successfully detected and helped destroy cruise missiles and swarming small boats.

Today’s announcement here was that an Atlanta-based company, Hybrid Enterprises, will now accept orders for commercial production variants of the hybrid airship. “We have completed all required FAA certification planning steps for a new class of aircraft and are ready to begin construction of the first commercial model and the completion of the FAA Type certification process,” Carvalho said in a statement. The hybrid company is headed by Rob Binns, formerly with Pegasus Aviation.

Binns told us he saw the airship was ideally suited to operating in remote and inhospitable areas, those not served by roads or airports. The ship can land on just about any flat surface. It functions a bit like a hovercraft on landing: When the pilot reverses the fans on the underside of the ship, it creates a vacuum, anchoring the ship to the ground. That allows it to operate without the masts and tethers and other encumbrances that afflict more conventional airships.

There is one military application that Binns thought likely: HADR (Humanitarian Assistance Disaster Relief) operations. However, that would probably mean the Marines or Army would lease the airship for the duration of the mission.

It will be interesting to see how the FAA handles certification for a new type of aircraft and whether it believes the ship is as ready for commerce as Binns does.