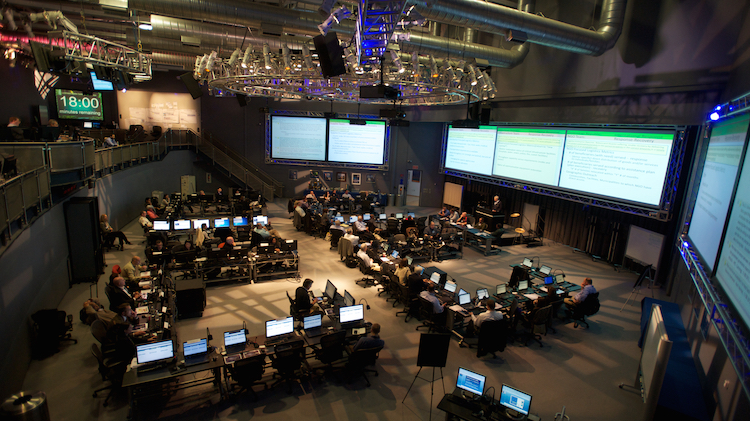 WASHINGTON: Lockheed Martin views the multi-domain warfare concept as so important it is funding and holding a series of classified war games to explore strategies, Concepts of Operation and weapons to see how they might perform taking on an A2/AD opponent. The second game begins today and ends Thursday.

As Breaking D readers know, the Multi-Domain approach is relatively simple in concept: use data from below and above the sea, from the land, from the air and from cyber and space, gather it together, analyze it at incredible speed and then attack the enemy from whatever domains and in whatever ways a combination of machines and humans decide will work best. The Air Force is in the early stages of pursuing a Multi Domain Command and Control system (MDC2) to help make this possible. The results of this war game will be provided to Brig. Gen. Chance Saltzman, who leads the MDC2 Enterprise Capability Collaboration Team (ECCT).

The game, with 40 players and 12 observers from the Defense Department and FFRDCs such as Mitre and the Aerospace Corp., is being held at Lockheed’s Center for Innovation in Suffolk, Va., Lockheed Martin’s C4ISR vice president Rob Smith says. The exercise will use one team designed to reflect the integrated nature of multi domain warfare. The other will be a more traditional team.

One of the most interesting questions this game will help test is just how and where humans best fit into the decision cycle. Cyber warfare’s nature means much of that battle will be nearly automated because speed means life in cyber. The goal of MDC2 is to allow the US to strike faster and harder at an enemy. To that end, Smith believes that the solution may be to have a man on the loop, not in it. So commanders would monitor the battle’s development. They could be prompted by the C2 system when it judges a critical juncture has been reached. Or they may intervene when they see something troubling or promising. But when a human does engage, that slows the system down. Figuring that out, Smith says, is a key goal of these war games.

Former Defense Secretary Ash Carter, who pushed much of the early work on autonomy and data mining, said clearly that humans would always be in the kill chain and machines would not wage war on a human’s behalf. So the results of these games will be intriguing.