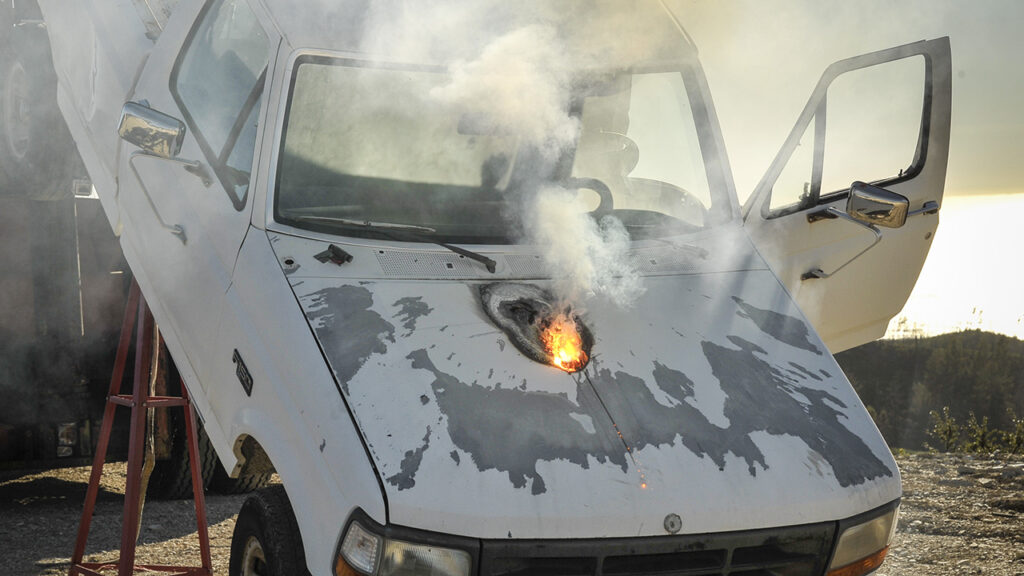 CRYSTAL CITY: The world’s largest defense company is taking a big step towards battlefield laser weapons. In a few weeks, Lockheed Martin will start production of high-efficiency fiber-optic modules that can be wired together into a wide variety of different weapons. Production will start with a prototype 60-kilowatt rocket-killer for the Army, they said, but it could easily scale to larger numbers, higher power, or both. Lockheed envisions its lasers potentially arming Littoral Combat Ships, AC-130 gunships, F-15 fighters, and one day even the F-35.

“We’re testing this facility out with a view to ramping it up,” Lockheed business developer Iain Mckinnie told me when I quizzed him after a roundtable with reporters. “In many ways, it’s… a test production facility, to test out how do we optimize this , to make it as efficient as possible [or] respond as quickly as possible [if], let’s say, if an urgent need came up.”

“I can’t get into the exact dollar figures of the investment,” he added, “but it is certainly very high profile within the corporation.”

The plan is to ramp up not just production but power. Fiber lasers like Lockheed’s generate use large numbers of small modules to generate many low-power beams. These run through fiber-optic cables to a “spectral beam combining” unit that turns the dozens or hundreds of weak lasers into one strong one. Increasing the power is simply a matter of adding more modules — along with appropriate power and cooling, that is, but small individual modules are much easier to cool than a single large “slab” of laser-generating material, the previous state of the art. (Overheating has been a particular problem for lasers in the past, since it distorts the beam into uselessness).

“Our 60 kW design is scalable to over 100 kW, if we populated it with more fibers. Right now the customer’s only asking for 60,” said Lockheed senior fellow Rob Afzal. “That’s kind of the core advantage. You can have a system that you can choose to populate with 10, 20, 50, 100 lasers.”

Using dozens of modules to generate the laser beam, instead of a single central component, should also make the fiber laser far more reliable, McKinnie emphasized. Losing one or even several modules only decreases power by a few percent, rather than shutting the whole weapon down.

The fiber lasers should also be easier to build than older laser technologies. Producing the old-school lasers required “a clean room with PhD scientists that were aligning the systems and testing performance,” Afzal said. “Each unit was being built as a custom one-of-a kind type system.”

“The fiber production looks a lot more like electronics production….done on an open floor…with technicians building the systems, not PhD scientists,” he continued. “You’re seeing an economy of scale. You’re seeing that production can be ramped up or decreased. It’s flexible.”

The fibers that give the technology its name are also the same kind used in commercial fiber optics and cutting lasers. That means Lockheed can exploit innovations and efficiencies of scale from the commercial economy, which dwarfs the defense sector. Key components come straight from the civilian world.

That said, you can’t just stick commercial fiber lasers together and call it a day, Afzal emphasized. The Navy’s prototype laser now in the Persian Gulf uses that off-the-shelf approach to reach 30 kilowatts: It’s made of six commercial fiber lasers that hit the same target but don’t combine into a single beam, which puts a real limit on its performance. To reach higher range and power, Afzal argued, you need to get the subsidiary lasers to combine, and that requires qualities commercial lasers just aren’t designed for.

Commercial lasers also aren’t under the same pressure as the military to reduce weight and power, Afzal added. That’s another reason Lockheed has to design and build its own laser modules in-house. The key is efficiency: Higher efficiency requires less power and less cooling — because the wasted energy takes the form of heat — so it allows much smaller systems.

Past lasers were often as low as 10 percent efficiency: If you put 100 kilowatts in, you got out a 10-kW beam plus 90 kW of waste heat). The state of the art was up to 35 percent: put 100 kW in, get 35 kW of beam and 65 kW of heat. But Lockheed’s laser claims an unprecedented 40 percent efficiency. 40 percent may sound unimpressive, but it’s way better than your car, which gets anywhere from 15 to 30 percent efficiency depending on whether you just look at the waste heat from the engine or account for braking, idling, and so on.

“We’re very excited about this technology,” Afzal said of Lockheed’s fiber laser. “It’s the last piece of the puzzle” to make laser weapons militarily viable, after decades of hope and hype. That’s why the company is investing in production facilities, he emphasized: The goal now is “not just [to] show the science, the engineering, we also want to show the ability to produce it, deliver it, and make it real.”