HUNTSVILLE, ALA.: Lockheed Martin is studying several new air and missile defense systems, from an all-new six-foot rocket to a ship-launched version of the Patriot missile, a top executive told reporters here this morning. In keeping with the military’s emphasis on multi-domain operations that attack old problems from new angles, Lockheed is even looking at launching its Patriot PAC-3 MSE from an aircraft.

“We are looking internally” – i.e. without government funding – “at MSEs going on any platform that could carry the thing,” said Tim Cahill, Lockheed VP for Integrated Air and Missile Defense, speaking on the sidelines of the Space & Missile Defense symposium here. (The Lockheed weapon’s full name is Patriot Advanced Capability-3 Missile Segment Enhancement).That said, he acknowledged, few planes could carry the 19-foot-long weapon. Most of Lockheed’s concepts for air-launched missiles are smaller. 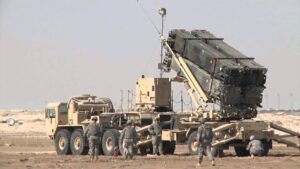 That includes “detailed concepts” for a new six-foot-long missile, Cahill said. Lockheed is looking at a whole range of potential weapons in between its 19-foot Patriot PAC-3 MSE, which kills enemy aircraft, cruise missiles, and ballistic missiles, and the 2.5-foot Mini Hit-To-Kill (MHTK), aimed at incoming artillery shells, rockets, and mortars rounds. Of the various possible lengths, Cahill said, six feet (about two meters) “tends to be kind of a sweet spot size for packaging on various platforms,” from ground vehicles to aircraft to naval vessels.

At the high end of performance, size, and cost, Lockheed also continues to push its THAAD-ER concept. ER stands for “Extended Range,” an upgrade of the single-stage THAAD interceptor that uses a two-stage rocket booster and an improved seeker to hit targets at three times the range of the current system.

Cahill emphasized these systems are mostly being developed with Lockheed’s own money at Lockheed’s own initiative, not for any specific government contract or requirement. (PAC-III MSE is the exception, since it’s now in service with Army Patriot batteries). The new six-foot missile and THAAD-ER are still both concepts. MHTK has some Army funding and some real hardware in testing, but no buyer yet. Lockheed’s also looking at an export version of the mini-missile. 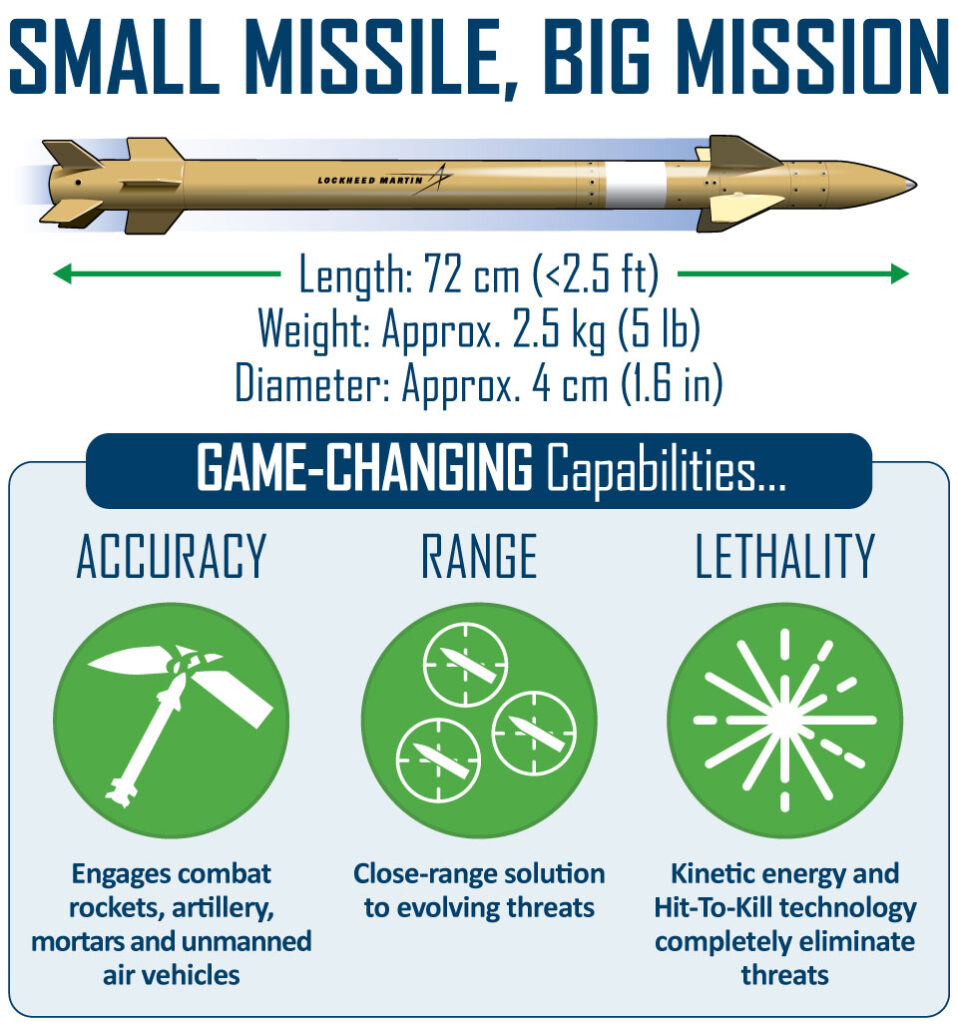 MHTK has been test-fired from the Army’s new Multi-Mission Launcher (MML), which is designed to fire a wide array of missiles for the evolving Indirect Fire Protection Capability (IFPC). Lockheed also has a tailor-made launcher holding 36 MHTKs that Cahill says could fit on the back of a Humvee. A shoulder-launched MHTK might be possible as well, he said, although Lockheed’s not currently working on one.

However, Cahill said MHTK would of limited use against enemy aircraft – as opposed to incoming artillery rounds. That’s because, like Patriot, MHTK relies on the sheer force of impact to destroy a compact target – hence the term “hit to kill” – rather than having an explosive warhead that can riddle a whole airplane with fragments. Lockheed is also working to improve MHTK’s capability to kill enemy drones, which are such small, light targets that they’re difficult to pick up on radar.

So it’s not clear what weapons Lockheed will show the Army at its Short-Range Air Defense (SHORAD) shoot-off next month. That’s a stark contrast to Boeing, which has aggressively shown off its upgraded Avenger anti-aircraft turret mounted on vehicles from 4×4 JLTVs to 8×8 Strykers to tracked Bradleys. Cahill was cagey, though he said Lockheed would definitely participate – by putting some of its missiles on Boeing’s turret.

“We don’t have a launcher system like Avenger to field,” Cahill said frankly. “We’re talking about what interceptors we might put on an Avenger to go through that demonstration.”

September’s shoot-off is part of the Army’s urgent quest for an interim SHORAD solution. Beyond that, though, is a longer-term SHORAD program, which might give Lockheed time to develop its own launch platform. Said Cahill, “longer term is kind of a different question.” 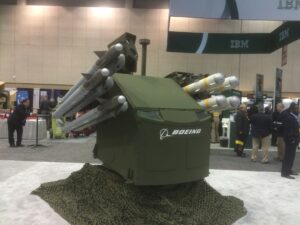 SHORAD protects frontline units against with threats from mortar shells to rocket artillery, from helicopter gunships to low-flying attack jets. At the higher end, against high-flying aircraft and ballistic missiles, Lockheed’s standout system is the Patriot. Eager to build on the weapon’s success with both the US Army and foreign customers, Lockheed is looking at putting Patriot on naval vessels.

But the US Navy and many allies already use Lockheed’s Aegis fire control system shooting Raytheon’s SM-series Standard Missiles. Why, I asked, would they invest time and money in installing a very different system?

The Patriot PAC-3 MSE is a smaller and less expensive missile than the SM-3, since it’s designed to intercept ballistic missiles in the atmosphere rather than in space, which makes the two weapons complementary, Cahill explained. And within its own arena, he said, Patriot is “incredible” for its range, speed, maneuverability, and sheer force of impact.

That said, Cahill caveated: “We’re not at the stage of having the navy or anyone else say we’re really interested in this” – the sea-based Patriot variant remains an internal Lockheed project.

Lockheed is also looking at the highest-end missile system there is, the Ground-Based Midcourse Defense (GMD) that would use Alaska-based interceptors to shoot down North Korean ICBMs. The Missile Defense Agency had long run GMD through a single mega-contract with Boeing, but recently MDA broke up that contract and plans to hold competitions for various parts of. Lockheed is talking to MDA about its prospects, Cahill said: “We think we are competitive. Lockheed Martin does big system solutions.”

Lockheed’s also looking at shooting down hypersonic missiles, at building new sensors, and at better sharing targeting data across existing missile defense systems. But all that is not ready to discuss in any detail, Cahill said, promising to update us when he can.