Posted by Murielle Delaporte on February 19, 2013 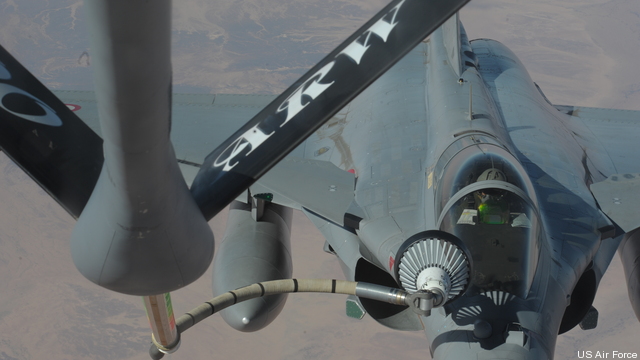 France has been hailed by the people of Mali for driving al Qaeda-linked thugs from their country. Malians greeted French President Francois Hollande with cheers of Vive la France when he recently visited Timbuktu. But the rebels and al Qaeda are not yet crushed, though they have been forced to cede most inhabited territory. The mix is getting richer now with kidnappings that appear to be in retaliation for the French operations claiming seven French tourists, including three children, in northwest Cameroon and seven foreign workers in Nigeria. Murielle Delaporte, a respected French defense analyst, analyzes just what has made the French operations so successful so far. This article includes an exclusive interview with the commander of French helicopter forces in Mali. The Editor.The Mali operation was seen as requiring the rapid insertion of force at the moment when the adversary had begun to aggregate force. The French approach is very much about how to intervene and to trigger coalition operations in order to stabilize the situation with regional partners, rather than to simply stay in place for a long time.

It is “shock and awe” to deter the enemy and to trigger space for coalition success, not “shock and awe” for the sake of staying. As part of the support effort, allies – the US and Canada, as well as many European nations such as Britain, Belgium, Denmark and Germany – have been involved as well. [The photo above demonstrates this. It depicts a US Air Force KC-135 refueling a French fighter during the Mali operations. The Editor.]

But the French effort shows the importance of clear command and control as well as national control over force projection and autonomous capabilities. “Never Without Support” was the praise given by British ground troops to helicopter support during their missions in Afghanistan. The 4,000 French forces currently involved in Mali in the fight against Al-Qaeda affiliated insurgents (more forces than in Afghanistan) are applying this principle to the letter – and in all senses of the words – both at the tactical and strategic levels.

Shock and Awe The French way: Joint Tactical Support at Its Best
A rapid and massive offensive was generated to block the insurgents from reaching Bamako who were within several days reach of the capital.

A month later, as the commander of French Army Aviation in Mali explained in a recent interview: “The enemy has been taken by surprise and is now destabilized. Because of the lightning speed of the maneuver by the Serval force, the insurgents are now fleeing and not willing to fight, as they did not expect such concentration and mobility above their heads.”

Even though the war has, of course, not been won yet, the operation of joint air and ground raids to unloose the Gordian knot of AQIM (Al Qaeda In Maghreb), and other insurgents groups, has been crucial. This effort has been possible due to several factors: The first is the speed of the French forces and the ability to react in a matter of hours as far as air operations were concerned.

For example, on the Air Force side, the very first strikes by the Rafale fighters taking off from the FAB Saint Dizier were done thanks to an unprecedented nine hours and thirty five minutes flight involving five air-to-air refueling.

On the Army side, it took only two days for the French Army Air Mobility Group (GAM for Groupe Aéromobile) to be operational and in autonomous operation after a strategic airlift from the South of France to the capital of Mali involving close to 300 men and 20 helos. As a French officer involved in the operation said: “After leaving Bamako for Sevare five hundred kilometers further on January 26th, then leaving again for Gao on February sixth, five hundred kilometers further, I have available the support tools of nearly a full regiment ranging from my air control tower… to spares allowing me to last for months.”

The rapid surge of the Serval force, which should soon count in particular three battalion-sized Task Forces (GTIA or Groupement Tactique Interarmes), has also been facilitated by France’s historic presence and defense commitments in this part of the world (e.g. the Epervier operation in Chad since 1986 and the UN Unicorn operation in Ivory Coast since 2002).

Among the reasons for this fast and effective deployment of forces was France’s ability to leverage national assets based in nearby African countries. Mobility and concentration of forces have also been rendered possible by good command control, bolstered by joint training and experience between the French Air Force (Rafale and Mirage 2000D fighters and N’Djamena-based JFACC), the Navy (with the amphibious assault ship BPC Dixmude bringing ground elements ashore, as well as the Atlantique 2 maritime patrol aircraft crucial to coordinate CAS operations between Army aviation and ground troops) and the Army.

Army helicopters were able to carry out “reconnaissance or raid offensives as well as support operations, such as fire support for the 2e REP (2nd Foreign Legion parachute regiment) in Timbuktu so it could regroup in the best conditions possible,” according to a French military source in Mali. This airborne operation was the first of this size since Kolweizi in 1978. A second airborne operation was successfully conducted on February 7 in northern Mali by French special operation forces as well as French and Chadian conventional forces to secure Tessalit.

Not Fighting Alone: the Need for Speed in Strategic Support
From the beginning, the French intervention was not seen as an isolated event, but as one designed to clear the path for coalition forces to take over the mission. For example, Chadian armed forces indeed amount to 1,800 men and are part of a total African force of 4,100 being currently mobilized to fight along the side of the French troops and gradually take over as early as the end of next month.

A growing number of allied countries’ are offering logistic and support assets to help sustain French and African armed forces’ sustainability in a theater characterized by vast distances and few roads or other basic infrastructure. Transport aircraft and tankers have been sent early on by the United States and European countries, while the Eindhoven-based European Air Transport Command is increasing its involvement with the participation of a Dutch KDC-10 and, soon, it will be joined by a German A310 MRTT tanker.

In other words, France’s goal is to start reversing the balance between supported and supporting forces as early as the end of March in a secure, responsible and coordinated manner to prevent the “Afghanisation” of the conflict feared by many. From this point of view, European military training of local forces, which is also kicking in, will also be a key factor to make sure African ground troops have the best chances to secure the whole land of Mali.

Recent progress in Somalia with the EU training mission (EUTM) now under the command of Brigadier General Gerald Aherne from Ireland (in two years 3,000 Somali troops have been formed in police and anti-terrorist missions) feeds the hope among allies that, after more than a decade of ground entanglements, a long term success of a new type of lighter footprint coalition support is attainable.

Murielle Delaporte is editor of the French magazine Soutien Logistique Défense and co-founder of the US website, Second Line of Defense.