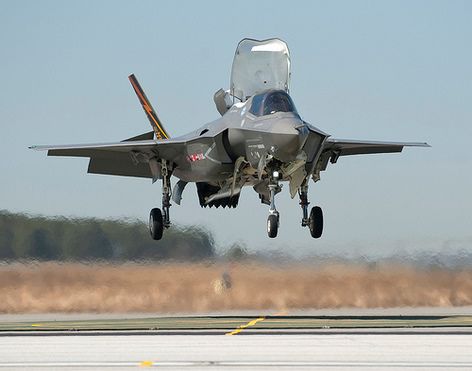 Watch the F-35B, the Marines’ fighter of choice, execute a very cool maneuver in this video, taking off straight up into the sky.

While very cool, this is not something the Joint Strike Fighter is actually expected to do very often. For one thing, it requires enormous amounts of fuel. Instead, the B model is principally designed to do very short take offs, for example from the truncated deck of an amphibious warfare ship. (The inevitable military acronym for this kind of aircraft is is STOVL, “short take-off/vertical landing”). There isn’t often a good tactical reason for the plane to head straight up, using much of its almost 42,000 pounds of thrust from the Rolls Royce lift fan and Pratt & Whitney‘s main F-135 engine.

“While not a combat capability, VTOs [that’s Vertical Take Offs for those who don’t live, eat, and breathe this stuff] are required for repositioning of the STOVL in environments where a jet could not perform a short takeoff. In these cases, the jet, with a limited amount of fuel, would execute a VTO to travel a short distance,” lead contractor Lockheed Martin noted in its statement about the flight.

You can be sure, however, that the Marines will note this as yet another good argument for the F-35B as they look across the Pacific at small states like Singapore and the scattered islands of Japan and neighbors such as the Philippines.