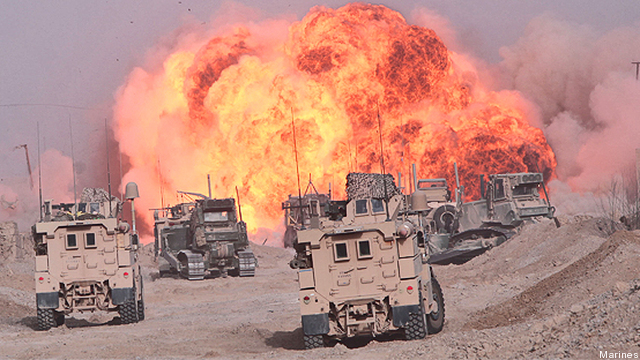 QUANTICO, Va: Even though the administration’s strategic guidance swears off “large-scale, prolonged stability operations” while emphasizing air and naval forces, the lessons that ground troops learned in Afghanistan and Iraq will remain vitally relevant, both because we will still do stability operations in the future and because those skills apply to other kinds of conflicts as well, declared a senior advisor to the Marine Corps Commandant.

“We’re going to do more of this in the future, not necessarily less,” said Brig. Gen. H. Stacy Clardy, the Marines’ operations director. After 10 years of war, he said, “we’ve changed what we consider to be our core competencies.” Alongside the traditional Marine skills in attack, defense, and amphibious operations, “we’ve included now, as [has] the Army, stability operations.”

Even when future Marines can achieve their objective quickly — for example, a “non-combatant evacuation” (NEO) to get US diplomats and tourists out of a danger zone — they will still benefit from an appreciation of foreign cultures and the ability to interact with non-US civilians, officials, and security forces. So, said Clardy, the Marine Corps must give its troops “the tools to engage with populations, even if only for a limited period of time.”

Clardy was speaking at a conference at Marine Corps University, the hub of the service’s professional military education system, centered on the teachings of the late Col. John Boyd. Boyd was an Air Force fighter pilot whose research into Korean War dogfights led him to deemphasize high technology as a decisive factor. Instead Boyd ascribed fundamental importance to the human factors of how opposing combatants struggle to out-think each other, with victory going neither to the strong nor to the swift but to the most mentally agile. A fiery and confrontational prophet little honored in his own service, “Genghis John” had a lasting influence on the Marine Corps, and lately a Boyd-like fascination with human factors is rising also in the Army.

“Without what John Boyd proposed and what the Marine Corps absorbed,” said Clardy, “I’m not convinced we would have been successful in Iraq at all.”

Clardy and other attendees at the conference argued that Boyd’s emphasis on human factors — mind over matter, people over technology, skillful maneuver over raw power — holds true not just in a “hearts and minds” counterinsurgency campaign but even in no-holds-barred combat. After all, said Clardy, for a Marine or Army squad in Afghanistan that must defend its base, patrol, and react to ambushes, “the world for you on a daily basis looks a lot like any conventional op.”

The speaker following Clardy, Marine Captain Paul Tremblay, described his own use of Boyd’s principles when he moved from winning “hearts and minds” — albeit in one of the most violent areas of Afghanistan, Sangin (pictured) — to an all-out assault against hardcore Taliban. His reinforced rifle company, less than 200 Marines, was ordered to clear a wooded valley estimated to hide 350 enemy fighters. The enemy’s arsenal included a heavy machinegun powerful enough to have savaged a Special Operations helicopter that had come too close in an early battle.

So instead of a massed landing right on top of the enemy, Tremblay split his force in two and came in simultaneously from the north and south. Then he split them still further into 15 small units, each maneuvering independently and aggressively to take the enemy from a different direction.

“We swarmed like ants,” Tremblay said. The overwhelmed Taliban commanders could not keep up with so many separate threats and lost control of their panicked men, who began to flee. “Within four hours we killed 41 Taliban,” said Tremblay, “most of which were in the first five minutes.”

Such highly decentralized “distributed operations” are what many Marine and Army officers consider the wave of the future. “That’s where our success is resonating from, is the small unit level,” Brig. Gen. Clardy said. “Everything had to be decentralized.”

But these tactics also run the risk that each small unit might be isolated, caught, and overwhelmed. In Iraq and Afghanistan, US troops have relied on modern communications to call for help and rapidly responsive airpower — helicopters, jets, and drones — to provide it. An enemy more technologically savvy than the Taliban, whom one Marine drone squadron commander likened to “cavemen,” might be able to jam those communications and shoot the aircraft down, leaving ground troops on their own.

At a recent Army-led seminar on future warfare, part of that service’s “Unified Quest” series of exercises, one Australian officer declared, “there’s two ways to cripple the American military: Gas and comms [communications].” Other participants angsted that medical helicopters would not be able to evacuate casualties in the face of enemies bearing shoulder-fired anti-aircraft missiles, known as MANPADS (man-portable air defense systems).

But one officer countered, “guys may be shootin’ crap at our airplanes but we’re shooting at them also.” Instead of hanging back for fear the enemy may disrupt our operations, he said, we need to press forward aggressively to disrupt his: “The way to stop MANPADS is you kill the man.”

Said another participant, “[even if] there’s a threat out there, we’re still going to fly.”

“We’re still going to fly,” came the chorus from several points around the room, and the participants went back to brainstorming the next war.