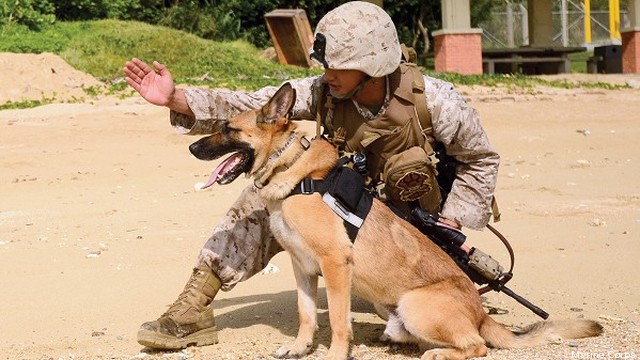 WASHINGTON: The job of detecting deadly roadside bombs for the Marine Corps is going to the dogs. And that is just the way the Marines want it.

The Office of Naval Research wants all Marines — active duty, reserve or retired — who served alongside the Corps’ real-life devil dogs in Iraq and Afghanistan to weigh in on how to better use canines on the battlefield. Soliders’ input will focus on improving “stamina and stress management” of the dogs serving in the Improvised Explosive Device Detector Dogs program, according to a statement from Marine Corps Systems Command. “The data gathered will help officials revise how IED dogs are selected, conditioned and trained,” command officials say.

Despite the millions the Pentagon has spent on new systems and equipment to detect IEDs, the department has yet to come up with something to trump a dog’s sense of smell. So as the old saying goes, if you can’t beat ’em, join ’em. Which is what the Marines are doing with the ONR study. “The warfighter feedback loop is an integral part of the ongoing effort to improve the IDD program . . . the [study] is one tool we use to assist in capturing this type of information. Lt. Col. Kenneth Burger, the head of the program, said in today’s statement.

The Marines bomb-sniffing dog program started in 2007 with only a handful of canines in country, according to news reports at the time. By the time the soldiers of the 2nd Marine Division stormed into the Taliban stronghold of Marjah in southern Afghanistan last February, that number had grown into the hundreds. Marine Corps dogs and their handlers scoured the mud-brick city in southern Afghanistan for hidden homemade bombs left by retreating Taliban forces. These war dogs proved their mettle in that fight. But their contributions in the field didn’t get much limelight until one late night above a small town in northern Pakistan. A military dog was part of the Navy SEAL team that raided the Abbottabad compound of Osama bin Laden and killed the infamous terrorist leader in May.