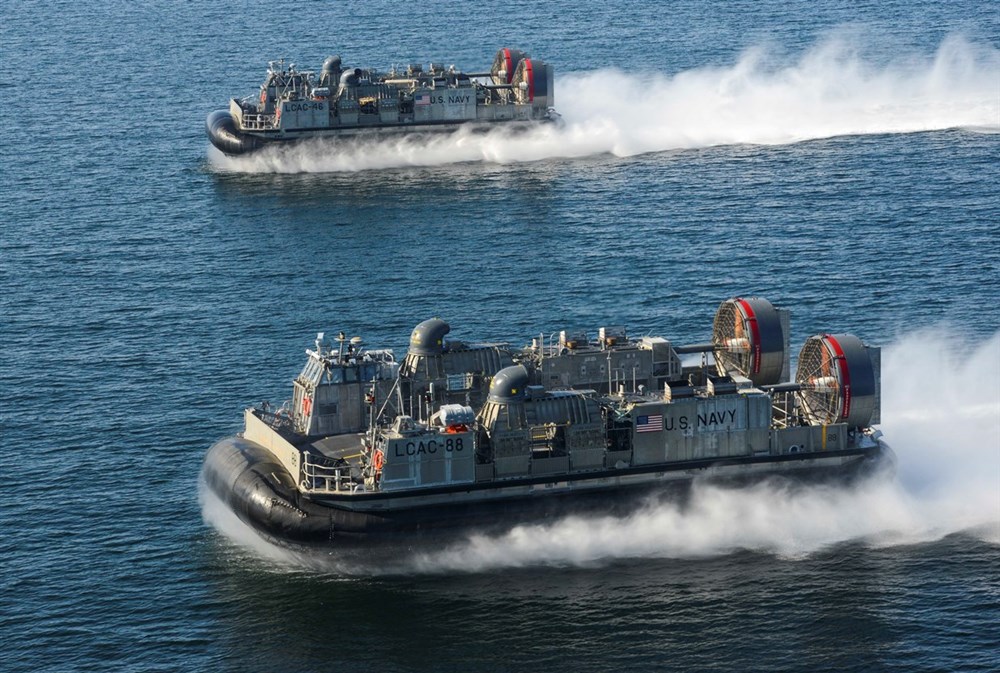 Marine hovercraft (LCACs) on maneuvers in the Baltic Sea.

ANNAPOLIS: Small, fast missile boats clear a path through coastal waters for Marine landing forces. Robot jet skis, surfboards, and mini-subs scout out landing sites ahead of the human force. High-speed landing craft carry troops, their gear, and vehicles to the beach. Those are some of the ideas the Marines are experimenting with as they seek new ways to get ashore in the teeth of high-tech defenses.

“We have to find a solution to getting Marines to shore, from over the horizon, at something greater than seven knots (8 mph),” the swimming speed of the existing Amphibious Assault Vehicle (AAV) and its Amphibious Combat Vehicle (ACV) replacement, said deputy Marine commandant Lt. Gen. Brian Beaudreault. “We simply have to get there.”

Beaudreault’s technological wishlist includes ship-launched large drones for long-duration reconnaissance, an alternative to the Stinger missile for short-range air defense, and large numbers of long-range rockets for precision and massed artillery fire. But nothing got the general more fired up than the need for speed in getting ashore. 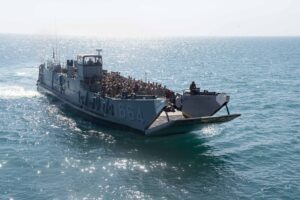 Helicopters and tiltrotors can solve part of the problem, but they can’t carry troops, tanks, and supplies in bulk. The Navy has both lumbering World War II-style landing craft (LCUs) and faster hovercraft (LCACs), but not many of either. A large-scale landing operation would require a lot of Marines to come ashore in painfully slow and thus vulnerable Amphibious Assault Vehicles (AAVs).

“You’ve got to have high speed connectors (i.e. landing craft),” Beaudreault told the annual Expeditionary Warfare conference here. “We must find a high-water-speed vehicle on the surface. We must.” 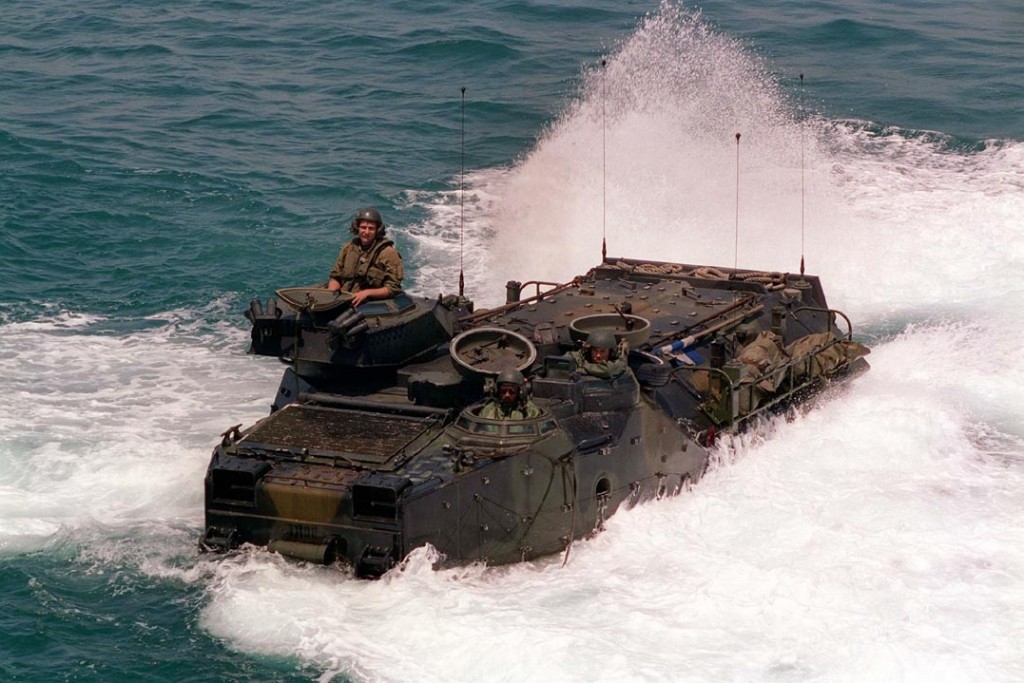 Why the hurry? Traditional amphibious operations follow a stately sequence: scour the sky of enemy aircraft, sweep the seas of enemy ships and subs, mass the fleet offshore, bombard the beaches, and only then send in the landing force. That’s worked well since the second half of World War II, when we could dominate the air and sea. But our dominance is now in doubt. 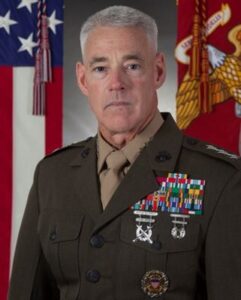 Even terrorist groups like Hezbollah and the Islamic State now have anti-ship and anti-aircraft missiles, drones to find targets for them, and wireless networks to command them. Nation-states like Russia, China, and to a lesser degree North Korea and Iran can set up long-range layered defenses known as Anti-Access/Area Denial (A2/AD) systems. Wearing these defenses down from the outside in, using only long-range strikes, may take too long to rescue threatened allies, assuming we don’t just run out of missiles first.

So all the US services are studying ways to penetrate A2/AD bubbles and destroy them from the inside out. For the Marines, that means landing in areas that are not yet under friendly control and establishing forward bases to launch further attacks. Don’t think of Iwo Jima, where Navy control of air and sea allowed the Marines to land: Think of Guadalcanal, where Marines landed to seize an airstrip (Henderson Field) that in turn helped win the battle at sea.

“We’re not going to just back off and operate from greater distances,” Beaudreault said. “We’re going to be inside the adversary’s A2/AD envelope. That’s the role of the Marine Corps.”

Since the landing sites will now be within hostile waters and airspace, the fleet can’t just line up offshore and unload landing craft: They’d be sitting ducks, then dead ones. Instead, the Navy’s big, expensive, hard-to-replace ships will stay perhaps 65 nautical miles offshore — out of the range of many missiles, though hardly all — and launch the landing force from there. That’s not a distance you want to cross at eight miles per hour, especially under fire. Hence the need for speed.

Beaudreault and other Marines are usually looking at they call “connectors”: various kinds of landing craft. The idea is to have a vessel optimized for the water carry a vehicle optimized for the land, rather than try to design one machine for both. 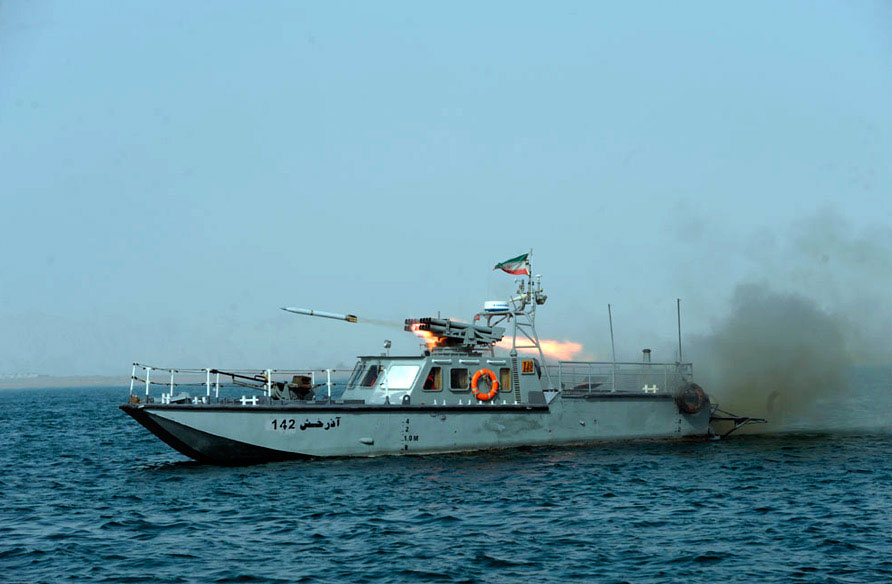 “Some of the technologies we’re looking at for the future may have that high-water speed capability, but they may not be a manned system,” said William Williford, executor director of Marine Corps Systems Command. “In an amphibious assault today, it may be better to utilize an unmanned capability as the initial assault.” Once the relatively expendable robots had softened up the defenses would the humans land in a second wave.

In the recent Advanced Naval Technical Exercise (ANTX) at Camp Pendleton, the Marines put out an open invitation for private sector innovators to show off new ways to come ashore. “We weren’t sure what to expect,” said Lt. Col. Dan Schmitt, who works for the testing branch of the Marine Corps Warfighting Laboratory. The variety of what showed up was impressive and included robotic surface and underwater vessels, add-on kits to make AAVs and other manned vehicles self-driving, and new propulsion systems, some of them “capable of high water speeds.” There was even a self-driving jet ski and “an autonomous surfboard,” originally developed to track dolphins but repurposed for military reconnaissance. The guiding principles, Schmitt told me, are that the tech should be “small, smart, cheap, and often — not always — disposable.” 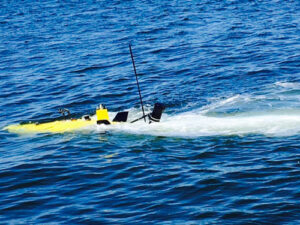 The Marines are also experimenting with new manned craft that can land small forces through A2/AD defenses, said John Berry of the Marines’ Combat Development & Integration office. The concept calls for “long-range, low-signature boats so you can project marines ashore from the distance to do advanced force operations, amphibious raids, (etc.).”

Operating close to shore, the Navy and Marines will also need “some type of screening / scouting surface forces,” Berry said. “I’m talking about missile boats.” Many countries use them for coastal defense, although the US Navy has historically considered them too fragile and short-ranged. Against A2/AD, however, where the US Navy would not want to risk its big ships close to shore, missile boats might play an important role: small enough to avoid detection most of the time, cheap enough to be relatively expendable if caught, and well-armed enough the enemy couldn’t just ignore them. They could scout ahead of the landing forces and then protect their flanks from enemy craft.

This range of weapons would make up a very different amphibious assault force than the one the Marines and Navy have relied on since World War II. But it might be the force they need.