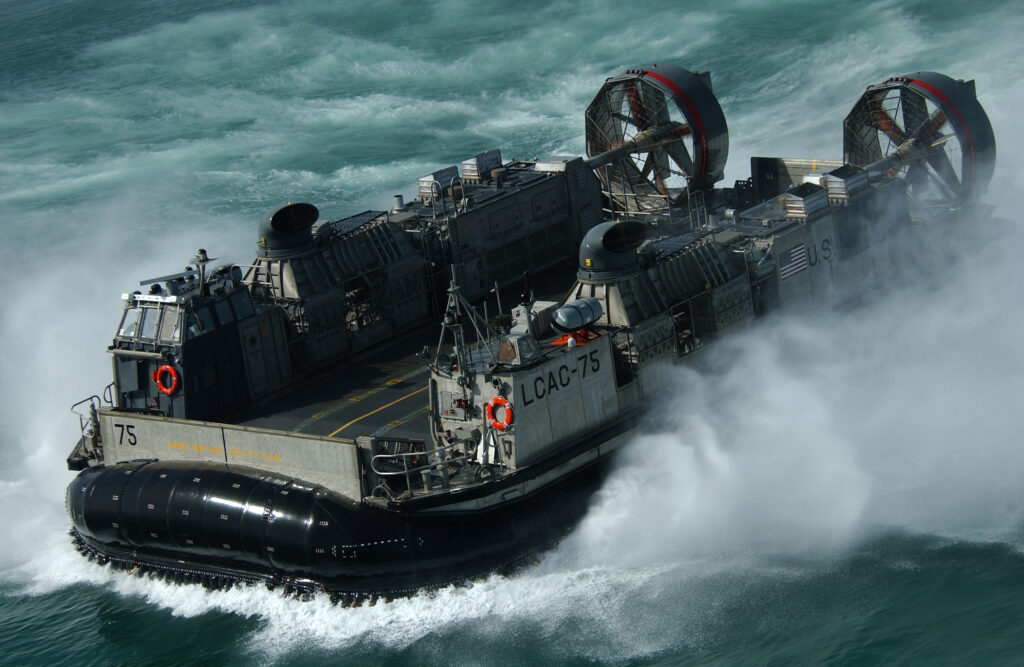 The Navy and Marines are experimenting with converting the standard LCAC transport hovercraft, seen here, into an unmanned platform for rocket launchers.

QUANTICO: A hovercraft that shoots salvoes of rockets. A speedboat that turns into a submarine. A mobile 3D printing factory. A big wooden box with wings (yes, really). And, of course, more drones than you can shake a stick at (because they swarm).

These are just a few of the roughly 100 technologies the Marine Corps will check out in its upcoming experimental wargame at Camp Pendleton. About 50 are ready for real-world demonstrations. Another 50 will just be on display, this time, though they might be ready for field tests by the next “S2ME2 ANTX” (that’s Ship To Shore Maneuver Exploration and Experimentation Advanced Naval Technology Exercise 2017).

Getting all this tech together has been a nine-month crash program, with top Marine and Navy leaders bypassing the normal bureaucracy to counter new threats. Here’s a quick look at some of my fave technologies.

My personal favorite is the big wooden box with wings. In essence, it’s an unmanned update of the wood-and-canvas gliders used by airborne troops in World War II. Formally known as RAIN, for Revolutionary Airlift Innovation, it’s basically a cargo crate that delivers itself (once). You can fill the box with almost a ton of cargo (1,600 lbs), load it on a transport aircraft — CH-53 helicopter, MV-22 tiltrotor, or KC-135 turboprop — and kick it out the back in flight. Then the wings pop out, turning the box into a glider, and a computer brain guides it to its destination, up to 75 miles away. Even if you’re resupplying a unit in a city, no worries. The glider can pop a parachute to land between the buildings.

It’s crude, it’s ugly — and it’s brilliant. The entire prototype cost $600, manufacturer Logistics Gliders Inc. says, “less than 1/3 of the cost of nylon used in today’s cargo parafoils,” which can’t deliver cargo 75 miles away from the aircraft that dropped them. The RAIN glider would make it much easier to deliver supplies to widely dispersed units, which is how the Marines and Army expect they’ll have to fight on future battlefields to avoid being targeted for precision strikes. They also expect enemies with advanced anti-aircraft missiles to keep US air support away: That rules out conventional airdrops, but not necessarily releasing a glider 75 miles out. The manned aircraft can turn back to safety, while the glider — with no engine and almost no metal parts — slips in undetected. If the glider is shot down? Well, we’re out some supplies, but no one died.

Such supply systems may seem less sexy than new weapons, but combat troops can’t get anywhere or shoot anyone without logistical support, and logistics has been a signature US strength since the Civil War. There are several other logistical systems under study for this exercise, including two different kinds of fuel bladders; Napoleon’s army may have marched on its stomach, but America’s runs on gas. There’s also a computer system called Semantic ITV (In-Transit Visibility) to better track supplies as they move from depot to front.

Ultimately, the military wants to dispense with supply lines altogether and have frontline units 3D print everything they need. That ideal’s a long way away, but one of the most interesting systems being tested at Camp Pendleton is a significant step towards it. EXMAN, short for Expeditionary Manufacturing, is basically a big metal box that looks like a standard shipping container. Inside, it’s more exciting — filled with additive manufacturing equipment: a 3D printer, a 3-axis mill/lathe, a scanner, and two workstations loaded with software. While such mini-workshops can’t 3D print ammunition (yet), they can quickly churn out repair parts for broken equipment.

Rise of the Robots

In the future, the Marines will want a few good men and a lot of good robots. Thousands of Marines died in the amphibious landings of World War II, and weapons have only become more lethal since, so the service wants to send waves of robots on, above, and under the water to scout ahead, strike targets and decoy attacks away from the human landing teams. So it’s no wonder that a third of the technologies on which the Marines provided details (by my rough count) involve unmanned vehicles.

These systems range from the ExEye, a scout quadcopter that fits on your hand, to self-driving versions of the 29-ton Amphibious Assault Vehicle. (There’s also a project to build a life-size, unmanned decoy AAV to draw fire from the ones full of Marines). Some of them have been in the press before, such as the golfcart-sized MUTT transport or the LOCUST swarm of drones, while others are new and strange, such as the Submaran, whose body moves along just below the surface of the water but has a tall sail to harness both solar and wind power.

Most of the unmanned systems are scouts. For example, Urban Reconnaissance & Situational Awareness (URSA) uses a modified off-the-shelf quadcopter to fly through buildings ahead of the troops and transmit back detailed interior maps. The Rapid Assessment Capability (RAC) is a quadcopter that looks for naval mines. Razor is a mine-hunting robot that moves by flapping its fins like a fish. The Visual Automated Scoring System (VASS) connects scout drones to the fire control systems on Navy ships, providing precise targeting data for 5-inch guns.

While most of the systems being tested are quietly useful — for logistics, for surveillance, for targeting — there are a few showy technologies. One brings to mind James Bond, the HyperSub, a speedboat that turns into a submarine, or a submarine that turns into a speedboat. Inventor Reynolds Marion has built a working prototype, the Fathom, shown in the video above.

Frankly, at first I wasn’t sure what the HyperSub was actually good for, as a military vessel rather than a Bondian toy. Then it hit me: surveillance. A smaller, unmanned HyperSub could travel ahead of the fleet at high speed on the surface, then submerge to sneak through the enemy defenses, then resurface close to shore to scan potential landing zones for obstacles and enemies. If the scout HyperSub avoids detection and survives, it can submerge and slink away again.

Once you’ve detected an enemy, of course, it’s helpful to destroy him. There are many technologies being tested at Camp Pendleton that help find targets, but only a few that actually strike them.

Probably the most useful in the widest range of situations is the Advanced Capability Extended Range Mortar (ACERM), which turns the standard 81 mm mortar — one of the most common weapons in the Army and Marines — into a precision weapon with a 12.5-mile range. The ACERM’s description boasts it can it moving targets, not just static enemy positions, and alter its trajectory to strike targets between buildings or other hard-to-hit spots.

When you absolutely, positively have to blow up everyone right away, however, you need more than a mortar. You need a Multiple-Launch Rocket System like the MLRS or HIMARS. If you’re a Marine making a landing, you need it mounted on something that can float. The Naval Surface Warfare Center’s solution to this problem is the Autonomous Landing Craft – Air Cushion. A-LCAC takes the venerable five-man Navy hovercraft, capable of carrying an M1 tank from ship to shore, and turns it into an unmanned rocket launcher that skims over the water at 45 miles an hour. That’s the kind of firepower that can clear a beach in a real hurry.